Some call it an eyesore, while many others see it as one of Sudbury's most easily identifiable and iconic landmarks. By the end of the year, Vale is expected to determine the future of the Superstack, and decide whether or not it should be torn down.
0
Nov 3, 2014 8:58 PM By: Jonathan Migneault 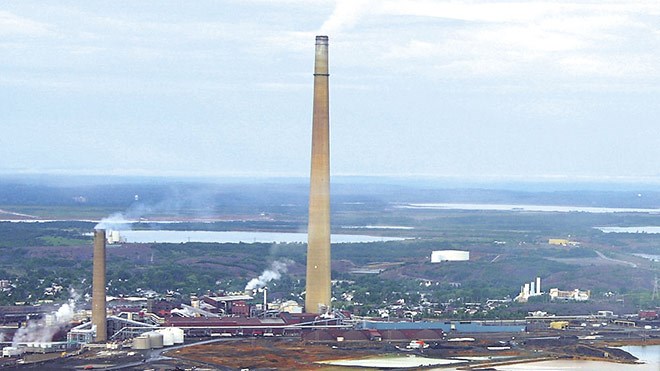 Miner Vale report a loss of US$12.1 billion for all of 2015, the company reported Thursday, pointing the finger at plummeting commodity prices and the soaring value of the U.S. dollar. File photo.

Some call it an eyesore, while many others see it as one of Sudbury's most easily identifiable and iconic landmarks.

By the end of the year, Vale is expected to determine the future of the Superstack, and decide whether or not it should be torn down.

“The reality is that there's very little SO2 (sulphur dioxide) coming up the stack and it doesn't make a lot of sense for use to use the stack further,” said Kelly Strong, Vale's vice-president of Ontario and UK operations.

Strong addressed the Sudbury Chamber of Commerce Monday, where he updated the city's business community on Vale's operations and plans for the future in Sudbury.

Strong's update on the Superstack was the day's big announcement.

“It's a huge change for our community,” he said. “There's a correlation between Sudbury and the Superstack. It's a huge landmark.”

When it was built in 1972, the 1,250-foot (350-metre) Inco Superstack was the world's tallest chimney, and the tallest freestanding structure in Canada.

Today, Toronto's CN Tower is the only structure in Canada to surpass the Superstack in height, at 1,815 feet, or 553 metres.

Inco built the Superstack to disperse sulphur dioxide and nitrogen dioxide emissions from its Copper Cliff smelter over a wide area, to lessen the smelter's environmental impact.

But thanks to further advancements to reduce emissions from the smelter, the Superstack may no longer be needed.

The smelter's new output will represent an 85-per-cent reduction from today's emissions rates.

Strong said Vale engineers are also working on a secondary bag house – essentially a giant vacuum, about the size of an NHL hockey rink — to capture dust and emissions.

If Vale decides to stop using the Superstack, Strong said the company will build a much smaller chimney to replace it.

But he said the new stack would still be tall enough to disperse emissions away from nearby communities.

If the Superstack is discontinued, Strong said Vale will need to conduct further studies to decide how to fully decommission the structure.

He said it is possible the structure would be demolished, because Vale would have no reason to continue maintaining the chimney if it is not in use.

There are 81 COVID-19 cases in Northern Ontario
Apr 4, 2020 3:25 PM
Comments
We welcome your feedback and encourage you to share your thoughts on this story. We ask that you be respectful of others and their points of view, refrain from personal attacks and stay on topic. To learn about our commenting policies and how we moderate, please read our Community Guidelines.