Vale mine rescuers tops in Ontario

Mine rescue volunteers from Vale claimed the title of overall winners of the 64th annual Provincial Mine Rescue Competition in Timmins June 5-6.
Jun 9, 2014 7:14 PM By: Sudbury.com Staff 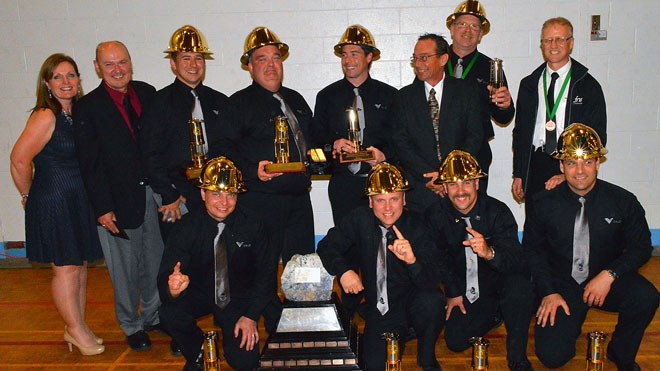 Mine rescue volunteers from Vale claimed the title of overall winners of the 64th annual Provincial Mine Rescue Competition in Timmins June 5-6. Supplied photo.

Mine rescue volunteers from Vale claimed the title of overall winners of the 64th annual Provincial Mine Rescue Competition in Timmins June 5-6.

Team members from Vale's East Mines were crowned with gold hard hats by Workplace Safety North (WSN) and Ontario Mine Rescue for their efforts at the competition.

The team, which won the Sudbury District competition in May, also earned the First Aid Award.

Seven competing teams from across Ontario, selected in district competitions, were evaluated on their firefighting skills, first-aid response, use of emergency equipment and decision-making ability under stress in a simulated emergency underground at Goldcorp Canada’s Dome Mine.

Denis Prevost, mine rescue technician for First Nickel Inc.’s Lockerby Mine, won the award for top technician. Prevost won the Sudbury District competition in May.

Mine rescue team members, the backbone of Ontario Mine Rescue, are volunteer mine workers trained by mine rescue officer/consultants to respond to all types of mine emergencies including fires, explosions and falls of ground, said a news release from Ontario Mine Rescue.

During the exercise, five-member teams had to descend 150 feet down a raise using fall-protection equipment, extinguish a fire, provide first aid to two miners, rescuing one of them trapped beneath a large tire. The entire operation was conducted “under oxygen” (using self-contained rebreathing apparatus).