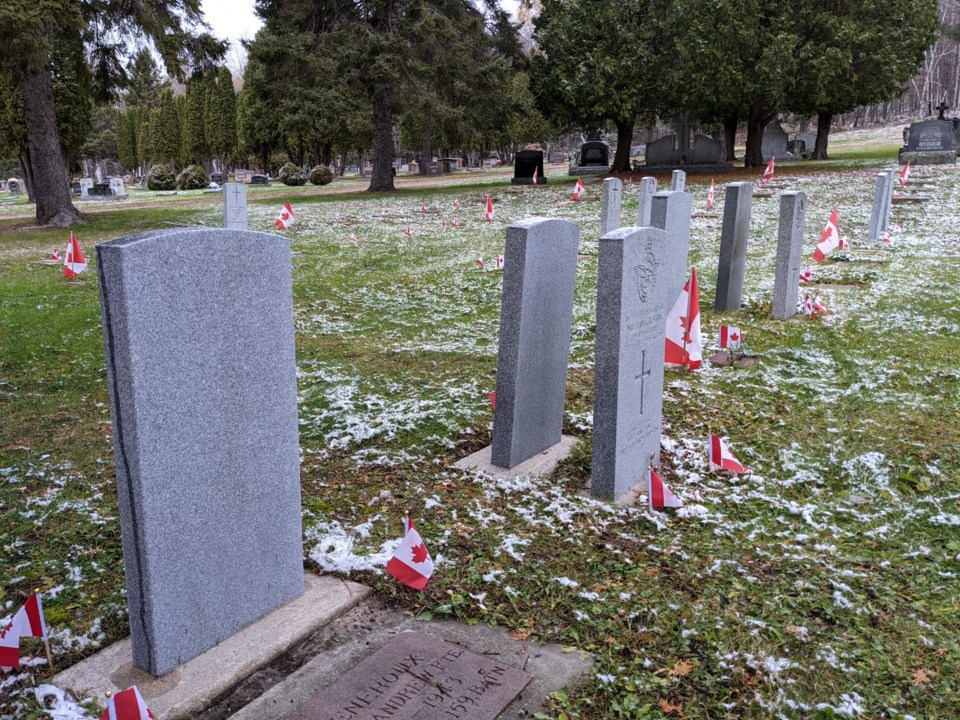 Some cemeteries will be adorned with Canadian flags denoting the gravesites of war veterans as cenotaph and arena services will be altered. Bill Steer for Village Media

Cemeteries are great places to visit. Many might find this strange (totally understood) since cemeteries are often on the back roads.

Cemeteries undoubtedly have some of the most beautiful statues and monuments, amazing artwork. Cemeteries are a bevy of historical facts and cemeteries remind us of the dedication of those who gave their lives for freedom.

Each year on Remembrance Day, we reflect. Some headstones tell compelling stories and there are many community members, Canadian war dead, buried from our past conflicts.

The staging of Remembrance Day ceremonies will be different this year. So a visit to our local cemeteries may be a different way of participating. Look for the war graves icon.

The Commonwealth War Graves Commission honours and cares for the 1.7 million men and women of the Commonwealth forces who died in the First and Second World Wars, ensuring they will never be forgotten. Funded by six-member governments, work includes the building, and now maintaining, markers at 23,000 locations throughout the world.

Something went wrong on the Saturday morning of April 28, 1945. They would have been going home soon, as the story will tell. WWII started Sept. 1, 1939 and ended Sept. 2, 1945. The Royal Air Force pilot was landing his Mitchell bomber at the North Bay Airport when it crashed.

The North Bay Daily Nugget reported, “…its nose, engine and cabin ere a tangled mass of wreckage. Part of the fuselage, including the mid-upper turret, is fairly intact. The falling plane clipped off trees for a considerable distance before it struck the earth.”

Both airmen, killed instantly, were buried with full military honours accorded to them with an attending military escort and firing party.

Doug Newman, Captain (retired), 22 Wing, Heritage Officer, Canadian Forces Base North Bay says the base at North Bay was not a base for ferrying aircraft overseas during that time.

“The Royal Air Force established a flying school at the airport, not a base, a school, that taught Allied aircrew how to fly and navigate over the Atlantic, a fine art in those days. The RCAF set up a seven-man team (includes one driver and one vehicle mechanic) who looked after servicing and maintenance of military aircraft passing through North Bay en route to other parts of Canada, as well as Europe. In essence, the RCAF operation was a kind of highway truck stop for military aircraft.”

Pilots would ferry Hudson, B-25, Mitchell, Dakota and Lancaster bombers overseas. Their destinations would take them via Newfoundland and Iceland to Great Britain, Gibraltar and Egypt.

“Prior to the war’s start about 150 flights had been attempted across the Atlantic—one third didn’t make it. Getting new warplanes to the war overseas was priority, hence the school. Civilian as well as military aircrew from 23 countries trained here. The course was three to four weeks long. Thereafter they went to Dorval and were given a check ride—a flying exam. If they passed, they entered the aircraft ferrying program. Illustrating the dangers, about a year and a half before the North Bay school, the first ferrying flight lost crash-landed in Newfoundland; among the killed was Dr. Frederick Banting, co-Nobel Prize winner in medicine for his work regarding insulin. Banting suffered a severe concussion, was hallucinating and incoherent. While the pilot was away looking for help, he wandered out into the surrounding winter and died of exposure. And even after the North Bay school was established, the dangers or trans-oceanic flying were ever-present.“

“On path to Oxford University, in 1942, (Flying Officer Leslie William Laurence) Davies joined the RAF instead. In 1944, while posted in the Bahamas, ferrying aircraft in Transport Command, he broke his ankle. During his convalescence, he visited friends in Canada, including at the North Bay RAF school, and through either his request or the impression he made on the staff was posted to the school. In essence, if he hadn’t broken his ankle, he would not have visited North Bay, been posted here, and subsequently killed in the crash.”

The men and women, the non-Canadians, are commemorated by special headstones maintained by the Commonwealth War Graves Commission.

The Commission was started by a Royal charter in 1917. Its duties are to mark and maintain the graves of members not buried within their own countries.

Around the world, the Commission commemorates more than 1,694,947 members of the forces in 145 countries. In Canada 18,214 war dead are commemorated at 2,871 cemeteries. All headstones are uniform in size and inscription. At the top is an engraved emblem identifying the specific nationality, rank, unit, date of death and age, along with a religious motif.

Flying Officer Leslie William Laurence Davies and Flight Sergeant William Gribbin, are far from home. They have the sad distinction of being the first air fatalities of any kind, military or civilian, in the North Bay area. Gribbin is buried in St. Mary’s Cemetery off of Golf Club Road and Davies is buried off of O’Brien St. within Terrace Lawn Cemetery.

They, as our many homegrown sons and daughters, were ready for war and became causalities because of it.

Through a visit to our cemeteries, we can salute their lasting contributions. We don’t know if these families ever visited their beloved sons but thoughts and memories can travel great distances. You may see the distinctive Canadian maple leaf or associated military motif on the cemetery marker.

About the Author: Bill Steer