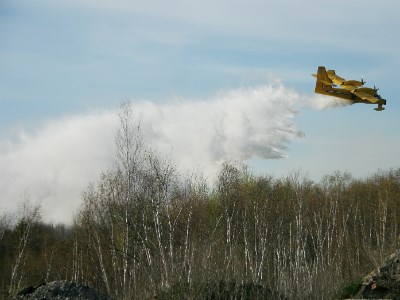 A Ministry of Natural Resources water bomber dumps a load on a bush fire measuring about three hectares in size. The fire was one of three burning near the Highway 17 and Levesque Street intersection. Photo by Arron Pickard.
Three bush fires burning in the area of Highway 17 at the Levesque Street intersection kept Greater Sudbury Fire Services and Ministry of Natural Resources Fire Rangers busy today.

The largest fire measured in at about three hectares, while the other two were smaller, said Greater Sudbury Fire Services platoon chief Darryl McAloney.

Sudbury firefighters were able to handle the two smaller fires on their own, but they called in the MNR and several water bombers to assist in the larger fire, he said.

McAloney wasn't sure of the exact time the calls came in, but at about 6:30 p.m., firefighters had been on scene for about two hours. They quickly got the situation under control.

“It's important to knock them down fast in wind, dry conditions,” he said. “Despite the fact we've had a very wet spring, it still dries out quickly, especially with high sun and no foliage on the trees. Fire is able to spread quite quickly, and every day that's warm and sunny is great for us, but not so much for bush fires.”

These three fires weren't the first bush fires of the season, he said. Greater Sudbury firefighters have been busy with several other fires in Capreol and Valley East the past few days.