Thirty-three per cent of the water pumped through the city's water infrastructure in 2014 was lost revenue, according to a report prepared for the city's operations committee.
Dec 15, 2015 1:50 PM By: Darren MacDonald 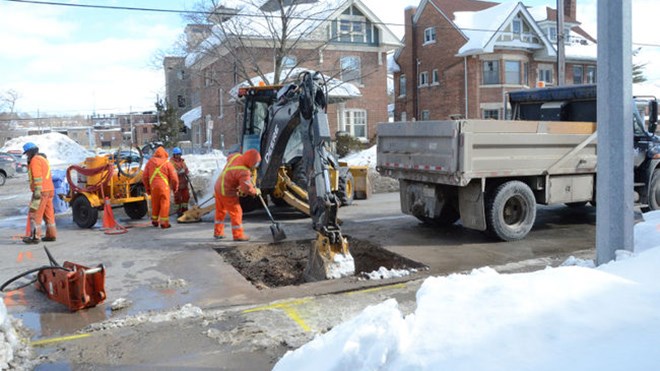 Extreme weather events – including the deep freeze last winter that left many residents without water – contributes to water loss. Thirty-three per cent of the water pumped through the city's water infrastructure in 2014 was lost revenue, according to a report prepared for the city's operations committee. File photo.

Thirty-three per cent of the water pumped through the city's water infrastructure in 2014 was lost revenue, according to a report prepared for the city's operations committee.

Nick Benkovich, director of water/wastewater services, said in a report to council some of the water is lost to things like fighting fires and flushing pipes.

“Some differences are less desirable, such as watermain breaks and are referred to as 'water loss,'” Benkovich said in the report. “Gaps between water production and consumption are a common problem observed in most public water supply systems in Ontario.”

Some water is also lost to theft, although he said it wasn't possible to calculate how much is lost to individual causes. However, it's important to address the gap for a number of reasons, including to keep rates as low as possible.

“The costs for variable resources such as energy and chemicals used to produce the water still need to be covered by the overall water rates,” he said.

The average annual loss since 2000 has gone from a low of 24 per cent (most recently in 2009) to a high of 34 per cent in 2001. The average difference between production and metered water consumption over that time period is 28 per cent.

One of the biggest contributing factors is the old, crumbling water pipes in the city that need to be replaced.

“The average age of CGS infrastructure is 48 years, and as infrastructure ages, more resources including flushing water are required for maintenance activities such as flushing hydrants to maintain compliance with regulations and quality parameters,” Benkovich said in the report. “Also, leaks and water main breaks tend to become more frequent occurrences as systems age.”

The same holds true for pipes located on private property, which is also more prone to leaks and losses before the water is metered.

Extreme weather events also contribute to the problem. Extreme cold weather is more likely to cause aging pipes to break. And in winter, many customers have to run their water to prevent freezing.

“Although much of that water is authorized a portion of it is unbilled,” the report said.

While programs to reduce loss – such as lining the inside of pipes to prevent leaks – help reduce the problem, only putting in new pipes will make a significant difference.

“Ultimately reinvestment in infrastructure renewal will be the key tool in making significant long term and sustained gains in loss control,” the report concludes.

*This story originally did not specify the measurement used.