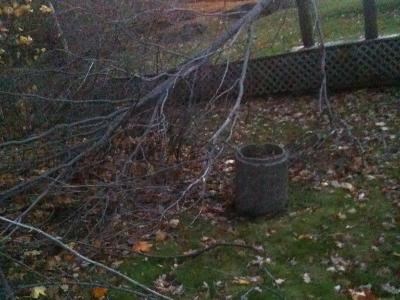 Gusting winds of up to 90 km/h are expected today as a low pressure system moves across the province. Overnight, several trees were downed, some knocking out power. Photo by Stacey Lavallie.

A massive low pressure system, which stretches from Saskatchewan to eastern Quebec and from Hudson's Bay to the mid-western United States, is bringing high winds, downed tree limbs and sporadic power outages to Greater Sudbury.

A massive low pressure system, dubbed a 'weather bomb' by Environment Canada, is moving across northern Ontario toward Quebec. The low is causing gusting winds and downing trees in the city this morning, Oct. 27.

"The storm is huge," Peter Kimbell, emergency preparedness meteorologist for Environment Canada, said. "Much of North America is being affected by this storm. It's covering millions of square kilometres."

Kimbell said the storm, which has prompted a high winds warning to be issued for the Greater Sudbury and Manitoulin areas, is fairly harmless despite its strength.

"For the most part, it was a lot of rain, a lot of wind, a few tornadoes," Kimbell noted. "The only place with any snow was in the prairies. (The storm) is comparable to a hurricane, (but) the impact is nowhere near as great as if it had happened in November or December."

The United States National Weather Service compared the storm to the one in 1975, which sank the Edmund Fitzgerald. There are gale warnings on all large bodies of water from Saskatchewan to the east coast at this time.

The weather warning issued for the city and area warns of sustained winds of about 60 km/h, with gusts up to 90 km/h. In some places on Manitoulin Island and in northwestern Ontario, winds have been reported as high as 100 km/h.

Kimbell said the storm is already starting to dissipate, and it is moving northeast toward James Bay. He said there will be several days of rain before the weather system moves on, starting this evening with showers.