'We're going to win this' says leader of anti-casino campaign 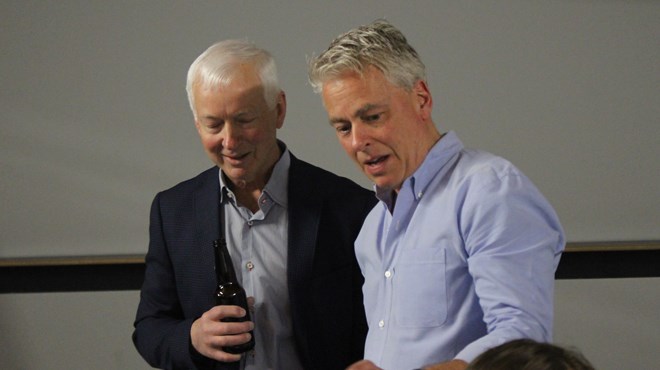 Proponents fighting the Kingsway Entertainment District gathered at the Caruso Club on Thursday evening for a $100-a-plate dinner aimed at raising funds to keep their legal fight going.

Tom Fortin, the businessman determined to stop the Gateway Casino that's part of the KED, put on the event. Fortin said that $344,000 in legal fees have already been paid to Gordon Petch, one of the top planning lawyers in Canada.

Fortin is part of a group fighting the rezoning and Official Plan changes needed for the $65-million casino, $100-million arena and a hotel and parking lot to be built on land owned by Dario Zulich.

The Local Planning Appeals Tribunal process to hear the case is currently in limbo following a November 2018 case management conference. The LPAT stopped the clock on the appeal process as it deals with motions on both sides in an attempt to decide what issues are valid and will be part of the hearing, whenever it is held.

Thursday's dinner was sold out, with 400 tickets priced at $100 a piece, at least $40,000 was raised – and that total is expected to climb as the evening featured a number of silent auction items up for bid.

"One thing was to raise a little bit of money for the effort because we've spent a lot of money on this," said Fortin. "The other was to give a chance to all the different proponents and groups and businesses that are involved in the campaign to meet each other and chat and get to know each other a little bit."

Fortin says the response from citizens and businesses fighting against the KED has been strong. With the support he's received, Fortin says he's certain they will be able to continue to raise money to fund their legal battle – and, eventually, win.

"We're going to win this, there's no question in my mind,” he said Thursday. “I asked the lawyer on Tuesday and he said of all the appeals he's seen involving a casino, this is the strongest one he's ever seen. We are absolutely going to win this I have no doubt about that."

Fortin's main sticking point with the KED is the proposed casino, and he has been fighting against the city's plans to add a new gambling establishment, launching the website casinofreesudbury.com in 2017.

Fortin admits he may be in the minority among those fighting the KED.

"I actually think there are more people opposed to the event centre being there than the casino being there," said Fortin.

"I'd probably say it's 75 per cent event centre, 25 per cent casino and I think that's because to understand the impact of a casino is not readily apparent. People look at a casino and the shiny lights and they equate them to wealth. But the truth is much different than that. With the event centre, it's more of a heart thing than a brain thing, where it's the cultural centre of our community and do we really want it out at that location? It should be downtown."

If the LPAT appeal is successful, Fortin says he would like to see the land on the Kingsway become an industrial park of some kind.

"That's what it's zoned for, that's what's in the Official Plan," he said.

In the event that appeal is unsuccessful, there are contingency plans in place from the side opposed to the Kingsway Entertainment District, though Fortin remains confident that it won't get to that point.

"There are other avenues that we can pursue, we hope it doesn't come to that because that's more money, but it's not going to get to that point," he said.

"Ultimately the main benefactor of this fight is going to be our community, this is a community-led and community-funded effort. The majority ($308,000 of $344,000 to date) is coming from businesses and of course there are some that have financial interests, but by far the majority of money is coming from people who don't have financial interests, they're acting purely out of concern for their community. You give to your community it gives back to you."