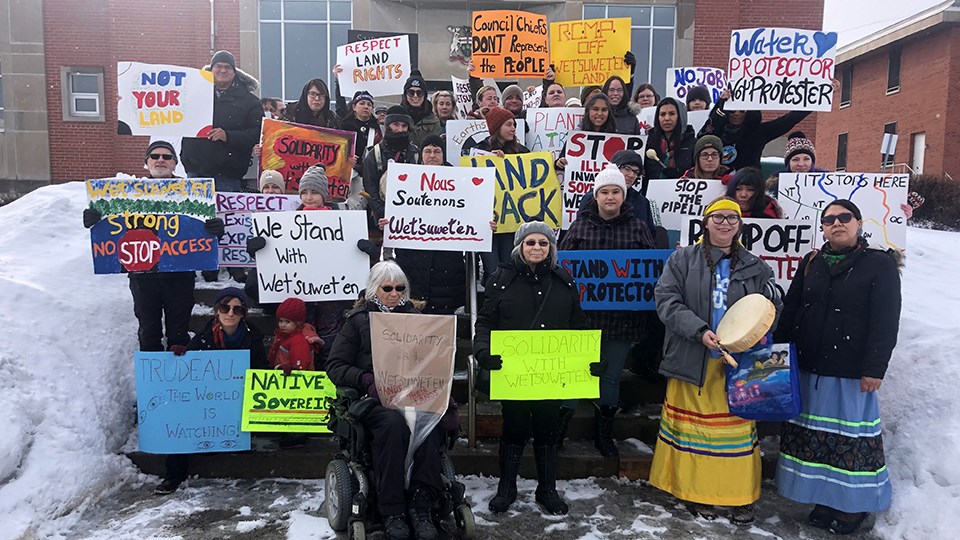 Around 100 community members gather in Downtown Sudbury on Sunday in an act of solidarity for Wet'suwet'en First Nation. (Keira Ferguson/ Sudbury.com)

Answering a call for solidarity, a few dozen Sudburians took to the streets Sunday to show their support for members of B.C. Indigenous community Wet'suwet'en First Nation fighting the Coastal Gaslink Pipeline project.

"Wet'suwet'en First Nation has asked for help, just like any nation whenever you're under attack - you ask for help," said Kahteraks Goodleaf, member of the rally's organizing committee.

Equating the pipeline project with colonization, Goodleaf said the people who marched on Sunday wanted to add their voices to those opposed to the gas pipeline and to encourage anyone unfamiliar with the project to get informed.

"This is just an example of what happens to Indigenous communities all the time, that colonization is still here," said Goodleaf. "It's still happening and people have had enough."

It is intended to transport natural gas from the Dawson Creek area to LNG Canada’s export terminal on the coast of Kitimat through 22,000 square kilometres of territory, a mix of reserve land and traditional territories. The pipeline would run directly beneath a major waterway, the Morice River.

The project is being contested by all five Wet’suwet’en hereditary chiefs, on the basis of their right to protect themselves and future generations from what they say is the “irreparable harm” the pipeline will cause.

But the band councils of all 20 First Nations in the territories the pipeline will cross support the project. All have signed community and benefit agreements with Coastal GasLink. The bands have said the project will not only create jobs for Indigenous people, but potentially act as a revenue source to invest in housing, health and education.

Twice, the B.C. Supreme Court has issued injunctions against the demonstrators, one Jan. 7, 2019 that forced the disbandment of a blockade at Gidmt’en camp and the arrest of 14 demontrators, and another on Dec. 31, 2019 that gave demonstrators three days to stop blocking forest roads to the site.

Two days before the latest injunction notice was posted, Wet’suwet’en hereditary chiefs issued the company an eviction notice. Coastal GasLink complied, but said their workers would return within weeks to begin clear-cutting and road building, and to prepare for the delivery of pipeline materials.

In 2019, British Columbia adopted the United Nations (UN) Declaration on the Rights of Indigenous People, which includes the right for Indigenous nations to give free, prior and informed consent on activities on their lands. It also gives Indigenous people the right to say no to projects on their territories.

This month, the UN Committee on the Elimination of Racial Discrimination called upon Canada to halt the construction of the Coastal GasLink pipeline until and only if, consent is given.

This included a plea to stop the forced eviction of land defenders, prohibit the use of lethal weapons, guarantee that no force will be used against Indigenous peoples and withdraw the RCMP from traditional lands.