What the heck's happening with the Ring of Fire?

The Ring of Fire may appear to be a garden of agony for the mining companies involved, but Ontario’s lead negotiator charged with working out a crucial and historic agreement with affected First Nations assures all that real progress is being made to
May 28, 2015 2:11 PM By: Northern Ontario Business Staff 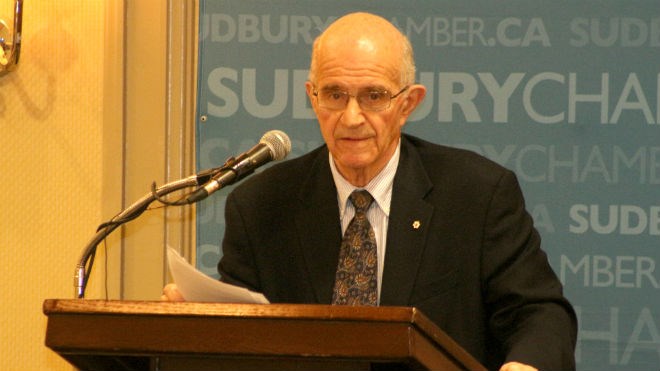 Frank Iacobucci, the former Supreme Court justice who's the province's lead negotiator on the Ring of Fire, says there is work going on to make the massive mineral development a reality, but wouldn't provide any details on where things stand now between the government, miners and First Nations. Photo by Jonathan Migneault

The Ring of Fire may appear to be a garden of agony for the mining companies involved, but Ontario’s lead negotiator charged with working out a crucial and historic agreement with affected First Nations assures all that real progress is being made to advance development in the Far North.

Former Supreme Court justice Frank Iacobucci talked at length before a Greater Sudbury Chamber of Commerce lunch crowd on May 26 about Canada’s evolving relationship with Aboriginal people in righting the wrongdoings of the past with a new partnership based on mutual respect.

But he didn’t reveal much about what progress has been made since a much ballyhooed regional framework agreement was signed by Premier Kathleen Wynne and the Matawa chiefs in 2014, except to confirm that a second round of negotiations is coming up.

“A lot of work has been going on. We don’t work in the public arena. We work behind the scenes.”

In July 2013, Iacobucci was appointed Ontario’s lead negotiator in discussions with the chiefs of the Matawa First Nations, a tribal council of communities closest to the mineral deposits in the James Bay lowlands. Matawa’s negotiator is former Ontario premier Bob Rae. He reports to Northern Development and Mines Minister Michael Gravelle.

They’re both tasked to dive into the details on environmental safeguards stemming from resource extraction, related industry and community infrastructure planning, social and economic investments, and most importantly, resource revenue sharing from mining activity.

'Work has been going on'

In an interview after his speech, Iacobucci wouldn’t divulge when that next round of negotiations will start, what’s on the agenda, or even if the government funding is in place to stage that series of meetings.

“Look, I am not able to go into details. I negotiate with Bob Rae and the chiefs and I work for the government of Ontario. All I can say is a lot of work has been going on, is going on, and funding issues are front and centre.”

Sitting in idle mode is Noront Resources, now the leading player in the Ring of Fire, since the departure of Cliffs Natural Resources from Ontario and Noront’s subsequent US $27.5-million purchase of the Cliffs chromite claims in March.

The Toronto junior miner has waited more than two years for the province to approve its terms of reference for the environmental assessment of its Eagle’s Nest nickel mine in order for the company to move on striking impact benefit agreements with three area communities, and then start mining.

Noront’s acquisition of the Cliffs claims and its proposal for an east-west road, starting near Pickle Lake, to access Eagle’s Nest appears to have split Matawa into two groups: those communities who support Noront’s corridor plan, and those who favour a north-south road/rail link starting near the Aroland First Nation and running past Marten Falls First Nation to the Ring of Fire claims.

Bull by the horns

Perhaps in frustration, Noront took the bull by the horns and issued an open letter to the Matawa chiefs on May 19 asking for their participation in “multi-party discussion forums” to address the environmental assessment, community impacts and benefit arrangements and partnership opportunities.

One forum will tackle Noront’s flagship project, Eagle’s Nest, while the second forum will address its backburner chromite properties, including those acquired from Cliffs.

Iacobucci supports the idea but gave no indication that he or Ontario plan to participate.

When asked when he’s doing to get Ottawa more involved in the framework process, and repair a testy relationship with Queen’s Park, Iacobucci responded, “That’s a good question,” and deferred to those in political channels.

“I’m not a politician. That’s the political level. This framework agreement envisions the federal participation.”

With miners like Noront working through their project development process and Ontario and First Nations working on theirs, Iacobucci concedes that eventually those two tracks must converge under a big tent development plan. But the timelines are unclear.

“Yes, they have to come together at some point. We’re working on it, that’s all I can say. We all are conscious of the time.”

Iacobucci said the framework agreement focuses on working out an arrangement that recognizes First Nations’ deep respect for the environment, culture and tradition, while also being cognizant of the project economics and return on investment to shareholders.

“It’s not as though one trumps the other,” he said. “That’s what deal-making is about.”

Historically, he said there has been a level of mistrust by First Nations against government and industry, “but there is a “genuine effort” being made by many stakeholders intent on changing that perception.

“Whether we succeed depends on a lot of factors. But it does depend on our making the effort to understand their background and understand their history and move away from that history by actually saying, ‘Yes, you will participate in this, and we’ll be sharing with you in some way.’”