What would OHL's return to play look like? Would American teams be based in Ontario?

'Our league has so many questions and it's all up to the government. Are we going to have contact? Will we be allowed to travel across the border? Those are government answers, not league,' says one GM
Nov 30, 2020 8:00 PM By: Gene Pereira 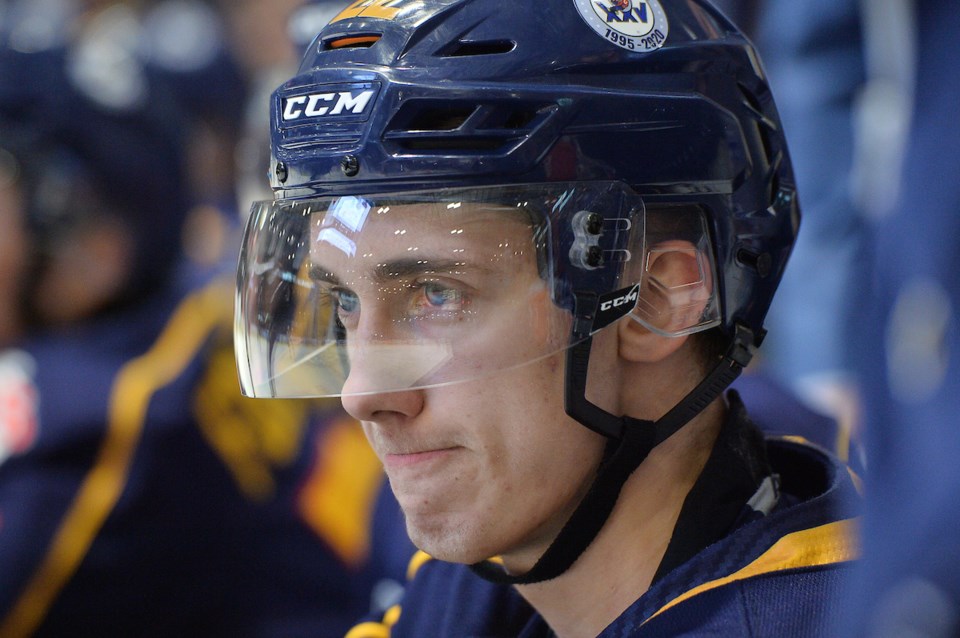 OHL clubs are set to do what they can to have an OHL season and allow players like Barrie Colts overage captain Luke Bignell to finish out their junior hockey careers on the ice. Terry Wilson/OHL Images

As much as Ontario Hockey League team owners, coaches, players and junior hockey fans in this province want the puck to drop Feb. 4 for the start of the shortened 40-game regular schedule, the decision is out of their hands.

The only ones who will determine whether there's a return to action or not are the province and the COVID-19 virus itself.

"The virus and the government will determine whether there is a season or not," one OHL general manger told BarrieToday. "If we're in bad shape in the middle of January, they're not going to let us have training camps. You stay positive right now, but it's going to be handled in January and where the state of the virus is."

The OHL has already had to push the start of the regular season back twice, first moving their regular late-September start date to Dec. 1 and then to February. Unfortunately, a second wave has pandemic numbers on the rise and the truth is no one knows for certain just where we'll be come mid-January when training camps are set to open.

The recent news of three effective vaccines are exciting, but those likely won't be delivered to the public until early next year at the earliest. Still, representatives of the OHL teams we talked to remain optimistic there'll be hockey.

"Yeah, it's going to be tough, but we're keeping it very positive that we're going to be playing in February," one GM said. "Yeah, we might have a smaller division and yeah we might play less games and just certain teams. It could be a whole different year, but you know the bottom line is our players are getting ready, the rest of our organization is getting ready for having our guys come in. Until they tell us it can't be done, or the date has to be moved again, until then we're pretty positive that February is the go date.

"There's some aspect that fingers are crossed, that's for sure," the GM added. "I think you got to have that kind of attitude. I don't think it's time to be pessimistic; you just hope that people keep doing the right things. That's the main message to the players on the phone: Just be safe. Stay in your bubble, stay with your family, make sure everybody's good."

Just what the exact plan will be has been an ongoing conversation between the league and the province. Several hurdles remain, including foremost the need for provincial cases to come down from their current record infection levels.

Which means doing our part by wearing masks, washing our hands and, of course, maintaining our social distance.

Another big obstacle to be cleared will be finding a way to ensure a season is economically viable for OHL clubs. One thing is certain: that it would be very difficult for the OHL to play without fans in the stands unless the province provides help similar to the way the Quebec government did when they gave the Quebec Major Junior Hockey League (QMJHL) $20 million to cover costs and allow teams to play without fans in the building.

Even if 1,500 fans were allowed, would they show up in the middle of a pandemic without a vaccine? Most people, including most of the older fans who attend games, don't want to socialize now with COVID.

"That's the easiest way, is to start with no fans," one GM said.

A real argument can be made that this is worth doing and the province should provide some financial help. The OHL and their respective teams are no different than any other businesses, and the province and federal governments have already provided aid across the country. Teams may still lose money, but financial help will certainly soften the blow.

Another big question that remains is what to do with the OHL's three American-based teams. An answer to that will have to come from the province and federal governments. It's more than likely that teams will not be allowed to cross back and forth across the border. The Toronto Raptors recently announced they will be playing all their home games in Tampa Bay, Fla.

Some discussions have centred around looking at a way to cross over and play games and then return back with no dinner stops or other planned stops along the way. Simply cross over, head straight to the rink and then back. That, of course, would require government approval.

As would bringing the three American teams over and have them play all their games in Ontario. The teams could call cities like Chatham or Niagara their home, or possibly double up in current OHL cities like Windsor or possibly in Sault Ste. Marie, which could help solve what division or bubble to place the northern team in. If no fans are allowed in the seats, at least to start, does it really matter where the three American teams call home for the shortened season?

"Our league has so many questions and it's all up to the government," one GM said. "Are we going to have contact? Will we be allowed to travel across the border? Those are government answers, not league."

The OHL seems committed to getting its players a season and that means adapting to whatever will allow them to get on the ice and play, but, of course, it must be done as safely as possible.

"Although we are eager to get back on the ice, the safety and well-being of our players, staff, officials, tremendous fans and communities remains paramount," OHL commissioner David Branch said in a statement in late-October.

Could the schedule be pushed back again? That's a possibility, I was told. The schedule shortened again? Everything's a possibility and is on the table to ensure the players get an opportunity to play. The start of last year's pandemic robbed overagers such as Barrie's Aidan Brown, Josh Nelson and Christopher Cameron of a final playoff run. Having to cancel this season and ending the junior careers of Colts captain Luke Bignell and Victor Hadfield would be a shame.

Which is why team officials are determined to do whatever they can to get the players back on the ice.

If that means big changes to the normal ways they do things, then so be it. While eliminating fighting is fine, the idea of no contact would likely be a back-breaker. Several OHL team officials have said they don't see the league playing if that's the case.

Full shields with masks and even spit guards could be required and are already being sported by players in some of the leagues currently playing.

Realignment of divisions is more than likely with teams grouped together based on their proximity to one another. The NHL has discussed having an all-Canadian division with three other divisions comprised of American teams close to one another.

That should be the case in the OHL and it's likely once the league knows what it can do with its three American teams it will draw up divisions that will see teams play within the division. It just makes sense to keep the bubble as tight as possible and limit travel as best they can.

The bubble will likely extend to the players and schooling. While some teams have players learn at the Blyth Academy, others could require all players do their classes online. The chances of getting the league up and running and keeping it going and preventing outbreaks increases with the idea of limiting player travel.

Much will have to be done and will be required of teams and players to have OHL hockey this season. Without that commitment, there's a good chance this could be a lost year.

"We're going to do everything to avoid that," a team official said.

About the Author: Gene Pereira

An award-winning journalist, Gene is former sports editor of the Barrie Examiner and his byline has appeared in several newspapers. He is also the longtime colour analyst of the OHL Barrie Colts on Rogers TV
Read more