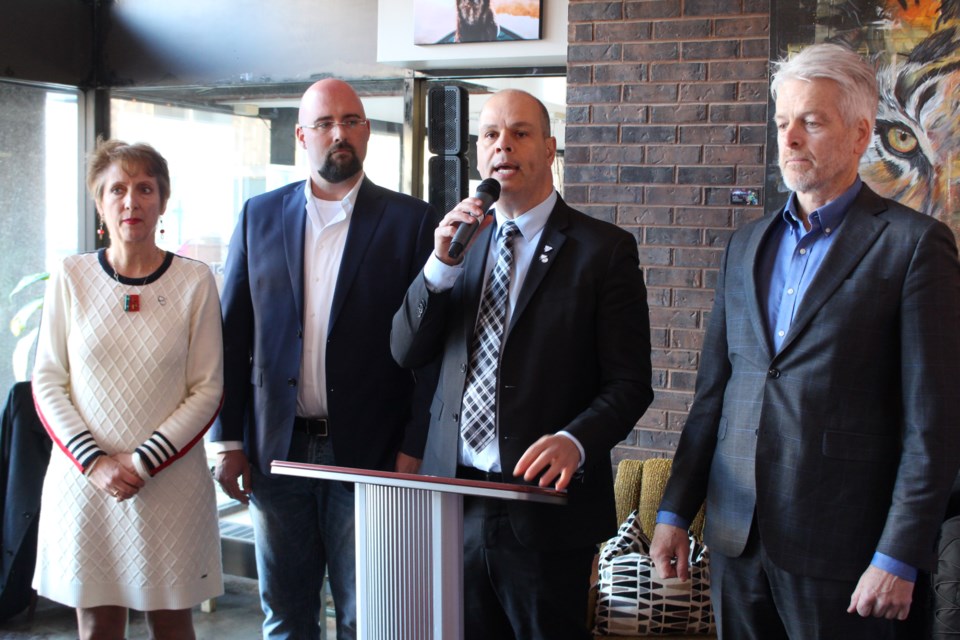 A recent wave of online harassment of members of Sudbury's LGBTQ+ community has left individuals fearful of going out in public and feeling as though their cries for help are not being heard.

That was the message that was delivered at a press conference Jan. 29 at a downtown Sudbury coffee shop. Sudbury MPP Jamie West and Nickel Belt MPP France Gélinas hosted the press conference and were joined by fellow MPPs Chris Glover (Spadina-Fort York) and Terence Kernaghan (London North Centre) at Kuppajo in the city's downtown where they stood firmly with the city's LGBTQ+ community while condemning those who have been espousing hate online.

Outspoken members of the city's LGBTQ+ community say they've been targeted online by what they described as a local white supremacist group. No details were provided about this group.

Kernaghan is NDP critic for LGBTQ+ issues and opened the press conference by stating that everyone deserves to be free from discrimination and harassment and that a person's gender identity should never be up for question.

The MPP read a statement that was written by a member of the LGBTQ+ community who has been a victim of online harassment.

"I've been involved with the 2SLGBTQ for almost 15 years, I've had to face my fair share of discrimination and hate, much like other members of the community and other marginalized groups," said Kernaghan, reading from the statement.

"However, over the past month my friends and I have faced increased harassment from a local white supremacist group at a level that we haven't seen in a while. These individuals have resorted to personal attacks, singling out the most politically active and vulnerable among us. They have targeted people through Facebook, Twitter, blog posts and YouTube videos. They have put up posts that include my photo, my workplace, vulgar names, homophobic slurs and vaguely worded threats, some of these threats extend to my friends and family."

Some tears were shed by those in attendance as Kernaghan read the statement, as the crowd of roughly two dozen huddled together inside of the downtown coffee shop to listen to the words of support from their local MPPs.

France Gélinas spoke with a hint of disappointment in her voice, saying the online harassment had reached a point where members of the LGBTQ+ community were left with nowhere to turn.

"I'm counting on each and every one of us to rise up to the occasion and show who Sudbury really is. We are a community who cares for one another and looks out for one another and who supports one another, this is who we are. We're Sudburians, we're northerners and we care for each other."

While Kuppajo was packed to the walls with LGBTQ+ community members, supporters, friends and allies, along with four MPPs, absent was any representation from the Greater Sudbury Police Service.

One member of the LGBTQ+ community who attended Wednesday's presser who says she is one of the victims of the online harassment, vented some of her frustration over a lack of action from the city's police force.

"We've all been to the police multiple times, they have gone to talk to these people to tell them to cut it out, but it's the internet, nobody has an IP address, so (the police) are not doing an investigation, although we've told them the profiles that are doing this," said the person who wished to remain anonymous over fear that they would be targeted further.

"We're not even retaliating because we're being told by police not to engage these people online. If we comment on any of their slanderous posts, then we've engaged and police can't do anything. So we're all hiding in the shadows while they're posting all their hatred and we can't do anything because then police won't take it seriously, but they're not taking it seriously anyways. It's so frustrating."

The timing of the press conference was somewhat serendipitous, as the NDP critic for LGBTQ+ issues was in town on other business, but also that it fell on Bell #LetsTalk day, a movement that deals with mental health.

"We knew that today was Bell #LetsTalk, and what better opportunity to talk about safe mental health," said Gélinas. "Hatred is devastating on people's mental health and this is what those people are experiencing right now. This is not who we are, we are a caring and accepting community, and when people in our community don't feel safe to go to work or to the grocery store this has gone too far, there's no place for hatred in our community and we're sending that message out, and what better day than today so let's all help one another to be healthy."

Sudbury MPP Jamie West says that he's aware the police have been contacted by members of the LGBTQ community but his party has not reached out to the GSPS on this issue.

"When I spoke to different individuals who have been harassed they discussed having a press conference, but they were also worried about having their photos taken and being identified at something like this," said West.

"We've all been in a situation where we've been in an argument with someone online and you write stuff you don't want to or someone hurts your feelings, but this is beyond that; people don't feel safe leaving their house or feel safe going to work, all these places where you should feel safe in the city. It's really got to a place where people feel afraid and we wouldn't accept that for anyone in our community."