Why is Sudbury, the North's biggest city, still without an indoor facility, coach wants to know

Soccer supporters hope you can help spread the message by signing their Change.org petition
Feb 27, 2018 5:00 PM By: Matt Durnan 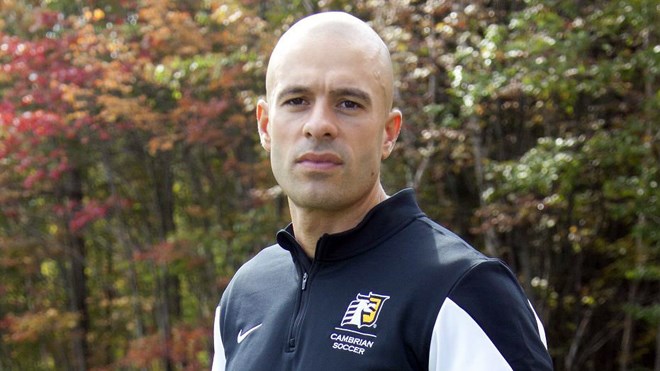 Sudbury's soccer players are at a distinct disadvantage compared to many urban centres around the province, as the Nickel City remains void of a legitimate indoor soccer centre. (File)

Sudbury's soccer players are at a distinct disadvantage compared to many urban centres around the province, as the Nickel City remains void of a legitimate indoor soccer centre.

It's been nearly two years since the Exhibition Centre on Falconbridge Road closed its doors in May of 2016, leaving local soccer organizers scrambling to find places for the city's young soccer players to get field time.

Calling it "field time" may be a bit of a stretch, as Sudbury is without an indoor turf facility, and indoor soccer programs are being run on gymnasium floors, which is stunting the growth of the sport and its players, according to Greater Sudbury Soccer Club head coach Giuseppe Politi.

"I have parents telling me that they want to put their kids in soccer, but why would these kids want to go play in a gym at a school?" said Politi. "Our kids aren't going to develop at the same rate as kids in other major urban zones who have access to indoor facilities with turf."

The Fabio Belli Foundation has created a petition on Change.org pushing for support of an indoor multi-sports facility. The foundation was created in honour of Fabio Belli, a former city councillor who was a champion of local sports, and soccer in particular. He passed away due to a heart attack in 2014.

Politi recently penned a letter about the city's need for an indoor sports complex and feels that there is no Fabio Belli-type personality on Greater Sudbury's current council, and local athletes are suffering because of it.

"Council doesn't seem to have a clear vision for young athletes in the city," said Politi. "They're talking about building a new arena, a new library and art gallery, but I don't hear any talk about an indoor sports facility."

Soccer in Greater Sudbury may have hit a tipping point recently, according to Dayna Corelli, who is involved with the sport at a number of levels, including running the girls' development program which attracted 125 participants last March.

"Right now the program is at risk of not being run because we just don't have a spot at the moment," said Corelli. "We're looking into the gyms at Laurentian and Northeastern Elementary (Garson). If we had a complex it wouldn't be an issue, we'd be able to block off a week to run these types of things. When it comes to user consideration at these places though, soccer isn't even on the radar, we're at the bottom of the priority list."

The Sudbury Regional Soccer Association has roughly 4,000 players registered, and Corelli said that numbers are starting to dwindle. At the grassroots level it's been a struggle, and the lack of a facility is going to be felt at the higher levels of soccer, including college athletics.

The Cambrian Golden Shield women's soccer team enjoyed some tremendous success of late, as the girls won bronze at the OCAA championships two years ago and were chosen as the hosts for last year's championship.

That may be the high point for a while though, said Corelli, who coaches at Cambrian.

"We kind of had to pull from all of our resources with the team as far as getting girls in their last year of eligibility and bringing them in," said Corelli. "There's not a lot coming through the pipeline locally though and we're seeing it already, the next year or two are going to be tough."

The building blocks for having a strong base of youth soccer talent starts with having the resources available, and Sudbury is dragging behind in the respect, Politi said.

"You look at Sault Ste. Marie, a city with 75,000 people, and they have an indoor facility with two turf fields. North Bay has 50,000 people and I'm hearing that they're getting their own facility this fall," said Politi. "How is it that Sudbury, a city with more than double the population of both of those places, doesn't have one?"

Additionally, there is an indoor tennis facility that runs year-round at Queen's Athletic Fields, for a user base of roughly 250 people.

In terms of what an indoor athletics facility would look like in Sudbury, Politi said that's still up for debate, but he would at least like to see the debate on the table.

"There's arguments for either a bubble dome or a permanent, hard-cover building," said Politi. "With our winters up here there's some risks of damage to a dome. With the hard cover you run into the issue of what do you do with it during the summer months?"

Building a permanent structure would cost roughly $5 million, while a bubble would cost around $3 million.

Film productions will impact traffic in a couple locations this week
Oct 29, 2020 10:15 AM
Comments
We welcome your feedback and encourage you to share your thoughts. We ask that you be respectful of others and their points of view, refrain from personal attacks and stay on topic. To learn about our commenting policies and how we moderate, please read our Community Guidelines.