Winning the battle with leukemia

Mitchell Jones celebrated a big milestone July 31 – his seventh birthday. It wasn't so long ago the Sudbury boy's parents feared he might never blow out the candles on another birthday cake.
Aug 2, 2013 4:58 PM By: Heidi Ulrichsen 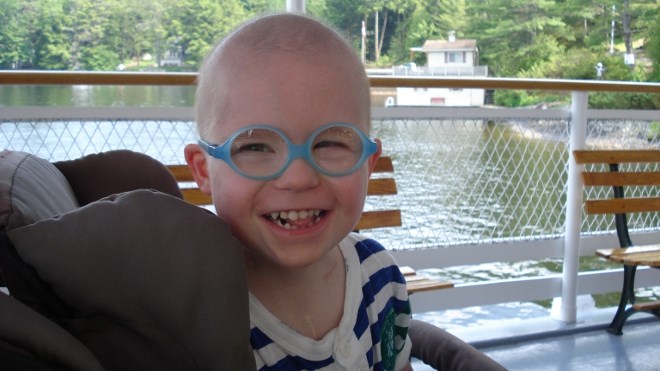 Mitchell Jones, who has fought leukemia for the past 11 months, turned seven years old July 31. He was discharged from the Children's Hospital of Eastern Ontario in Ottawa in May. Supplied photo.

It wasn't so long ago the Sudbury boy's parents feared he might never blow out the candles on another birthday cake.

Mitchell, known affectionately as “Mighty Mitch,” has fought leukemia for the past 11 months.

“We came so close to losing the little fella that it makes you sit back and take stock,” said Mitchell's father, B.J. Jones.

He said they celebrated the day with a big family party.

“He's got a mass of cousins around, so already he's in a kind of maelstrom of cousin activity,” Jones said. “There's kids flying around, blowing up balloons, and designing posters. It's complete mayhem here.”

The little boy's family, including B.J., his mom, Joanne Dagg, and older brother Jack, only moved to Sudbury from Ireland a year ago.

They made the move because Dagg had been born and raised in Sudbury, and she and her husband figured Mitchell, who has Down Syndrome, would be able to receive better government-funded services here.

But just two months after the family arrived in Canada, Mitchell was diagnosed with leukemia, and sent for emergency treatment at the Children's Hospital of Eastern Ontario (CHEO) in Ottawa.

As Mitchell battled for his life, Joanne stayed by his side. Jones and Jack travelled from Sudbury to Ottawa to visit as often as they could, and the family was able to stay at Ronald McDonald House while they were in Ottawa.

Mitchell was discharged from CHEO in May, and is now on maintenance chemotherapy. He receives weekly checkups at the Northeast Cancer Centre, and the family still has to travel to CHEO for tests every month.

“The real awfulness of that nine months, that I wouldn't wish on anybody's child, is, we hope, pretty much gone now, unless there's some godawful disaster and he goes into relapse,” Jones said.

“In that case the whole procedure starts all over again ... It's looking extremely good, his blood counts are good, he's rosy-cheeked and he's in fine form.”

He said he's enjoying seeing his son, whose hair is now growing back after he lost it due to chemotherapy treatments, doing “normal little boy things” again, and not being stuck in a hospital bed all the time.

Jones said both Mitchell and Jack are due to attend MacLeod Public School in the fall.

“Life can start looking vaguely normal for everybody,” he said.

Jones said he wants to thank the Sudbury community, as well as his friends and family back home in Ireland, who fundraised to help the family, which suffered financial hardship because of his son Mitchell's illness.

“Really, it's been an amazing ride. We wouldn't have been able to see our way through it as easily without the support of the people in Sudbury and back in Ireland as well.”