Dan de Chevigny stuck in Sudbury as his wife, newborn son and step children wait for him in Russia
Mar 23, 2020 10:00 AM By: Arron Pickard 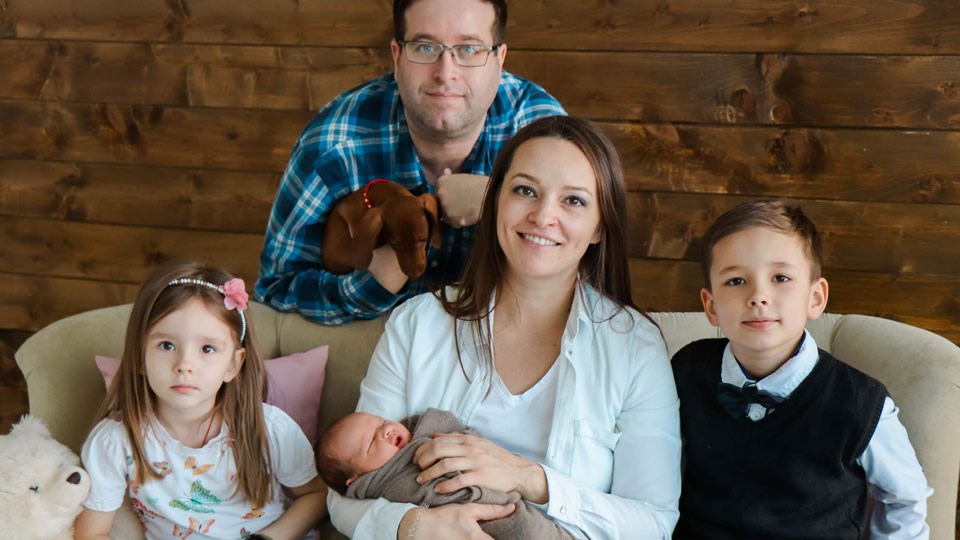 Dan de Chevigny and his family after the birth of their son, Adrian. In front is Kira, Evgenya, Adrian and Pavel. In back is de Chevigny and their dog, Ketchup. (Supplied)

While most Canadians are trying to get back into the country, Dan de Chevigny wants nothing more than to leave it.

That's because de Chevigny, who lived in Sudbury before moving halfway around the world, has a wife, a newborn son and two stepchildren living in Tyumen, Russia.

His son, Adrian, was born Feb. 25. De Chevigny returned to Ontario on March 10 because his visa expired. He had to come back to apply his new work visa to his passport. He's been self-isolating since he arrived.

Staying away from other people isn't posing a problem, though.

“I used to self-isolate before it was cool, so it doesn't bother me. Although I would like to be able to do my own shopping,” de Chevigny said.

He was supposed to return to Tyumen March 27, but that was before Russia announced March 16 it is restricting border crossings to foreigners effective March 18 and lasting through May 1 to help stem the coronavirus outbreak.

There's a nine-hour time difference between Tyumen and Ontario, further exacerbating an already difficult situation for de Chevigny and his family. They keep in touch via video messaging, and every time it weighs heavier on his heart.

“The hardest part is not being there to help my wife,” de Chevigny said. “I can hear the exhaustion in her voice every time we speak. I wish I could be there to help her with the kids and hold my baby boy.

"Although it's difficult to be away from my loved ones, I fully understand the necessity. It only makes sense for everyone to take whatever precautions they can to help. We need to care about one another right now."

He met his wife, Evgenya, at a summer camp in Franfort, Michigan, in 2001.

"We had a wonderful relationship, but life events separated us," de Chevigny said. "Our feelings for each other never went away, and 18 years later we were finally married."

He also has a 13-year-old daughter who lives in North Bay. He likely won't get to see her while he's here, because of the measures in place to prevent the spread of coronavirus.

Moscow has now banned all outdoor events and limited indoor gatherings to fewer than 50 people, and older Russians have been told to remain inside.

Schools are now shut, attractions such as Lenin's tomb and the Bolshoi Theatre are closed and the government has announced a sizable bailout package for businesses at risk.

Public Health Sudbury announces area's 114th confirmed COVID-19 case
Oct 21, 2020 7:10 PM
Comments
We welcome your feedback and encourage you to share your thoughts. We ask that you be respectful of others and their points of view, refrain from personal attacks and stay on topic. To learn about our commenting policies and how we moderate, please read our Community Guidelines.