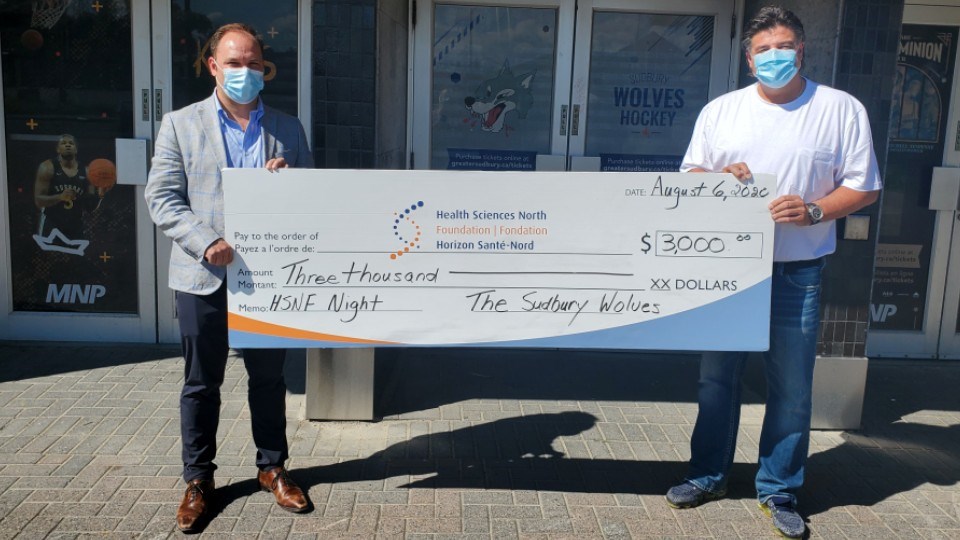 The Sudbury Wolves announced Wednesday that last season’s Health Sciences North Foundation game, which took place on Jan. 10 in support of the MRI Campaign, raised $3,000 for the initiative.

The money was raised from the silent and online auctions of the Wolves’ physician-themed jerseys as well as through t-shirt sales and ticket sales at the hospital.

“Last season we had the pleasure of working closely with the Health Sciences North Foundation on this special charity game and were able to help shine a light on a campaign that is going to benefit so many different people in Northeastern Ontario,” said Miranda Swain-Boivin, SWSE marketing manager.

Anthony Keating, president and chief development officer, foundations and volunteer groups at HSN, expressed his gratitude for the donation in a press release.

“We are thankful to the Sudbury Wolves for hosting the Physician Themed Jersey Day in support of Health Sciences North Foundation,” Keating said.

“It is inspiring to watch our community come together to support priority health care needs for people across northeastern Ontario. The themed jerseys were a fun addition to an exciting hockey game.”

The physician-themed jerseys are one of four special themed jerseys that were planned for last season,with the Wolves also donning Superhero themed jerseys in November and Sudbury Five crossover jerseys in February. Unfortunately, the St. Patrick’s Day jersey game was put on hold due to the cancellation of the end of the season.

The Sudbury Wolves thanked all of the fans that supported these events as well as all the frontline health care workers for their tremendous efforts in fighting COVID-19.

The OHL’s 2020-21 season is expected to get underway this December as the Wolves look to defend their Central Division championship, with more details to be released in the coming weeks and months as discussions with public health and the provincial and federal governments continue.

For more information on the OHL’s Return-to-Play plan click here.