A 22-year-old woman has died in a mining accident underground at St. Andrew Goldfieds' Holt Mine near Black River-Matheson in northeastern Ontario.
May 25, 2015 2:23 PM By: Sudbury.com Staff 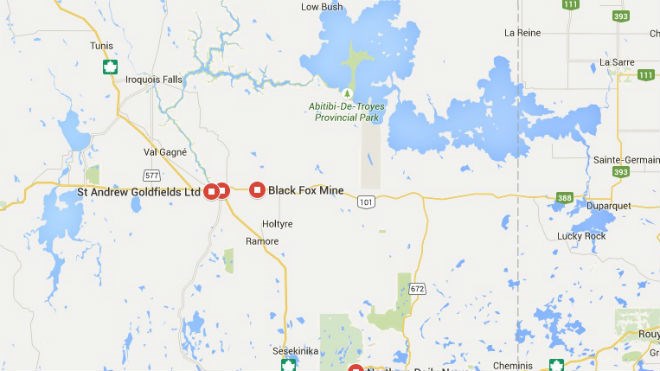 In a press release, the company said Alexie Dallaire-Vincent, 22, was involved in an underground rail haulage accident, that resulted in her death on May 23.

The mine is located 125 kilometres east of Timmins.

St. Andrew Goldfieds stated in the release that the Ontario Provincial Police attended the scene and are conducting an investigation into the death in conjunction with the Ontario Ministry of Labour and the company.

"We are deeply saddened by this news and our sincere condolences go out to the family, fellow workers, and friends", said Duncan Middlemiss, company president and CEO. "SAS is co-operating with the ongoing investigation, as well as providing support to family and employees at the mine site. SAS is committed to the well-being of our employees and contractors on all of our sites.

"A safe workplace is the fundamental principle of the Company, and this tragedy has strengthened our resolve in this pursuit."

According to media reports, Dallaire-Vincent was injured around the 900-foot level of the mine. Following the incident, she was brought to surface and taken to Bingham Memorial Hospital in Matheson.

Her death comes less than a year after another death at the Holt Mine. Contract worker Michel Fournier Bolduc, 26, of Rouyn-Noranda, died June 25, 2014 while working at the surface. Bolduc was working for Orbit Garant Drilling when he was struck by a falling tree. He died as a result.