'Worst' road Lorne Street will get a facelift this summer

On the day it was nominated as one of the worst roads in Ontario, members of the public got a close up look at what the city plans to do this summer to improve Lorne Street.
Apr 7, 2016 1:00 PM By: Darren MacDonald 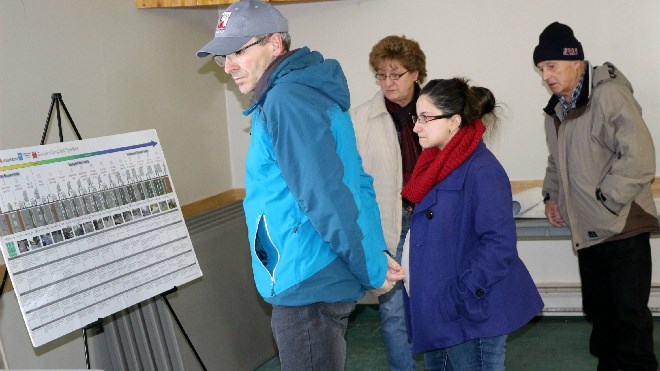 On the day it was nominated as one of the worst roads in Ontario, members of the public got a close up look at what the city plans to do this summer to improve Lorne Street.

About $5.5 million in work is being proposed for 2016, including road and drainage work from Logan to Martindale Road, as well as parts of Gutcher Avenue.

As of March 6, Lorne Street was ranked the second worst road in the province, just behind Carling Avenue in Ottawa, in the Canadian Automobile Association's (CAA) annual worst roads competition.

A steady stream of residents viewed the detailed plans Wednesday to change that ranking, at a public meeting held at Delki Dozzi. Giulia Carpenter, who lives in Gatchell, said she wanted to find out whether the work will make it easier for her family to go for walks.

"I just wanted to see what the updates are and figure out whether there's going to be biking and beautification of Lorne,” Carpenter said. "We always walk down Lorne with our family, so I'd like to have a little bit of separation. If there's a bike lane and then the walking area, so it's separated from the cars, you'd feel a little safer.

"And we know a lot of people who take their bikes and they're terrified of going down Lorne Street."

The project includes a bike lane on both sides of Lorne, with a sidewalk running along the north side.

David Kalviainen, a roads engineer with the city, said the work underground will extend beyond work on the surface.

"We're replacing about 85 per cent of the storm sewer, putting a new sub-drain in underneath the existing curb,” Kalviainen said. “So that should address quite a bit of the drainage problems that people are seeing.

"We'll also re-instate the sidewalk with a proper grade that flows back towards the road, rather than in some areas where the drainage is going down toward the properties. So that should help a lot."

That's music to the ears of Kathy Pisani, who owns a business on the road — Fresh Image. Pisani said she was at the meeting to find out if the improvements will help with a chronic issue.

"The drainage in front is not working properly — all the water keeps coming into my business, into my driveway,” Pisani said. “I'm hoping new piping will make it so (water) doesn't come into my driveway ... So it was a good idea to come and see what they are going to do about it, see if they can fix any of that."

While her business could suffer during the construction period — which runs until fall 2017 — Pisani said the poor state of the road already hurts businesses in the area.

"As Lorne Street is right now, it's bad,” she said. “Hopefully this makes it better for us in the long run. I know it will take a bit of time, but it will be better for our future, right?

"It will make it more attractive, easier access, because right now it's hard to even get into places with all the potholes people are trying to avoid. In the long run, it's worth it."

Ward 1 Coun. Mark Signoretti, whose ward includes Lorne, said he's heard nothing but praise from businesses in the area, who are glad the pock-marked street is finally getting a facelift.

"So far I've talked to a few of them, and it's been all positive responses,” Signoretti said. “You know what? Construction is something that's going to happen. It may affect their businesses for a short time, but ... we're fixing infrastructure, fixing underneath the infrastructure — roads and the piping system — and getting that cleaned up to beautify Lorne Street. And it will bring up the value of their properties.

"People are excited that it's finally here. We just need to get going with it and make it happen."

While there was talk of using debt-financing to rehab even more of Lorne, Signoretti said that's still in the early stages.

"I know we're trying to get different levels of government to participate in doing a bigger section of it,” he said. “The debt financing aspect, that was just more for information just to see how it all works, so everyone understands the pros and cons and how it all works out. But right now, none of that has been brought to the table."

For her part, Carpenter said she'd like to see how well the current project fares before deciding whether debt-financing is a good idea.

"I'd like them to start with the one area and see how things go,” she said. “But if it brings more business to the businesses that are on Lorne Street, then at that point I would say definitely extend it down towards downtown."