Roger Brisson said he admires Xstrata Nickel officials for being so upfront with residents about how the company’s operations impact on their lives.
0
Oct 19, 2011 6:01 PM By: Heidi Ulrichsen 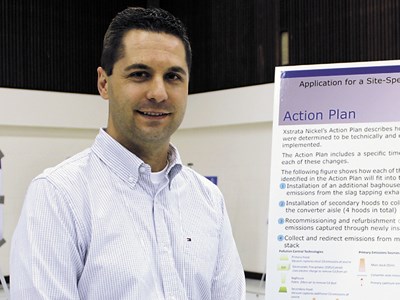 Chad Pearson, superintendent of the environment at Xstrata Nickel’s Falconbridge smelter, shows off the company’s action plan to reduce cadmium emissions at the smelter to Ministry of the Environment standards by 2018. Photo by Heidi Ulrichsen.
Roger Brisson said he admires Xstrata Nickel officials for being so upfront with residents about how the company’s operations impact on their lives.

“They say ‘There are problems, but here’s what we do about it’,” Brisson, who has lived in Falconbridge, close to Xstrata Nickel’s operations, for 10 years, said.

Brisson was one of a handful of residents at an Oct. 17 open house that focused on Xstrata Nickel’s application to the Ministry of the Environment to have more time to meet new, stringent standards for cadmium emitted from their smelter in Falconbridge.

Posters explaining the issue were set up in the gym at the Falconbridge Community Centre, and Xstrata Nickel personnel were on hand to chat with residents.

“I just want to see what they’re doing on the cadmium aspect of the emissions,” Brisson said. “I’m a resident here, and the residual effect will fall on the village. As far as health matters, we’re always interested in that.”

The current cadmium emissions standard is 0.25 micrograms per cubic metre on a 24-hour average. Xstrata Nickel is in full compliance with this standard, according to Chad Pearson, superintendent of the environment at Xstrata Nickel’s Falconbridge smelter.

The new standard, being introduced in 2013, is 0.025 micrograms per cubic metre on a 24-hour average. Xstrata Nickel is already in compliance with this standard 90 per cent of the time, he said.

However, because it’s going to take “millions” of dollars in technology to get to 100-per-cent compliance, the company has asked the ministry for a “site-specific standard” for cadmium until 2018 so they can work towards meeting the new limit.

Xstrata Nickel would have to submit an “action plan” to the ministry before this site-specific standard would be approved.

Much of the technology being installed will help not only to reduce cadmium emissions, but also with sulphur dioxide and nickel emissions, he said.

“One of the main areas (cadmium) comes from is our slag tapping process,” Pearson said.

“One of the things we did in 2010 is we installed a bag house — an air-capture collection system — which captures a lot of the cadmium from that process.

Nicholas Ting, a Toronto-based pollution control engineer with the Ministry of the Environment, also attended the open house.

He said it’s better to work with companies than to draw a line in the sand.
“In this site-specific process, we want them to have an action plan. You have to tell the ministry how you are going to meet the standard,” he said.

To give input or to receive further information, dial 705-693-2761, ext. 3989 or email sudburycommunity@xstratanickel.ca.