2020 presented many challenges for city council

In addition to dollars and cents, the pandemic brought Sudbury’s socio-economic issued to the forefront
Dec 31, 2020 1:00 PM By: Matt Durnan 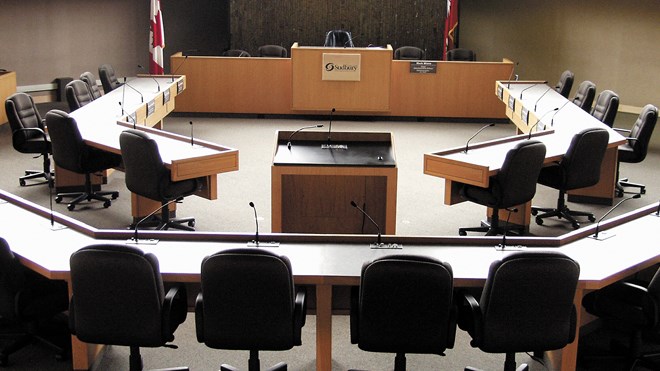 Mayor Brian Bigger and city council had their hands full in 2020, navigating their way through a pandemic that presented many financial challenges and brought socio-economic issues to the forefront.

Mayor Brian Bigger and city council had their hands full in 2020, navigating their way through a pandemic that presented many financial challenges and brought socio-economic issues to the forefront.

During the summer months, city council and staff battled with huge financial losses due to lost transit revenues and user fees.

By July, the city was staring down the barrel of a projected $10 million in costs and lost revenues due to their COVID-19 response.

Reduced ridership on the city’s GOVA Transit system, coupled with modified transit schedules was hitting the city hard, resulting in a monthly impact of $615,000 in lost revenue and an estimated total loss of $2.3 million between March and the end of July.

Many of the city’s leisure services were shut down due to COVID-19, resulting in a projected loss of $2.7 million between March and July, with $730,700 in losses in July alone.

In June, the city was projecting a year-end deficit of $14 million, but a lifeline was thrown in August in the form of the province’s Safe Restart Funding in the amount of $12.7 million.

While the funds shifted the 2020 financial outlook greatly, moving the city into the green with a projected $3.9-million surplus, budget planning for 2021 has been a tenuous process, as there are a multitude of unknowns.

Without a guarantee on provincial and/or federal funding, or a crystal ball to determine how long COVID-19 will impact city services, the city must cover a $14-million shortfall in order to achieve a balanced budget next year.

Number crunching that includes the potential for cuts to services and increases to user fees will all be at the forefront of discussions at the council table as staff and councillors work together to develop the 2021 budget.

While budget talks take place in boardrooms and in offices, the city has also been battling with a very visible issue in its downtown.

Homelessness and the mayor’s task team:

Eight months into the pandemic, an alarming reality began to come into view as issues that have plagued the downtown in the past hit a tipping point in October.

A pair of violent incidents in the span of one week, including a fatal stabbing on Elm Street on Oct. 14, pushed Greater Sudbury Mayor Brian Bigger to establish a task team to address the issues facing the downtown.

Bigger stated during a press conference announcing the task team that the situation in the downtown would get worse if significant action was not taken.

Included in the planned actions for the downtown are increased security, increased needle and garbage pickup and increased presence of city representatives.

Since the creation of the task team, the city has expanded the hours of its overnight warming shelters to provide a safe and warm space for the city’s most vulnerable citizens to sleep, seven nights a week.

Gaps were identified in the city's services, as many individuals who utilize the Elgin Street Mission and Blue Door Soup Kitchen were left without a warm place to eat after receiving their meals.

Ward 11 Coun. Bill Leduc and Ward 5 Coun. Robert Kirwan brought forward a motion to have a pair of construction trailers set up across the road from the Samaritan Centre on Elgin Street, where individuals could warm up while they eat.

The proposal has been discussed at numerous meetings of council with no decision reached as yet. City council got the news in December that Centre de Santé on Frood Road would no longer be able to provide a warm place for the city's less fortunate to eat, as the building's landlord had raised concerns over people congregating in the area.

In response to Centre de Santé's service being cut off in January, city staff proposed a number of alternatives, with council voting to have staff take a closer look at making use of space at the Sudbury Community Arena and board rooms at 199 Larch St. (Tom Davies Square).

The city has also been working in collaboration with the YMCA and ParkSide Centre to create 50 spaces for people to warm up while they eat their meals, making the space available  from 11 a.m. to 1 p.m. for lunch and 5:30-7 p.m. for dinner from Monday to Friday, in conjunction with meal times at the Blue Door Soup Kitchen.

Costs associated with having the warming centre at the YMCA are approximately $200,000, with the capacity to house up to 36 people. The maximum utilization as of Dec. 17 was 10 people accessing the space for brunch; the average daily usage for dinner was between two and six people and less than five people for lunch.

The Kingsway Entertainment District cleared a pair of legal hurdles this year and it's all systems go for the $100-million project that will house a community arena, along with plans for a hotel and casino.

Sudbury businessman Tom Fortin was at the centre of the fight against the KED, taking the city to Superior Court this summer in a two-day hearing where Fortin's lawyer Gordon Petch made arguments to quash four byalws adopted by the City of Greater Sudbury under the Planning Act.

The four bylaws in question permitted the development of an arena/event centre and a casino outside of the city’s downtown area, at the Kingsway Entertainment District.

Superior Court Justice Gregory Ellies ruled to dismiss Tom Fortin’s application, stating in his decision that the city did not act in bad faith, was not biased in their decision and did follow proper procedure when passing the bylaws.

In the wake of the Ellies' decision, Fortin filed and appeal that was dropped shortly after, citing legal costs as a significant hurdle. The appeal would have cost an estimated $200,000, and significant cost awards would have likely been added in the event that Fortin lost the appeal.

Additionally, the city was seeking costs of more than $200,000 from the original appeal that had been dismissed. With Fortin choosing to withdraw his appeal of the Superior Court decision, the city opted not to pursue financial restitution in the matter.

With the Superior Court matter cleared from the table, the Local Planning Appeals Tribunal (LPAT) was able to move forward with its decision in appeals made by Fortin and Christopher Duncanson-Hales of the Sudbury BIA.

On Dec. 23, the LPAT released its decision, dismissing all of the appeals related to the Kingsway Entertainment District.

"I'm very pleased with the results of the LPAT and of the Superior Court earlier this year," said Greater Sudbury Mayor Brian Bigger.