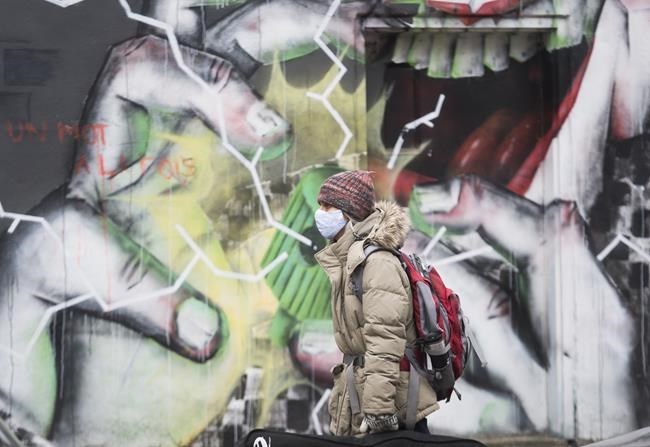 News of another promising COVID-19 vaccine candidate stirred hope Monday as Canada's case count surpassed the 300,000 mark, with the two hardest-hit provinces continuing to report more than 1,000 daily new infections and a sudden spike in Nunavut triggering a two-week lockdown.

Moderna's announcement that its COVID-19 vaccine appears to be 94.5 per cent effective, according to preliminary data, comes a week after a similar announcement from Pfizer.

Both American companies are among those that have signed agreements with Canada, and have asked Health Canada to review their products.

But she said Canada is still months away from being able to distribute a vaccine, noting both drugs must still be approved for use in the country. The federal government has deals to buy millions of doses of both if they are approved, she said.

The provinces and territories are also working out their distribution plans, Hajdu said.

"We’ve still got a long way to go. So I encourage everyone to continue to follow the public health measures that are keeping us safe, to reducing their gatherings, to making sure that they’re staying home when they’re sick and washing their hands and wearing a face mask," she said.

Ontario's health minister, Christine Elliott, said Monday the province has a team preparing a plan for the distribution of a vaccine, including ethicists to ensure the immunization is doled out "fairly and equitably and to the people that absolutely need it the most."

Calling it a "top priority," Elliott said the province will be "ready to go as soon as the vaccines are available."

Isaac Bogoch, an infectious disease specialist at the University of Toronto's Temerty Faculty of Medicine, said that based on the data available, "there is room for cautious optimism" regarding both vaccine candidates.

But he said no one should be surprised if there are hiccups along the road, noting many questions remain unanswered, such as the drugs' effectiveness in a real-world setting and how long immunity will last.

Even once vaccines are available for distribution, it will take a long time for everyone to be immunized, and the daily case counts show the spread of the virus is accelerating, Bogoch said.

"Certainly there can be a lot of damage done between now and when vaccine programs are rolled up," he said.

British Columbia reported almost 2,000 more cases of COVID-19 over three days on Monday, pushing the national case count past the 300,000 threshold. It reached the grim milestone less than a month after hitting the 200,000-case mark; Canada first reached 100,000 cases in June.

Nunavut, which had no infections until this month, ordered a two-week shutdown of non-essential businesses and schools as its tally rose to 18 cases.

The restrictions are set to begin Wednesday, and include closing child-care centres to all but the children of essential workers, and shuttering health centres except for emergency services.

Ontario and Quebec, the two provinces that account for the bulk of Canada's COVID-19 case count, reported 1,487 and 1,218 new infections, respectively, on Monday as well as 10 and 25 more deaths.

In Manitoba, where 392 new cases and 10 additional deaths were logged Monday, the province's chief public health officer warned that hospitals are near capacity.

Dr. Brent Roussin said it appears some people aren't understanding that they need to stay home, noting one COVID-19 case over the weekend had come in contact with 85 others.

Over the weekend, Alberta saw a daily increase of more than 1,000 cases, though that dropped back to 991 on Sunday.

Meanwhile, Green party Leader Annamie Paul says the federal government needs a national task force of scientists to create a co-ordinated response to COVID-19 across the country, saying the current approach is leading to mixed messages.