COVID-19 or no, Iran must release black boxes from January crash: Champagne

OTTAWA — Despite the daunting hurdles posed by the COVID-19 pandemic, Iran must live up to its pledge to co-operate with the investigation into its downing of a commercial airliner in January, says Foreign Affairs Minister Francois-Philippe Champagne
0
Mar 26, 2020 2:32 PM By: Canadian Press 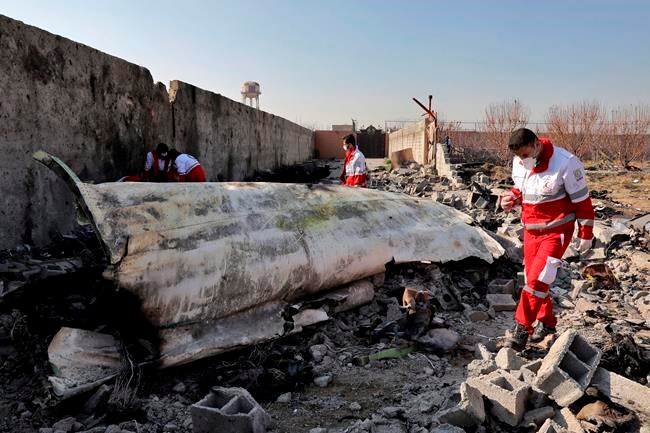 OTTAWA — Despite the daunting hurdles posed by the COVID-19 pandemic, Iran must live up to its pledge to co-operate with the investigation into its downing of a commercial airliner in January, says Foreign Affairs Minister Francois-Philippe Champagne.

That includes the unfulfilled, two-week-old promise by Tehran to surrender the flight recorders of Ukraine International Airlines Flight 752, which the Iranian military shot down on Jan. 8. All 176 people aboard were killed, including 55 passengers who were Canadian citizens and 30 who were permanent residents.

In separate interviews with The Canadian Press, Champagne and Andriy Shevchenko, the Ukrainian ambassador to Canada, said the black boxes have not been sent to Kyiv as Iran had pledged.

Iran's representative to the International Civil Aviation Organization in Montreal promised on March 11 to transfer them within two weeks to assist with Ukraine's investigation into the crash.

Iran is one of the hardest-hit countries in the pandemic with more than 27,000 cases of the virus and more than 2,200 deaths.

"On one hand, this is a crisis, a health crisis of unprecedented proportion that we're living," Champagne said.

"But on the other hand, we need to make sure that we get answers and that the tragedy ... that the families are still living. We have to push for these answers and push the Iranian regime for that."

The COVID-19 outbreak is presenting new challenges to the already-frustrated families of Canadian victims, who are having difficulty getting answers from Ottawa as the government  responds to the global health crisis.

Hamed Esmaeilion is a Toronto-area dentist who lost his wife, Parisa, and nine-year-old daughter Reera on the fight.

In an interview Thursday, Esmaeilion said the COVID-19 pandemic has forced the cancellation of several planned meetings between the families of those killed and Canadian officials.

Families had been hoping for updates on efforts to hold those responsible accountable and secure compensation from Iran and the airline. The RCMP is assisting Ukraine's criminal probe into the crash while the Transportation Safety Board is involved in Iran's flight-safety investigation.

"It has changed everything for us because we were supposed to have some meetings, especially here in Canada, and they've all been cancelled," Esmaeilion said. "Even family meetings, we have to do it all online."

It has also been difficult to self-isolate because of COVID-19 when he is still grieving his wife and daughter and struggling with frustration over Iran's continued refusal to turn over the jetliner's flight recorders, Esmaeilion said.

"I refreshed the (ICAO) website a hundred times yesterday to see if there's any new news, and there wasn't," Esmaeilion said. "It is very, very frustrating for us. I'm in touch with lots of families and we don't know what to do. We are really confused."

Champagne said he spoke this week with his Ukrainian counterpart to see if Iran had fulfilled its commitment. He was told Kyiv and Tehran are still working on the "terms of reference" for the transfer.

"Both parties are negotiating, I would say, these terms of reference," said Champagne.

Shevchenko said in an interview this week that his country expects Iran to fulfil its promise to hand over the flight recorders, and that the international community needs to work together to make sure it does.

COVID-19 "makes our work with Iran much more complicated and the best we hear from Iran is that because of the situation with the virus, they cannot do this and that," he added. "So, this definitely makes things slower. Nevertheless, we see no reason why we cannot advance."

Esmaeilion nevertheless worries COVID-19 has distracted Canadian officials as the federal government struggles to respond to the crisis and has eased the international pressure on Iran to co-operate with investigators and bring justice for the victims and their families.

"For most of the families, there's nothing more important than justice," he said. "And every morning when we get up, every night when we go to bed, we're just thinking about justice because it doesn't make sense what they did."

Champagne said the government isn't forgetting the promises it made to Canadian families after the tragedy. He said it has fulfilled two of them — gaining consular access to Iran and repatriating the remains of crash victims.

More work needs to be done on the crash investigation and securing compensation for the victims' families, he said.

"We stood up for Canadian families," Champagne said.

"We said to them we'd stand up for them from Day 1 and we will continue to do so. We're seeking answers from Iran. We want accountability, justice, transparency."

Supporters want commitment on status for asylum seekers on COVID-19 front
Jun 6, 2020 5:37 PM
Comments
We welcome your feedback and encourage you to share your thoughts. We ask that you be respectful of others and their points of view, refrain from personal attacks and stay on topic. To learn about our commenting policies and how we moderate, please read our Community Guidelines.