OTTAWA — Details of a program that will see the federal government buy surplus food from farmers and redistribute it to food banks and other community groups are coming soon, Liberal Agriculture Minister Marie-Claude Bibeau promised Tuesday.
Jun 9, 2020 12:03 PM By: Canadian Press 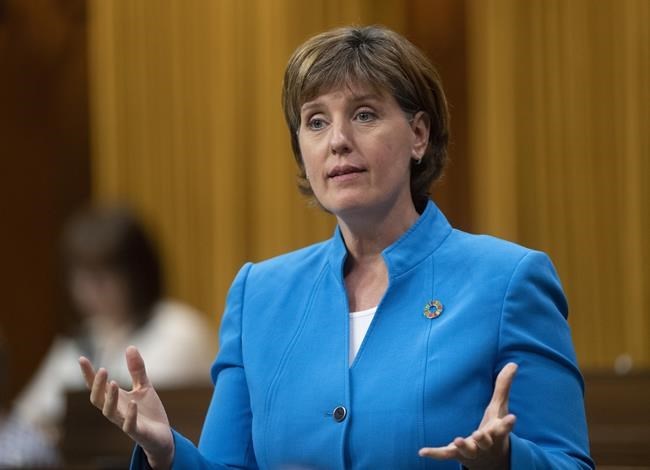 OTTAWA — Details of a program that will see the federal government buy surplus food from farmers and redistribute it to food banks and other community groups are coming soon, Liberal Agriculture Minister Marie-Claude Bibeau promised Tuesday.

The government announced the $50-million plan nearly a month ago as part of a suite of efforts to help the agricultural industry cope with the fallout from COVID-19.

Farmers are grappling with a surprise surfeit of products, as restaurants and the hospitality industry have largely shut down due to distancing restrictions. That means there's more food than there are consumers.

Among the results: potatoes are piling up and going bad in warehouses, milk is being poured down drains and there are too many cattle and pigs for processors to handle.

At the same time, food banks and community groups had been reporting increased demand for assistance as millions of Canadians suddenly found themselves unemployed.

Bibeau said the final details of how to marry the over-supply of food with the increase in demand for help are being worked out now.

"It's a matter of days before we inform everyone of the criteria of the programs but we have already started to work with the different industries who have surpluses that they can offer to the food-bank networks," she said Tuesday.

The funds won't address the entirety of the problem facing farmers; when it comes to potatoes alone, some 700 truckloads are currently going bad in New Brunswick alone, farmers there said late last week.

Those potatoes are last year's crop. Farmers are now struggling with how much to plant this year given uncertain demand come harvest time.

Bibeau said there are other avenues available to the industry to deal with those pressures, pointing — again — to existing risk-management programs.

Bibeau has insisted that the $252-million aid package she rolled out for the industry last month could be increased if farmers took full advantage of the existing supports.

Those programs are cost-shared with the provinces, and Bibeau said talks continue with them to see if they'll pony up more money this year.

But she said one element Ottawa won't move ahead on is a carbon-tax rebate for grain farmers. They had argued the carbon tax was hurting their bottom lines, given the massive amount of energy needed to dry their product.

Bibeau said Tuesday an analysis by the federal agriculture department concluded the actual cost is minimal, less than half a per cent of operating expenses for farms.

Only some of the COVID-19 related funding the Liberals have rolled out to help farmers is new money.

On Tuesday, Bibeau announced that some previously announced cash was also now being made available to help with the issue of food security.

Approximately $43.4 million has been freed up out of the local food infrastructure fund, part of a five-year program that was launched as part of a broader federal food policy in 2019.

Altogether, $50 million was allocated to reduce food insecurity and the first round of proposals saw 362 projects receive a total of $6.6 million.

Bibeau announced the program would now take applications for the second round of funding.

This report by The Canadian Press was first published June 9, 2020.

Who can dismiss the Governor General? A look at protocols and possibilities
Aug 9, 2020 1:00 PM
The latest numbers on COVID-19 in Canada for Aug. 9
Aug 9, 2020 11:42 AM
Comments
We welcome your feedback and encourage you to share your thoughts. We ask that you be respectful of others and their points of view, refrain from personal attacks and stay on topic. To learn about our commenting policies and how we moderate, please read our Community Guidelines.