Donald Trump on Elections Canada's disavowal of voting machines: 'THIS SAYS IT ALL'

WASHINGTON, D.C. — A tweet seeking to distance Elections Canada from the use of electronic voting equipment has earned a like from the president of the United States.
Nov 17, 2020 6:57 PM By: Canadian Press 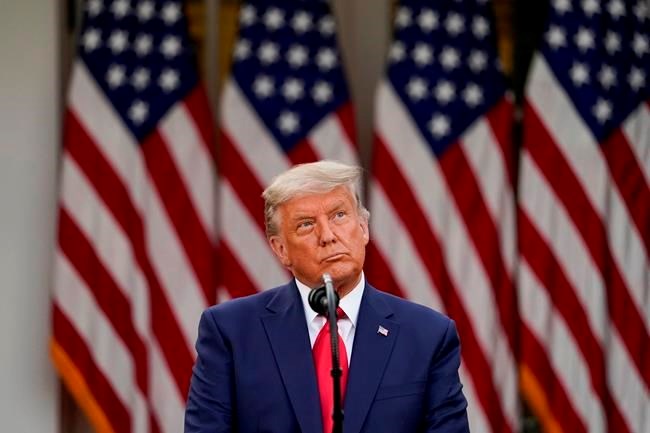 WASHINGTON, D.C. — A tweet seeking to distance Elections Canada from the use of electronic voting equipment has earned a like from the president of the United States.

Despite a lack of evidence, Donald Trump is accusing a Canadian maker of vote-counting machines of conspiring against him in the Nov. 3  presidential election.

Elections Canada tweeted Monday that it has never used tabulation equipment made by Dominion Voting Systems or anyone else in its 100-year history.

Trump retweeted the agency today in an effort to further cast doubt on the company, which was founded by Canadian partners and has offices in Toronto and Denver.

"THIS SAYS IT ALL," Trump tweeted Tuesday after Elections Canada pointed out that it only uses paper ballots that are counted by hand.

"Elections Canada does not use Dominion Voting Systems," the agency's Monday tweet read. "We do not use machines to count ballots."

Elections Canada issued another tweet Tuesday pointing out that Monday's posting was only intended to note they don't use vote-counting machines "and should not be construed as anything other than that."

Dominion, founded in Toronto in the aftermath of the voting debacle that followed the 2000 U.S. election, has been pushing back hard against spiralling conspiracy theories fuelled by the president, his supporters and Trump-friendly media outlets.

"Dominion Voting Systems categorically denies false assertions about vote-switching issues with our voting systems," the company declares in an all-caps headline on its website.

"An unsubstantiated claim about the deletion of 2.7 million pro-Trump votes that was posted on the internet and spread on social media has been taken down and debunked by independent fact-checkers."

The website also cites last week's declaration by the cybersecurity wing of the Department of Homeland Security that the 2020 election was "the most secure in American history."

Despite failing to win the necessary number of electoral votes and falling more than five million votes short of Democratic challenger Joe Biden, Trump has steadfastly refused to concede the election.

Biden, for his part, has called Trump's intransigence "embarrassing" and warned Monday that the current administration's refusal to co-operate with his transition team could worsen the death toll from the COVID-19 pandemic.