TORONTO — A former downtown bar owner has been granted bail pending his appeal of a conviction for the gang sexual assault of a barely conscious woman.
Feb 20, 2020 1:39 PM By: Canadian Press 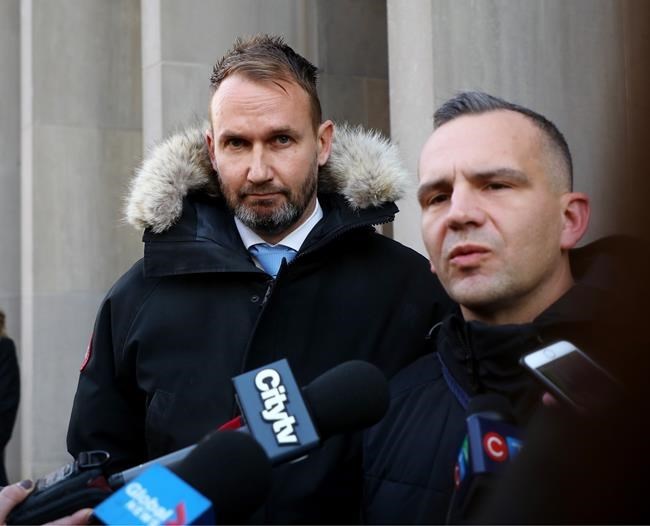 TORONTO — A former downtown bar owner has been granted bail pending his appeal of a conviction for the gang sexual assault of a barely conscious woman.

In his decision, a Court of Appeal justice ruled that Gavin MacMillan had strong grounds to challenge his conviction and nine-year sentence given problems with how his jury was selected.

"This argument is far removed from being frivolous," Justice James MacPherson said in granting bail. "Indeed, it is almost the opposite; it is almost certain to succeed."

MacMillan and his bar manager, Enzo De Jesus Carrasco, were convicted in November of sexually assaulting and administering a noxious substance to the 24-year-old victim. The trial judge called the hours-long, videotaped attack violent and degrading.

Even before sentence was imposed earlier this month, MacMillan had indicated he planned an appeal related to the selection of the jury — an issue that potentially affects dozens of other jury trials.

The appeal turns on federal legislation that took effect in September and removed peremptory juror challenges, which allowed either defence lawyers or prosecutors to veto prospective jurors without explanation. Ontario's top court has already ordered a new trial in one such case in which it found the new jury rules were improperly applied.

"Barring something unforeseen arising, the appeal in this case will almost certainly be allowed and a new trial will be ordered," MacPherson said. "Accordingly, this factor counts strongly in the applicant's favour."

MacPherson also noted that MacMillan complied with his bail conditions — including house arrest — before and during his trial, and imposed a similar condition. Carrasco had remained behind bars throughout.

The prosecution opposed bail for MacMillan, arguing a successful appeal is far from a certainty given that the Crown is hoping to fight the Appeal Court decision that threw dozens of jury trials into doubt. The Supreme Court of Canada, the prosecution said, may yet overturn the earlier ruling or find that a new trial is not the answer.

On Thursday, the Supreme Court did agree to hear a prosecution appeal of a case involving convicted terrorists Chiheb Esseghaier and Raed Jaser, whose case also turns on the technicalities of jury selection.

MacPherson, however, called the prosecution's arguments speculative. He called the offences of which MacMillan was convicted "grave" and their circumstances "appalling," but said releasing him would not harm confidence in the administration of justice.

This report by The Canadian Press was first published on Feb. 20, 2020.

Public health officials urge Canadians to limit contacts again as COVID-19 cases rise
Sep 22, 2020 1:04 PM
Comments
We welcome your feedback and encourage you to share your thoughts. We ask that you be respectful of others and their points of view, refrain from personal attacks and stay on topic. To learn about our commenting policies and how we moderate, please read our Community Guidelines.