OTTAWA — The Liberals said Monday they will cede some ground on the WE Charity affair, which has been mired in filibusters and duelling committee motions for nearly two months — but appeared to yield only minimal turf.
Nov 16, 2020 6:04 PM By: Canadian Press 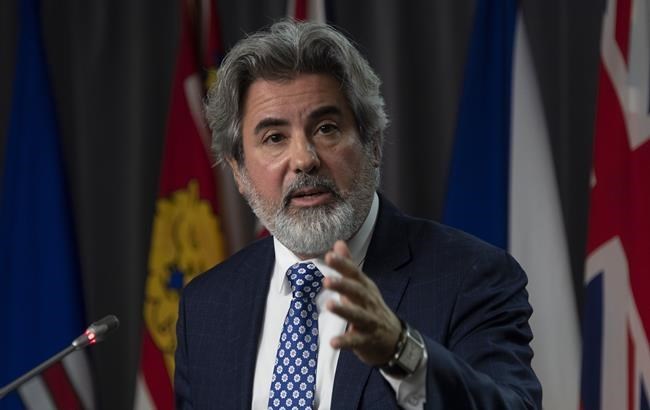 OTTAWA — The Liberals said Monday they will cede some ground on the WE Charity affair, which has been mired in filibusters and duelling committee motions for nearly two months — but appeared to yield only minimal turf.

Government House leader Pablo Rodriguez said his party has agreed to send unredacted documents linked to the controversy to the parliamentary law clerk, who will then decide what information needs to be blacked out to protect personal privacy.

The mild concession came in response to a Conservative motion that calls on the Speaker of the Commons to rule that redactions made to more than 5,000 pages of government documents on the WE affair amount to a breach of the finance committee's privileges.

"We have now agreed to send unredacted documents to the Law Clerk, except those that were redacted to protect cabinet confidences and unrelated material as already allowed by the committee motion," Rodriguez said Monday in a Twitter post.

His proposal differs somewhat from the Conservative motion, which would leave it in the law clerk's hands to black out confidential cabinet communications and irrelevant content.

Conservative finance critic Pierre Poilievre said cabinet confidences make up nearly half of the originally submitted documents, with "unrelated material" also hidden from view. Rodriguez's new proposal would make no difference other than to disclose the names and phone numbers of some individuals that were redacted for privacy concerns.

Nonetheless, Poilievre said his party is willing to meet the Liberals halfway.

"If the government insists that it needs to put aside what it claims are cabinet confidences, fine, we’ll do that for now," he said Monday at a news conference.

The issue of unrelated documents arriving in the law clerk's hands already redacted remains a "sticking point," he added, leaving it up in the air whether the Tories will accept Rodriguez's compromise.

"If they’re totally unrelated to the WE controversy, why did the government put them in the bundle of WE documents and then cover them in black ink?" Poilievre asked.

"We just want the parliamentary law clerk to look at them and confirm whether or not they are irrelevant to our study."

Rodriguez, whose tweets pre-empted Poilievre's press conference by one hour, accused the other parties of refusing to hear from public servants in committee and scolded the opposition for not setting "partisanship aside."

The broader controversy revolves around the government's decision to pay WE Charity $43.5 million to manage a grant program for student volunteers, despite the organization's close ties to Prime Minister Justin Trudeau and his family.

WE backed out of the arrangement in early July, within days of the decision being made public. The program was later cancelled.

Trudeau and former finance minister Bill Morneau, who also has close ties to WE, have apologized for not recusing themselves from the decision to involve the charity. Both are under investigation by the federal ethics commissioner.

Despite Monday's moves towards a compromise over the documents sent to the finance committee, accusations of delay tactics and procedural shenanigans did not let up in another venue.

At the House of Commons ethics committee — which remains stuck on a motion to examine government spending during the pandemic, including Trudeau's relationship with WE — Liberal MP Han Dong proposed a study on how to protect elections from cyber interference.

"If the Liberals are going to talk the clock into the coming weeks about the U.S. electoral system, I think that’s very problematic," Angus said, adding it had nothing to do with the ethics committee.

Earlier this month, Liberal MPs filibustered ethics committee hearings with ruminations ranging from the role of Parliament to the value of the organizations the opposition wants to examine.