EDMONTON — Lawyers representing the City of Edmonton say the city decided not to light a bridge in colours requested by an anti-abortion group because it risked polarizing the community, a judge heard Friday.
Nov 13, 2020 8:47 PM By: Canadian Press 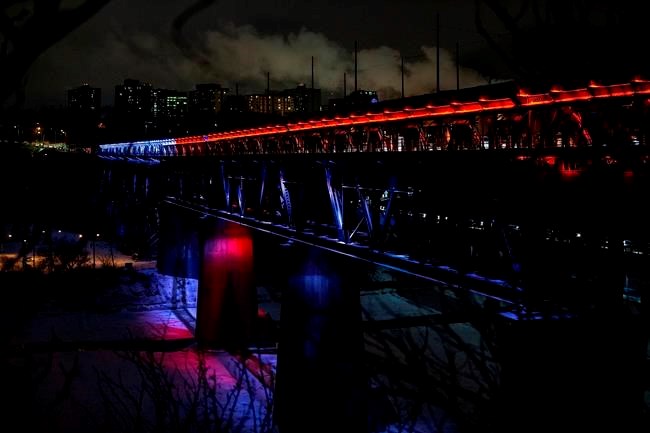 EDMONTON — Lawyers representing the City of Edmonton say the city decided not to light a bridge in colours requested by an anti-abortion group because it risked polarizing the community, a judge heard Friday.

The Alberta March for Life Association asked a judge last year to review the city's decision to cancel lighting the High Level Bridge in 2019 in the group's requested colours — pink, blue and white —  after the city initially approved the request.

A lawyer for the Justice Centre For Constitutional Freedoms, which is representing the association, said the pink and blue colours would have represented unborn boys and girls.

The bridge stretches over the North Saskatchewan River and is outfitted with 60,000 programmable lights that are often lit to recognize major events and cultural celebrations.

Documents filed in court say Jerry Pasternak, vice-chairman of the association, asked for the bridge to be lit to recognize the association's annual March for Life, which the group has been co-ordinating in Edmonton since 2008.

The city approved the request in March, but later cancelled it in April, a month before the scheduled march, citing the "polarizing nature of the subject matter."

James Kitchen, a lawyer for the Justice Centre For Constitutional Freedoms, told court that Edmonton is home to a diverse population with a wide variety of views, values and beliefs, including people with pro-life views.

"The expression of pro-life opinions is part of the diversity of expression found in a free society, and is protected by the charter," Kitchen said. He pointed to section 2 (b) of the Canadian Charter of Rights and Freedoms that gives Canadians the fundamental freedom of expression.

Kitchen also argued that the city has lit the bridge for causes in the past that promoted sexual and gender diversity, LGBT Pride, and various Islamic holidays and celebrations.

He noted that the city has also lit the bridge in association with International Pregnancy and Infant Loss Awareness Day and disability awareness campaigns.

Kitchen said Edmonton’s decision last year unjustifiably violated the association's freedom of expression and that the policy the city uses to manage the lighting of the bridge violates free expression.

Lawyers representing the city countered that the city has permitted the group to gather for its annual march, including closing roads. They said that shows that freedom of expression was not suppressed.

They argued that lighting the bridge -- which is owned by the city and maintained with tax dollars -- makes some citizens interpret the lights as a message from the City of Edmonton.

"Various postings (against the lighting of the bridge) on Twitter represent a microcosm of community at large," said Shayne Abrams, a lawyer representing the city.

She pointed to a frenzy that erupted on social media when the city announced it would light the bridge for the anti-abortion group.

"These (messages) show that the message of March For Life polarizes the community and shows that some citizens take the lights as a message from the city," Abrams said.

She agreed many topics that engage public discourse can be polarizing but argued that some do it in an extreme way.

"The one we are talking about (abortion) is one of those. What the city is doing, by using the word 'risk',  they are trying to set a minimal level," Abrams said.

Abrams said there is a benefit to refusing to light the bridge for particular causes because it can limit detrimental effects of polarization.

The court adjourned Friday evening with no word on when a decision would be made.