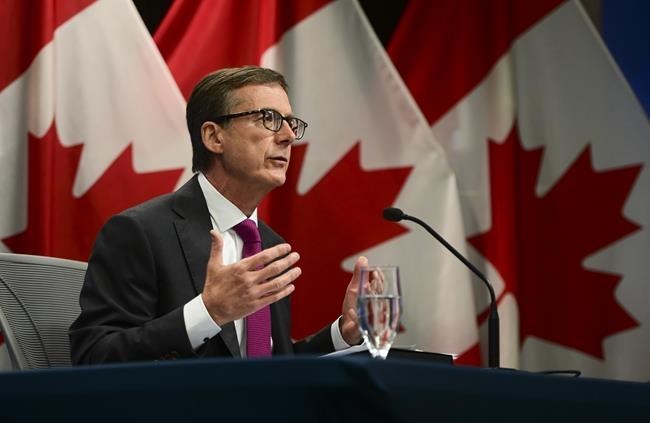 OTTAWA — Canada's top central banker gave MPs a detailed defence of the Bank of Canada's buying spree of government debt Thursday, saying it is aimed at lowering borrowing costs across the country.

The Bank of Canada has launched an unprecedented bond-buying program that effectively lowers borrowing costs for the federal government as its racks up a historic deficit.

It now holds just under one-third of federal debt, with the bank believing it can scale up those purchases before throwing a wrench into credit markets.

But the purchases have put Bank of Canada governor Tiff Macklem in a political hot seat, with Conservatives on Parliament Hill warning the central bank about appearing too cosy with the governing Liberals.

During an appearance at the House of Commons finance committee Thursday, Macklem said the bank isn't financing the federal government, but is reducing the cost to borrow for households and businesses.

He said the central bank will stop buying government bonds once the recovery is well underway, which is likely to happen before inflation gets back to the Bank of Canada's two per cent comfort zone.

"We're not financing the government."

The bond-buying program is the central bank's first foray into what's known as quantitative easing, which is a way for central banks to pump more money into the economy.

The central bank started the program as it dropped its trendsetting policy rate to 0.25 per cent to drive down interest rates. The purchasing program was designed to drive down rates even more on things like mortgages.

What the bank has done is buy up government bonds to spur demand and time lower interest rates, particularly for borrowers using terms of between three and 10 years like homeowners, homebuyers and businesses.

The bank's balance sheet has swelled since March and now holds about $344 billion in government debt, or roughly 30 per cent of federal debt, after purchasing about $163 billion in bonds.

Macklem said central banks generally can hold between 50 and 70 per cent of debt before it begins to impair credit markets.

The bank has taken its foot off the gas recently for its purchasing program as the market conditions have improved, allowing it to reduce its total minimum weekly purchases to $4 billion.

Conservative finance critic Pierre Poilievre argued the purchases were inflating financial assets, and enriching the mostly affluent people who own them to push up inflation.

"Inflationary costs are borne disproportionately by the poor and the disadvantaged," Poilievre said. "So you're effectively transferring an enormous sum of wealth to those who have financial assets, while diluting the wages of working-class people."

Pressed by Conservatives on the committee for a date when the buying will come to end, Macklem said the uncertain path of the pandemic prevents him from being able to circle a day on the calendar.