VANCOUVER — An RCMP officer who oversaw a small team based at Vancouver's airport says he dismissed a suggestion the night before Meng Wanzhou's flight landed to arrest the Huawei executive by boarding her plane. Sgt.
Nov 26, 2020 7:30 PM By: Canadian Press 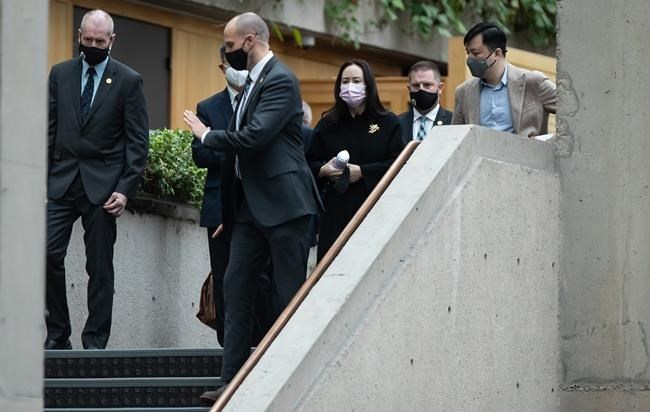 VANCOUVER — An RCMP officer who oversaw a small team based at Vancouver's airport says he dismissed a suggestion the night before Meng Wanzhou's flight landed to arrest the Huawei executive by boarding her plane.

Sgt. Ross Lundie said Thursday he was concerned when the officers tasked with executing the arrest raised it on Nov. 30, 2018.

Lundie testified in B.C. Supreme Court that he told the Mounties that boarding a plane for an arrest was "not something we do" unless there is an immediate public safety concern, and that the Canada Border Services Agency needed to be included in the discussion.

Having worked on a national security team alongside border officers, Lundie said he understood the agency had responsibilities to screen foreign nationals arriving in Canada and he was mindful of stepping on their toes.

“I had concerns with that right off the bat and I told them that,” Lundie said.

Lundie is testifying in an evidence-gathering hearing as part of Meng's ongoing extradition case.

Her lawyers are collecting information to bolster their allegations that Canadian officials improperly collected evidence against Meng under the guise of a routine immigration exam before informing her of her arrest and right to counsel.

Meng's lawyers allege the plan to board the plane changed to allow a "covert criminal investigation" to occur before her arrest at the behest of U.S. investigators.

Ultimately, Meng would spend nearly three hours in a border agency screening area on Dec. 1, 2018, while the Mounties waited in an adjoining room.

Lundie said the case came to his attention about a week before Meng’s arrest, when an Ottawa-based national security officer called to ask about the flow of passengers at Vancouver’s airport and whether a traveller could exit the airport before first seeing border officers.

It's common to receive such calls and the Mountie did not indicate why he was calling or identify Meng, Lundie said.

Although the two arresting officers worked in another unit, Lundie was looped into the case on Nov. 30 because of his experience at the airport.

Lundie suggested organizing a meeting with the RCMP and the border agency on the morning before Meng's arrest to co-ordinate her detention.

"I said we need to confirm if (the border agency has) an interest in this or not," he said. "And to see if ... it would make more sense for them to examine Ms. Meng and for us to conduct an arrest in the secondary area after it's complete."

Lundie told the court that the relationship between the border agency and the RCMP has improved over his years working in national security, but there have been cases where one or the other overstepped its bounds.

"It's usually due to a lack of understanding and there are times when we have to stickhandle that," he said.

Over the course of the exam, Lundie said he received at least two requests for updates from a Federal Bureau of Investigation attache and one from the RCMP in Ottawa. He told them the exam was ongoing.

The FBI agent sounded "concerned" he said, and agreed under questioning the concern was likely about timing.

Lundie said he doesn't typically get requests for updates from the FBI.

"It's not something I'm used to but it seemed reasonable," he said.

However, he denied any covert planning occurred.

"Did you co-ordinate with the CBSA or United States law enforcement to execute the provisional arrest warrant after Ms. Meng's examination by the CBSA in an attempt to extract information from Ms. Meng for U.S. law enforcement?" Crown lawyer John Gibb-Carsley asked.

Fenton suggested to Vander Graaf that she told the court more during her testimony than was included in her affidavit as part of a "coverup" to protect her fellow officers.

Vander Graaf's 2019 affidavit said she had no independent memory of a conversation with her subordinate regarding whether the serial numbers for Meng's electronics had been shared with the FBI, although she made note of a conversation in a notebook.

In court, she described both the conversation and emails she received related to the conversation, which said she understood to mean an officer would pursue legal channels to share information with the FBI.

"When I prepared this affidavit, I went through my notes and my emails and I prepared it to the best of my recollection at that time. I recall, after preparing further, the events I testified to today," Vander Graaf said.

"I'm suggesting you tailored your evidence to suit what you think protects the RCMP in relation to this issue," Fenton said.

"That is absolutely not true," Vander Graaf said.