A police officer shot and killed in the line of duty this week was a joyful, gentle giant who loved his four children dearly, a church leader said Friday as investigators probed the incident that also left a 60-year-old man dead.
Nov 20, 2020 4:28 PM By: Canadian Press 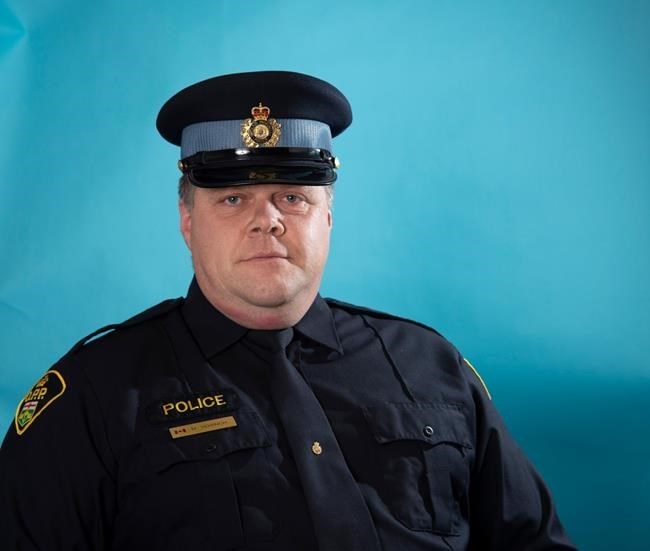 A police officer shot and killed in the line of duty this week was a joyful, gentle giant who loved his four children dearly, a church leader said Friday as investigators probed the incident that also left a 60-year-old man dead.

"Anyone who ever met Marc knew he had a big physical presence, but professionally, he never used that to be intimidating," Quackenbush said. "His presence was always really calm and peaceful.

He said Hovingh "loved his family more than anything" -- he had three daughters and a son, all young adults -- and often offered to help out with youth events at the church where his wife was heavily involved.

"Whenever we had special events, he was happy to entertain the youth, taking them out to the woods or in his boat, or entertaining them with some crazy characters or shenanigans," Quackenbush said.

He said the church community is mourning, but they take comfort knowing he's in a better place.

"All of our towns here are pretty small, and everyone maybe doesn't know everybody, but everyone's pretty well connected," he said. "And when you're a police officer, you're a little bit more public and a little better known."

He said Hovingh was "liked and respected across the island."

Manitoulin, with a population of roughly 13,000, is the largest freshwater island in the world.

The circumstances surrounding Hovingh's death are still under investigation.

Officials have said a 60-year-old man -- who has yet to be publicly identified -- also died in Thursday's shooting.

The SIU said Hovingh was shot and killed after he and another officer responded to a call about an "unwanted man" on a property in Gore Bay -- one of several towns on Manitoulin Island.

The agency said he and the man exchanged gunfire, and both died after being taken to hospital.

The other officer was uninjured in the incident.

While rare, on-duty police deaths happen in Canada every year.

Const. Heidi Stevenson was one of 22 people -- not including the gunman -- killed in a mass shooting in Nova Scotia in April. Last year, Const. Allan Poapst died in a highway crash north of Winnipeg.

And in 2018, Const. Robb Costello and Cost. Sara Burns were killed in a shooting in Fredericton.

The provincial police have said they'll release information about a funeral service for Hovingh in the coming days.

In the meantime, the mayor of Gore Bay said, the shooting has left the community reeling.

"We're a large island, but we are small in numbers," he said. "Everybody knows everyone, and it's pretty devastating."