Ontario COVID-19 task force and Biden's mask plan: In The News for Dec. 4

In The News is a roundup of stories from The Canadian Press designed to kick-start your day. Here is what's on the radar of our editors for the morning of Dec. 4 ... What we are watching in Canada ...
Dec 4, 2020 3:07 AM By: Canadian Press 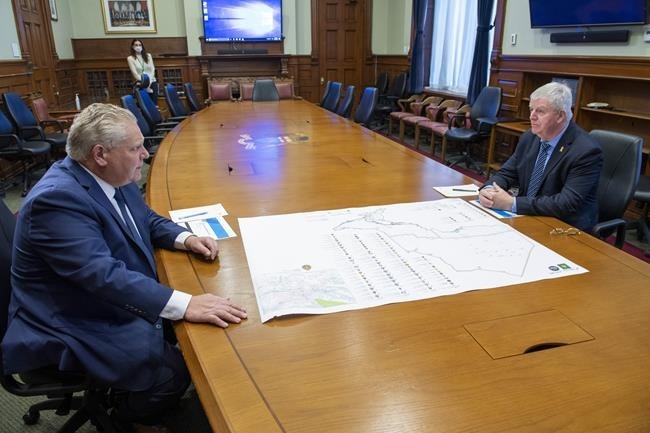 In The News is a roundup of stories from The Canadian Press designed to kick-start your day. Here is what's on the radar of our editors for the morning of Dec. 4 ...

What we are watching in Canada ...

Ford said yesterday the team is being finalized and the province will be ready to distribute the vaccine whenever it arrives.

The task force will include medical, information technology, and logistics experts.

Health Minister Christine Elliott says the team will also include a bioethicist who will make recommendations about who should receive access to the vaccine first.

The province's chief medical officer of health has also said some regions of the province could be moved today into further restricted measures in the province's pandemic response.

Statistics Canada will say this morning how Canada's job market fared last month as COVID-19 case counts rose along with a new round of public health restrictions.

The labour force has clawed back about three-quarters of the three million jobs lost during lockdowns in March and April.

The country has seen six consecutive months of job increases since then, but the pace of gains slowed between September and October.

Expectations for November is that the country will eke out another gain.

Joe Biden says he will ask Americans to commit to 100 days of wearing masks as one of his first acts as president, stopping just short of the nationwide mandate he's pushed before to stop the spread of the coronavirus.

The move marks a notable shift from U.S. President Donald Trump, whose own skepticism of mask-wearing has contributed to a politicization of the issue. That's made many people reticent to embrace a practice that public health experts say is one of the easiest ways to manage the pandemic, which has killed more than 275,000 Americans.

The president-elect has frequently emphasized mask-wearing as a "patriotic duty" and during the campaign floated the idea of instituting a nationwide mask mandate, which he later acknowledged would be beyond the ability of the president to enforce.

Speaking with CNN's Jake Tapper, Biden said he would make the request of Americans on inauguration day, Jan. 20.

Biden also said he asked Dr. Anthony Fauci to stay on in his administration, "in the exact same role he's had for the past several presidents," as the director of the National Institute of Allergy and Infectious Diseases, the nation's top infectious-disease expert.

What we are watching in the rest of the world ...

Four people died following an explosion in a silo that holds treated biosolids at a wastewater treatment plant near the southwest England city of Bristol, police said Thursday.

Three Wessex Water employees and one contractor died in the incident, which is not being treated as terror-related, Avon and Somerset Police Chief Inspector Mark Runacres said at a media briefing. A fifth person was injured during the explosion at the plant in the industrial area of Avonmouth, but the injuries are not considered life-threatening, Runacres said.

"The fire service led the rescue operation but sadly, despite the best efforts of all those involved, we can confirm there have been four fatalities," he said.

Runacres would not speculate on the cause of the explosion. He said it took place in a silo holding organic matter from sewage before it "is recycled to land as an organic soil conditioner."

He said the explosion did not create any ongoing concerns for public safety.

British Prime Minister Boris Johnson said "our hearts go out" to the victims and their families.

Gov. Gen. Michaelle Jean granted an unprecedented request from Prime Minister Stephen Harper to suspend Parliament until late January, a move that avoided a non-confidence vote set for Dec. 8, that would have brought down the minority Conservative government.

Quebec pianist and composer Andre Gagnon has died at the age of 84 from Lewy body disease, a neurodegenerative disorder.

During a career spanning 40 years, Gagnon embraced many styles from baroque, to classical and disco.

Born in Saint-Pacome-de-Kamouraska, on the south shore of the St. Lawrence River on Aug. 2, 1936, Gagnon composed from the age of six. After attending the Montreal Conservatory of Music, he studied in Paris after obtaining a grant from the Quebec government.

Just days after the discovery of a large party in one of its rental properties, Airbnb says it has a plan to curb New Year’s Eve parties this year while Canada works to slow the spread of the COVID-19 virus.

In addition to its ongoing ban on parties, Airbnb now says guests will need a history of positive reviews on its app to reserve an entire home for New Year’s Eve in Canada. The policy also extends to the U.S., Mexico, Australia, the U.K., France and Spain.

"We believe this plan will help prevent large gatherings while supporting the type of safe, responsible travel that benefits guests, hosts and the neighbourhoods they call home," the company said.

Airbnb is making an exception for one-night bookings made up to Tuesday, based on data that suggest bookings made before early December rarely involve parties.

This report by The Canadian Press was first published Dec. 4, 2020