OTTAWA — As he contemplates a failed Conservative leadership campaign that put the cart before the horse — trying to win a federal election instead of first securing his party — Peter MacKay is reminded of an age-old cliche: "Nice guys finish last.
Sep 16, 2020 1:26 PM By: Canadian Press 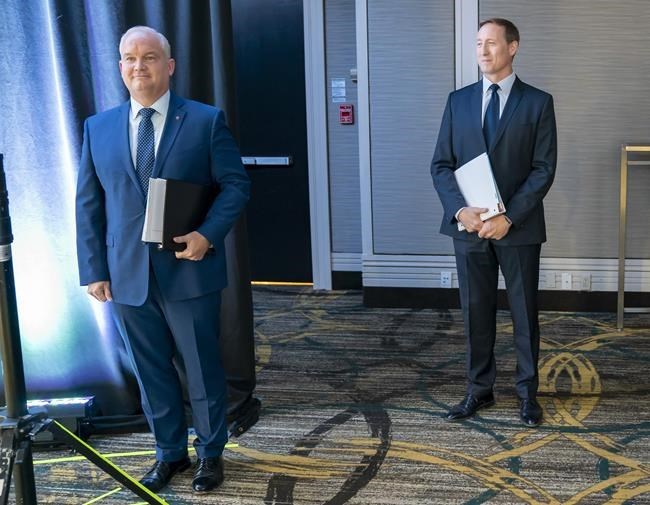 OTTAWA — As he contemplates a failed Conservative leadership campaign that put the cart before the horse — trying to win a federal election instead of first securing his party — Peter MacKay is reminded of an age-old cliche: "Nice guys finish last."

And while the longtime Tory leader-in-waiting has few regrets, he does worry that the ever-growing influence of social conservatives within the movement could lead to more disappointment at the polls if victor Erin O'Toole can't keep them in check.

In a long and wide-ranging interview with The Canadian Press, MacKay said the examination of his second-place finish in the contest is still underway, but several factors are evident.

The pause forced by the COVID-19 pandemic stopped MacKay's early momentum, and a decision by party organizers to extend the deadline for membership sales gave his rivals time to catch up. He also cited "ring rust" from being out of politics for five years and the immense reach of social media in amplifying minor errors.

But he also acknowledges that the premise upon which he ran his campaign was flawed.

"The plan was in retrospect too much focused on the next steps and not enough on winning the party," MacKay said.

That plan: don't bother with negative attacks on other Conservatives or even the Liberals. Instead, present a new vision for the country.

That also meant sidestepping issues dear to some of the most powerful grassroots members of the party: social conservatives.

"When you open the door to a crack of daylight on these social issues it becomes very very difficult to win the country, to present the party as modern, inclusive, as a party that is committed to focusing more on the economy than debating the past and I just made that very clear to my team from the beginning," he said.

"It was exploited to the max, that this was disrespectful, that it wasn't inclusive to social conservatives. Not true, it was the same approach as Stephen Harper."

MacKay believed that clinching the win required what would be needed to win a general election.

So his team focused on selling memberships to disaffected Liberals and to lapsed Tories in ridings where the party hasn't been strong before. In some areas, this paid off: membership growth was strong in the Atlantic provinces and in some urban centres.

But the party uses a points system to choose a leader. Each of the 338 ridings in the country is worth 100 points. How many points a candidate gets is based on their percentage share of the vote. In ridings with tiny member counts, many of which are in Quebec, a handful of members can have an outsized influence on the results.

MacKay's campaign thought it had a lock on Quebec, racing against the clock — and against O'Toole — to mount a massive get-out-the-vote effort in the final days. His team's projections, however, didn't match up against reality, MacKay admitted, and he's asked his team pointed questions to figure out why.

That team was a mix of loyalists from his days with the PCs, newer recruits to the cause under Harper's leadership and a handful of slick campaign operatives credited with delivering victories for conservatives elsewhere in the country.

Tensions within the team led to some missteps, MacKay acknowledged. He downplayed those errors, though they were seized upon by his rivals, like one where in an email he used a derogatory term for a transgender-rights bill.

But he said what really upended things was the COVID-19 pandemic.

MacKay, with his history as leader of the former Progressive Conservative party has always been something of a celebrity among Tories: his presence at any event is guaranteed to bring people in, and his ability to rally a crowd comes naturally. His team had plotted a national cross-country tour that would get him in front of big groups he'd woo with rah-rah speeches on his vision for the country.

Making an appearance at the general meetings for the provincial conservative parties was also a priority; ahead of the shutdown MacKay attended both the Nova Scotia and Ontario PC events, though some grumbled he didn't put in enough facetime with attendees. He chalked his truncated time in Nova Scotia up to weather-related flight delays, and says he did work the circuit well into the wee hours of the morning in Ontario.

But the full stop put to those in-person opportunities by the pandemic meant MacKay was instead stuck in his basement, doing as many as six virtual meet-and-greets a day with hyper-engaged local partisans who wanted to pick over policies.

Still, that his campaign managed to raise $3 million — though does have a debt of about $1 million — is proof that he succeeded on some fronts, he said.

Of the three other candidates, two — Derek Sloan and Leslyn Lewis — came from the well-organized, well-funded and highly motivated social conservative wing of the party.

Even before the race had begun, MacKay was on the outs with that faction after describing social conservative issues as a "stinking albatross" around the party's neck in last fall's election campaign.

During the race itself, he was also captured on video telling social conservatives to "park" their concerns.

Meanwhile, O'Toole, though he was publicly in support of LGBTQ rights and a woman's right to choose to terminate a pregnancy, made direct pitches to Sloan and Lewis supporters, saying he'd always respect their points of view.

Social conservatives are on their way to making up a majority of the party's base, MacKay said, and whether and how the party can evade or redirect the line of attack that ultimately sank former leader Andrew Scheer rests on O'Toole.

"The next election, if it comes soon, this is a penetrating statement of the obvious, but there isn't going to be a lot of time to nuance or address these issues that you raise: modernization, inclusivity, contrasting in a way that doesn't scare the masses who are not card-carrying members of any party," he said.

MacKay claims no bitterness at his loss, but it seeps into his voice when he talks about how his rivals painted him as "Liberal-lite."

"From an objective perspective, which I cannot be, that is beyond insulting."

He used similar language to describe a claim from the O'Toole camp that MacKay operatives hacked into O'Toole's database and used material from there to leak videos. Disinformation that was circulated about MacKay's wife was also hurtful, he said.

Modern campaigns rely too heavily on stoking fear and anger, with candidates too often promoting themselves as standing in a crowd with "a pitchfork and a flaming torch," MacKay said.

That makes some people disengage entirely from politics, he said.

That's in part why, MacKay said, he sought to frame his efforts in a more positive light.

"But what's that saying about nice guys?" he said.

So, he and his family have moved back to Nova Scotia, where he had intended to go to run for a seat as party leader. He's not ruling out a run again anyway, he said, and has met with the riding association in Central Nova already.

But MacKay said he's had a good run in politics, and if that's not where he returns, he's comfortable with that choice.

"Being labelled a nice guy is not a bad thing."

This report by The Canadian Press was first published Sept. 16, 2020

Demonstration in Fredericton as private abortion clinic to lose its doctor
Sep 26, 2020 2:39 PM
Comments
We welcome your feedback and encourage you to share your thoughts. We ask that you be respectful of others and their points of view, refrain from personal attacks and stay on topic. To learn about our commenting policies and how we moderate, please read our Community Guidelines.