PMOops: Trudeau's office releases account of him scolding O'Toole before he does it

OTTAWA — A spokesman for Prime Minister Justin Trudeau says his office accidentally sent out an account of a phone call with Conservative Leader Erin O'Toole that hadn't happened yet.
Nov 27, 2020 8:07 PM By: Canadian Press 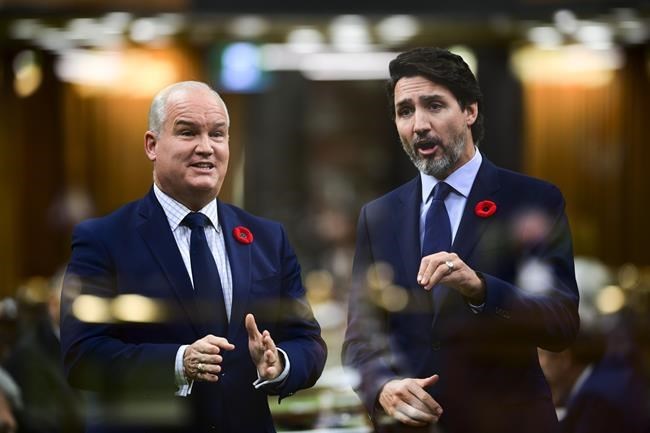 OTTAWA — A spokesman for Prime Minister Justin Trudeau says his office accidentally sent out an account of a phone call with Conservative Leader Erin O'Toole that hadn't happened yet.

The premature account of the call Friday said Trudeau chided O'Toole about Conservative MPs downplaying the deaths of Albertans and comparing the novel coronavirus to the flu.

Alberta MP Rachael Harder shared a newspaper column on her Facebook page this week that pointed out provincial statistics saying that just 10 of 369 Albertans who had died of COVID-19 as of mid-November were otherwise healthy.

And Ontario MP Dean Allison described COVID-19 as "influenza" in a talk-radio interview.

After the call, the Conservatives said Trudeau raised neither of these incidents with O'Toole.

And a second read-out of the call from the PMO, after the call had actually taken place, dropped all mention of the matter.

It said simply that the two leaders had discussed "the COVID-19 pandemic, as well as vaccine distribution in Canada," along with issues related to president-elect Joe Biden’s incoming administration in the United States.

The Tory leader went into the conversation with proposals for how Canada can improve its relationship with the U.S. under Biden.

In a letter to Trudeau, O'Toole said responding to the COVID-19 pandemic must be the first priority, including ensuring a continent-wide response to vaccine supply, the production of personal protective equipment and managing the border.

O'Toole said after that must come dealing with the threat posed by China, and that Canada should seek to join an existing dialogue among the U.S., Australia, India and Japan to oppose Chinese military expansionism.

The letter also talks about the Keystone XL oil pipeline, a project that outgoing President Donald Trump approved but Biden opposes. O'Toole said it must be made clear to Biden the project is important to Canada's view of the bilateral relationship with the U.S.

The letter cites a need for a collective effort on combating climate change, and a call to modernize the binational defence agreement known as Norad, which would include having Canada join the ballistic missile defence program.

A copy of O'Toole's letter to Trudeau was obtained by The Canadian Press.

"This period of transition to the incoming Biden administration represents a unique opportunity to advance Canada's interests and values on the world stage," O'Toole wrote in the letter.

"It is my sincere hope the Canadian and U.S. governments can work together for the mutual benefit of both our peoples who have endured so much this past year."

A Conservative read-out after the call said the two leaders concluded their chat by mutually "reaffirming the importance of eliminating COVID-19 and by wishing their families well."

'After a tumultuous year:' Canadians tune in to Joe Biden inauguration amid pandemic
Jan 20, 2021 1:55 PM