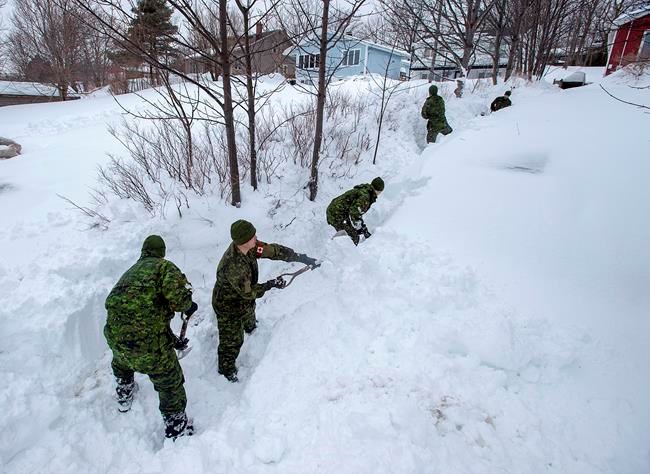 With a state of emergency set to extend into its fifth day Tuesday, travel remained difficult across eastern Newfoundland, and some residents were relying on each other for food.

Canadian Army and Royal Canadian Navy members were being deployed around the city Monday, where traffic was reduced to one lane between towering snowdrifts. Dump trucks hauling loads of snow shared the road with police vehicles, pickup trucks carting snowblowers and pedestrians stretching their legs after days of begin housebound.

The provincial capital is still reeling after Friday's blizzard dumped 76 centimetres of snow amid winds gusting over 150 kilometres per hour.

With a few flurries in the air, a team of four green-clad soldiers chipped away Monday at a steep, buried driveway on Topsail Road, a task one of them estimated took a few hours.

A civilian passerby joined in with his snowblower, and the soldiers were encouraged by people in passing vehicles, who honked horns and shouted their thanks.

Bill Ash, 70, said the sight of a clear driveway was a relief after being snowed in for four days.

"I was in quite a predicament until I saw our military men turn up this morning," he said. "I really appreciate everything they done."

He said his daughter had tried to come by but couldn't make it close to the house. Ash has a snowblower and made some progress himself near his side door before being overwhelmed by the volume of snow.

Gunner James Howie was part of the crew clearing his driveway, where only the antenna of Ash's car was visible under the drift of snow.

Howie said he joined the army three years ago partly out of a desire to help people during natural disasters, though this was his first time responding to a snowstorm.

"It's an amazing community," Howie said of St. John's. "Everyone I've seen has either thanked us, honked the horn as they're passing and certainly cheered us on while we're working."

Defence Minister Harjit Sajjan said 450 troops— including about 175 reservists — will be in Newfoundland by Tuesday to help the province dig out from the storm.

"When you have 175 reservists who at the same time live in the communities who are affected as well, going out and helping others, it's something to be really proud of, of our reserves and how we come together," Sajjan said in Winnipeg where he was attending a federal cabinet retreat.

Sajjan said it is "way too early" to say how long military assistance will be necessary, but he said the troops will stay as long as they're needed. He also said more will be sent if necessary.

Meanwhile, the province urged neighbours to continue to check on seniors, people with disabilities and others at risk from days of being shut in without access to food stores or prescription refills.

"In many cases, the roads are still not safe to drive on, and emergency responders need unhindered access to provide emergency services," a release from the provincial Municipal Affairs Department said Monday afternoon.

The City of St. John's announced its state of emergency would remain in effect Tuesday, but some stores will be allowed to reopen to sell "basic foods." Most other businesses have to remain closed, with exceptions for gas stations and some pharmacies.

The city advised residents to "be prepared to purchase enough food for your family for 48 hours. Future opportunities to open food stores during this state of emergency will be evaluated and communicated as conditions warrant."

St. John's International Airport announced it would remain closed to commercial flights until Wednesday morning. It has been open since Sunday for military, emergency and medevac flights.

Search efforts continued Monday for 26-year-old Joshua Wall, who was last seen leaving his home in Roaches Line on Friday to walk through a wooded area to a friend's home in nearby Marysvale.

The RCMP says the Avalon North Wolverines Search and Rescue would focus Monday on areas off the trail where it's believed Wall was travelling on foot from his home.

Brad Tuck, a 30-year-old musician, has passed the time shovelling snow and writing a song about "Snowmaggedon 2020."

He said that after four days, some neighbours' food supplies were running low on his street in the centre of town.

"Some people are running out of things .... People are having to help each other with food, and if you're stuck, you make do with what you have at the moment," he said in a telephone interview.

His song's lyrics praise the resilience of residents: "All hands got together, everybody worked as one/ 'cause that's what Newfoundlanders do when there's work here to be done."

Assessing the soldiers' work at his St. John's home, Bill Ash remarked that while Newfoundlanders are prepared for wild weather, this month's storm will likely be the stuff of legend.

"We always have the one storm which we remember back on. Forget the one I was thinking about before, this is going to be the one, now, I think I'll remember for quite some time."

This report by The Canadian Press was first published Jan. 20, 2020.

Trudeau confers with cabinet ministers as rail blockades continue
Feb 16, 2020 4:04 PM
Trudeau to take pitch for UN Security Council seat to Caribbean starting Monday
Feb 16, 2020 3:49 PM
Alstom reaches preliminary deal to buy Bombardier train unit, report says
Feb 16, 2020 3:22 PM
Comments
We welcome your feedback and encourage you to share your thoughts on this story. We ask that you be respectful of others and their points of view, refrain from personal attacks and stay on topic. To learn about our commenting policies and how we moderate, please read our Community Guidelines.