Teen told police he was warned not to 'snitch' after sex assault at St. Mike's school

TORONTO — A teen boy told police he was warned not to "snitch" after being sexually assaulted by a group of fellow students at a renowned Toronto high school, and feared for his safety if he reported what happened, court heard Thursday.
Dec 3, 2020 5:46 PM By: Canadian Press 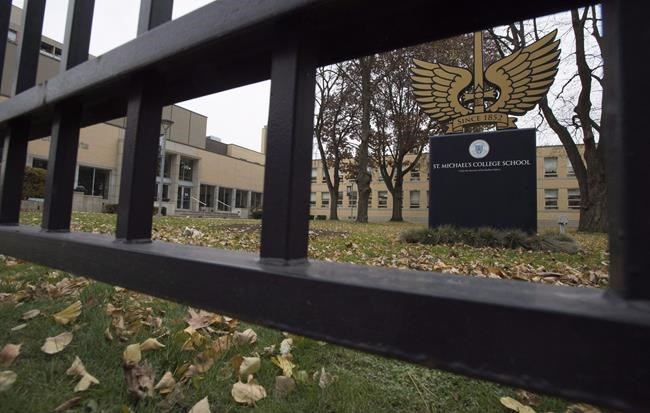 TORONTO — A teen boy told police he was warned not to "snitch" after being sexually assaulted by a group of fellow students at a renowned Toronto high school, and feared for his safety if he reported what happened, court heard Thursday.

In a video played in court, the teen tells a police investigator that two of the students involved in the October 2018 incident at St. Michael's College School approached him in the weeks that followed and urged him not to tell anyone about it.

There was chatter throughout the school about the incident, and the teen says he may have eventually confirmed to a friend that it had occurred without divulging any of the details. But he didn't tell his parents or any staff at the school, he says in the video.

At one point in the recording, the lead investigator in the case asks the teen whether he had heard about this kind of behaviour before joining the school's football team.

The boy replies that he hadn't, nor had he seen or experienced anything similar in his many years of playing sports elsewhere.

"It's just a different culture at this school and on that team," he tells the investigator, Det. Const. Daniel Sunghing of the Toronto police sex crimes unit.

The evidence is being presented at the trial of another teen, who is accused in that incident and another one that also took place in the school's locker room in November 2018.

The teenage complainant described the October incident - in which he was sexually assaulted with a broom handle in the school's locker room after football practice - in a portion of the same video that was viewed earlier this week.

His account of that incident does not mention the accused, a former student of the school.

However, a second video played in court Thursday shows him telling police about the November incident, in which he says the accused played a role.

The teen says in that video that he witnessed a similar sex assault on another student in the school's locker room after a football game. That incident also saw a group swarm a student and sexually assault him with a broom handle, the boy recalls.

He tells police the accused at one point held down the victim's arms in that incident. Later, after the sex assault was over, the accused was also among those looking at a phone and laughing, the teen says in the video.

The teen recalls going over to the victim in the minutes after the incident, only to have that student threaten to assault him in the same manner.

He acknowledges to the investigator that he probably should have intervened to stop the attack on the other student, but says he was scared the group would turn on him instead.

Fear also held him back from reporting the November attack, he tells the officer in the video. The teen says he thought he would then be forced to disclose his own experiences and would be blamed for the expulsion of the perpetrators.

"They have a lot of friends around the school ... and I thought somebody would know it was me and come after me," he says.

The teen was initially among those charged in the November incident, though the charges were later dropped.

One of them also pleaded guilty to making child pornography for recording one of the sex assaults in a video that was then shared within the school and beyond.

Another student received a two-year probationary sentence with no jail time after pleading guilty. The charges against one other student was also dropped.

None of the teens involved in the case - including the accused, the complainants and some witnesses - can be identified under provisions of the Youth Criminal Justice Act.

The trial began in March but was on hold for several months due to the COVID-19 pandemic. It is scheduled to resume next Wednesday.

This report by The Canadian Press was first published Dec. 3, 2020