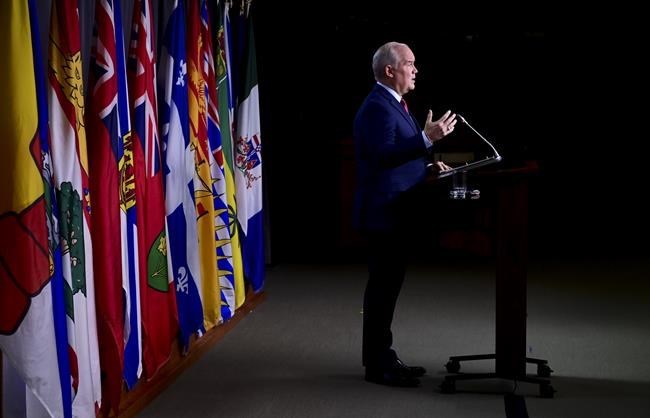 O'Toole levelled the industrial-espionage charge against Huawei and the Chinese Communist Party on Tuesday as he announced that the Conservatives are pushing the Liberals to decide within 30 days which companies can provide Canada's next-generation 5G wireless internet technology.

"The rise of Huawei was itself facilitated by years of industrial espionage conducted by China against Nortel," O'Toole told a press conference on Parliament Hill.

"Intellectual-property theft, counterfeiting and digital piracy are not exceptions to our dealings with China. They are the reality, and it's high time our government and many corporate leaders realize that," the Conservative leader added.

"We may have lost Nortel to Huawei … but we can and must learn from it. Because if we don't, we have to accept that another company will be next."

Nortel Networks Corp., a once mighty Canadian telecom giant, filed for bankruptcy in 2009, becoming one of the country's most spectacular business failures. Two years later, Nortel executed the biggest patent sale in history, raising billions in cash, when it auctioned off 6,000 patents to a consortium that included Apple and Microsoft.

The Conservatives introduced a motion in the House of Commons that demands the government decide whether Huawei ought to be banned from participating in Canadian 5G networks amid the ongoing diplomatic dispute between Canada and the People's Republic.

The United States is pressuring Canada and its allies in the Five Eyes intelligence-sharing network to ban Huawei because it views the company as an espionage arm of the Chinese state, a charge the company denies.

Prime Minister Justin Trudeau was noncommittal Tuesday on the timing of his government's long-awaited 5G decision. He reiterated his government's position that it is relying on the advice of security and intelligence agencies, is consulting with allies, and is committed to keeping Canadians and their businesses safe.

O'Toole said he wants the matter debated in the Commons and wants a new strategy for relations with China, because the Liberals have not done enough stand up to its intimidation of Canada.

Foreign Affairs Minister François-Philippe Champagne said during question period that he is open to working with the Conservatives on national security and foreign policy and would be prepared to propose constructive amendments moving forward.

Champagne said the government is working on a new plan to deal with China because China is not the same country it was four years ago and Canada needs a plan to respond to the "new reality."

O'Toole said China poses long-standing domestic risks, including threats from its foreign agents to Chinese-Canadians and the peddling of anti-western propaganda through post-secondary Confucius Institute partnerships as well as Chinese media outlets.

"It is now fashionable in some quarters to say that say that standing up for human rights is anti-Chinese racism and that denouncing Chinese state bullying is paternalistic," said O'Toole.

"When a dictatorship starts having so much influence, to the point that protecting Canadian citizens on Canadian soil is now an open question for a debate, you know we have a problem."

"Not all of it appears in the newspapers. On the contrary, a lot of the work that is done in important situations is never heard of at all," Trudeau said.

"We will always protect data and intellectual property, advance science and ensure that international research partnerships are always beneficial to Canadians," said Trudeau.

Champagne told reporters after a Monday night cabinet meeting that the government takes reports of Chinese foreign intimidation seriously and that he is working with Public Safety Minister Bill Blair, the RCMP and the Canadian Security Intelligence Service to address it.

"Our security and intelligence community, including CSIS and the RCMP, are actively investigating threats of foreign interference and espionage, and where the evidence exists, we will take action," Blair said Tuesday.

O'Toole acknowledged there could be an economic cost to Canada taking his proposed harder line against China, but he played down the potential effects.

Asked whether his party's action would expose Kovrig and Spavor to reprisals from their Chinese captors, he blamed Trudeau for not doing enough to secure their release.

"I think about the two Michaels every day, and I think many Canadians do," he said.