WASHINGTON, D.C. — Canada's decision to block American imports of certain prescription drugs from north of the border is getting stony silence from the Trump administration — a sign, one expert says, that the U.S. proposal is "dead in the water.
Dec 1, 2020 3:52 PM By: Canadian Press 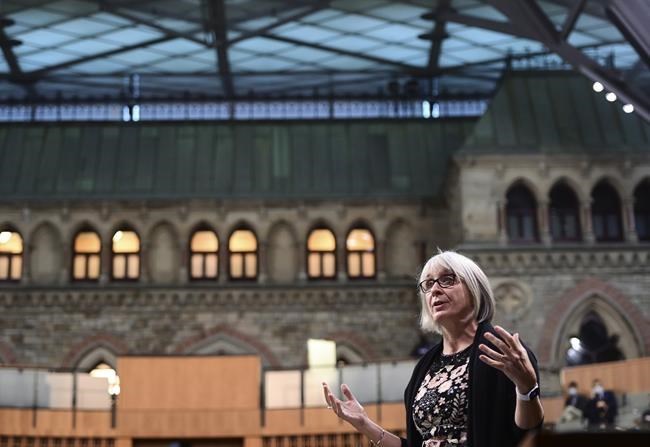 WASHINGTON, D.C. — Canada's decision to block American imports of certain prescription drugs from north of the border is getting stony silence from the Trump administration — a sign, one expert says, that the U.S. proposal is "dead in the water."

The measure, first floated by Donald Trump a year ago as a strategy to help reduce America's staggering drug costs, took effect Monday after the president signed a pre-election executive order in September.

On Saturday, however, Health Minister Patty Hajdu parried the effort with just days to spare, prohibiting bulk drug exports if they pose a risk of creating or worsening drug shortages in the Canadian market.

The White House referred questions about the new limits to the U.S. Department of Health and Human Services, which has yet to respond to repeated media queries about where Canada's move leaves Trump's plan.

That plan was "a desperate act by desperate people at a desperate time," said Dr. Allen Zagoren, a policy administration professor at Drake University in Des Moines, Iowa.

Canada represents only two per cent of global drug sales, and gets 68 per cent of its drugs from outside the country, Health Canada said in a news release announcing the export prohibitions.

The U.S. market, on the other hand, comprises 44 per cent of pharmaceutical sales around the world.

Buying drugs in Canada "was never realistic, ever," Zagoren said.

"Even if Canada said, 'Sure,' there's no way — Canada doesn't have enough drugs. But it allowed them to make a promise. And then they could argue, 'Well, Canada won't let us. So it's them, not us.'"

Kirsten Hillman, Canada’s ambassador to the U.S., said the two countries have been discussing the issue of drug imports for more than a year.

In those meetings, Canada has made it clear that given the relatively tiny size of the Canadian market, bulk imports from north of the border simply wouldn’t have the desired effect.

Canada's response is not a blanket export ban, but a "narrow and tailored" measure that applies only to those drugs meant for domestic consumption that are already in short supply or at risk at becoming scarce, she added.

Zagoren, who called Trump's proposal "dead in the water," said its failure could prove useful for president-elect Joe Biden's own efforts to address drug costs once he takes over the White House in January.

Biden has promised to reduce drug costs, including through imports, and to give the U.S. government insurance program known as Medicare the power to negotiate drug prices — a plan that has the blessing of congressional Democrats.

The fact that Trump's proposed solution has failed could provide Biden with helpful leverage in discussions with the all-powerful pharmaceutical industry, which has spent aggressively in its lobbying efforts to head off pricing reforms.

Biden has also promised to expand health insurance coverage to include more Americans, a move that has the potential to broaden the existing U.S. drug market.

Much will depend on the outcome of a pair of Senate run-off elections next month in Georgia, where Democratic challengers Jon Ossoff and Rev. Raphael Warnock are seeking to unseat Republicans David Perdue and Kelly Loeffler.

Should they both succeed, the 100-seat Senate will find itself in an even 50-50 split, giving the tiebreaking vote to Biden's vice-president, Kamala Harris.

"It really hinges on the Georgia election as to how far the U.S. government will go with regard to drug prices, and especially on Medicare," Zagoren said.

"There'll be a lot of negotiation in the backrooms with regard to pharmaceutical prices going forward. I do think there's going to be an attempt to bring them down, but I don't think it will be on the backs of the Canadians."

Prominent Canadians on the inaugurations of Joe Biden and Kamala Harris
Jan 20, 2021 2:27 PM