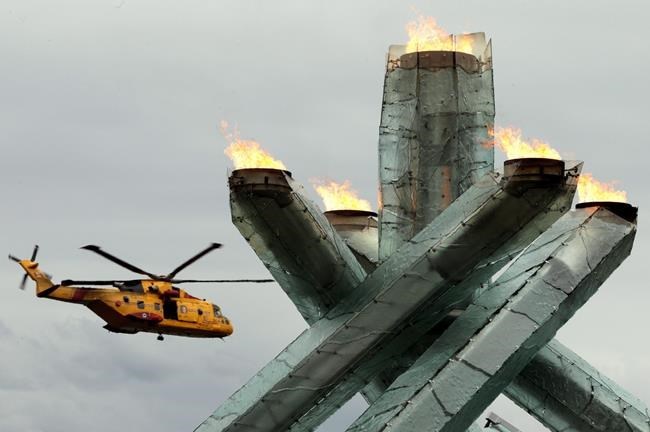 The hoisting of the crew aboard the 39-metre FV Atlantic Destiny onto helicopters began late Tuesday night and extended into the next morning after the ship caught fire at sea south of Yarmouth, N.S.

Lt.-Cmdr. Edward Forys, commander of a United States Coast Guard fixed-wing aircraft that flew above the scene, outlined the close co-operation of the two countries in the frightening seas.

"It (the Atlantic Destiny) was taking on water when we arrived and they didn't have any power or ability to steer," Forys said Wednesday in an interview from the coast guard base in Cape Cod, Mass. "So they were bobbing in the water and it was imperative we started to get people off that ship."

He estimated that winds were gusting from the northwest at more than 90 kilometres per hour, with sea swells of between five to seven metres pitching the stricken ship up and down as the hoists were lowered.

The lieutenant-commander said that at first, Canadian Forces CH-149 Cormorant helicopter lowered two of its search and rescue technicians on board the floundering vessel. He said the Cormorant carried out the first hoists, followed by lifts conducted by two American Jayhawk helicopters, with a total of 27 people brought into the rescue aircraft.

The 43-year-old officer said it was the most hoists during one incident he's witnessed in his 13-year career with the coast guard.

Each time the basket came down to lift up crew, the two Canadian search and rescue technicians on board would help them strap in, as the teams from the two countries communicated by radio and international hand signals, Forys said.

As this was going on, the American and Canadian fixed-wing aircraft were relaying information from the helicopters back to command centres on shore to provide updates on the condition of the survivors and indicate where they needed to be taken.

Lt.-Cmdr. Brian Owens of the search and rescue co-ordination centre in Halifax, confirmed the Atlantic Destiny sank at 10:36 a.m. Wednesday morning after succumbing to damage it sustained in the fire. Owens said 27 crew members were taken to Yarmouth by the three helicopter crews during the night, where they received medical attention, food and accommodations.

The remaining crew members, as well as two search and rescue technicians who were on board, were transferred at about 8 a.m. from the fishing vessel to the Canadian Coast Guard ship Cape Roger, Owens said, adding that they were on their way to shore on Wednesday afternoon.

The rescue co-ordination centre said it had received a call from the ship around 8 p.m. Tuesday night reporting there was a fire on board and that it had lost power and was taking on water as it drifted in the rough seas and powerful winds.

Ocean Choice, the owner of the ship, said other offshore fishing vessels, including the Cape LaHave, Maude Adams and the Atlantic Protector, took part in the rescue effort. "They're professional seamen and we have an experienced captain and crew members that handled this incredibly well," Ocean Choice CEO Martin Sullivan said in an interview Wednesday.

“The collective efforts of our crew and all those who came to assist the crew and the vessel resulted in the best possible outcome for this situation,” Blaine Sullivan, the president of Ocean Choice, said in a statement. “We are sincerely thankful to everyone that helped ensure that every single crew member is safe and accounted for.”

Ocean Choice said an investigation into what caused the fire will begin in the coming days, adding that no injuries were reported as a result of the fire. The company said the Atlantic Destiny, one of six of its offshore fishing vessels, harvests and freezes sea scallops. Its home port is Riverport, N.S.

The Atlantic Destiny was involved in a similar incident in 2017 when its main engine broke down, causing a blackout on the ship while it was southwest of Nova Scotia. No injuries were reported.

Martin Sullivan said the trawler had a major overhaul about a year ago and the ship was signed off by a classification society, which inspects and certifies vessels on behalf of Transport Canada.

Meanwhile, Forys said the teams returning from the international rescue were tired but satisfied by Wednesday's outcome. "This is a major case," the lieutenant-commander said. "This is one of the search and rescue cases you'll remember."

This report by The Canadian Press was first published March 3, 2021.

— With files from Sarah Smellie in St. John's, N.L.