WE registers as federal lobbyist and more 'Twilight' books: In The News for Aug. 14

In The News is a roundup of stories from The Canadian Press designed to kickstart your day. Here is what's on the radar of our editors for the morning of Aug. 14. What we are watching in Canada ...
Aug 14, 2020 8:37 AM By: Canadian Press 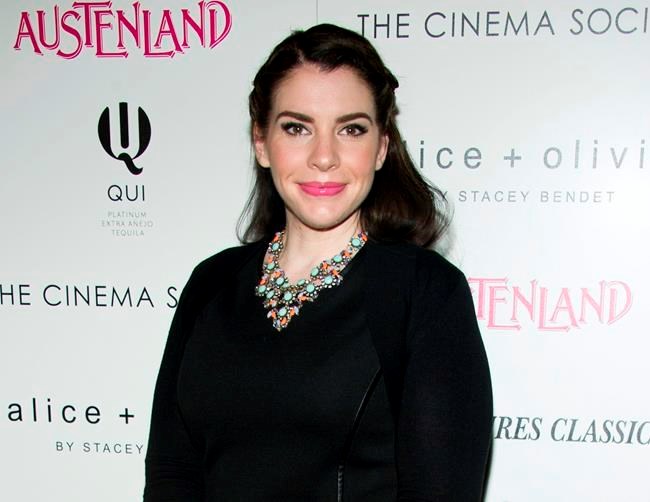 In The News is a roundup of stories from The Canadian Press designed to kickstart your day. Here is what's on the radar of our editors for the morning of Aug. 14.

What we are watching in Canada ...

WE Charity registered Thursday as a lobbyist of the federal government — months after it began talks with federal officials about potential programs to help Canadian youths during the COVID-19 pandemic.

The organization's executive director, Dalal Al-Waheidi, disclosed the registration during testimony before the House of Commons finance committee, which is probing the controversy surrounding the Liberal government's decision to pay WE Charity up to $43.5 million to administer a now-abandoned student grant program.

The controversy has triggered investigations by the federal ethics watchdog into potential breaches of conflict of interest rules by Prime Minister Justin Trudeau and Finance Minister Bill Morneau, both of whom have close family ties to WE Charity.

And it was blamed at least in part for WE Charity's announcement earlier Thursday that it is scaling back its operations, making dozens of layoffs in Canada and the United Kingdom, while also looking to sell some of its real estate holdings in Toronto.

WE Charity said its financial position has been greatly affected by the COVID-19 pandemic and "recent events," prompting it to shift programming and reduce staff.

In its filing to the federal lobbyist registry, WE Charity disclosed 65 communications with federal officials or ministers in 19 different departments or federal institutions, dating as far back as January 2019.

A long-stalled addition to the Chateau Laurier is closer to being built following an agreement between the historic hotel's owners and a heritage group that fought initial plans.

Heritage Ottawa says a new design for the addition would preserve a picturesque view of the landmark's rear courtyard and better mesh with the adjacent Rideau Canal.

The group is also applauding the use of Indiana limestone cladding and copper and bronze elements that reflect defining elements of the early 20th-century structure near Parliament Hill.

The new design and the settlement between Heritage Ottawa and Capital Hotel Limited Partnership, an affiliate of Larco Investments Ltd., will require approval by the City of Ottawa and a local planning appeals tribunal.

Original plans for the addition were widely panned by critics, variously described as resembling a giant air conditioner, shipping container or radiator tacked on to the regal building.

Ottawa Mayor Jim Watson tweeted he was pleased to see the parties had worked collaboratively and agreed on a new design.

There is still plenty of life in Stephenie Meyer's "Twilight Saga."

While such previous novels as "New Moon" and "Eclipse" were narrated by high school student Bella Swan, "Midnight Sun" is told from the point of view of Bella's lover, the vampire Edward Cullen.

Meyer's new novel came out Aug. 4. She began working on "Midnight Sun" years ago, but set it aside after an early draft leaked online. Her novels have sold more than 100 million copies worldwide, and were adapted into a blockbuster film franchise starring Kristen Stewart and Robert Pattinson.

Meyer once vowed never to write another "Twilight" book, but on Monday she revealed during an online event held by the chain store Books-A-Million that she is far from done with Edward and Bella.

"There are two more books I think in the world that I want to write," she said. "I have got them outlined and a chapter written I think of the first one, so I know it's there. I am not ready to do that right now. I want to do something brand new."

President Donald Trump on Thursday gave credence to a false and racist conspiracy about Kamala Harris' eligibility to be , fuelling an online misinformation campaign that parallels the one he used to power his rise into politics.

Asked about the matter at the White House, Trump told reporters he had "heard" that Harris, a Black woman and U.S.-born citizen whose parents were immigrants, does not meet the requirement to serve in the White House. The president said he considered the "very serious."

The conspiracy is false. Harris, who was tapped this week by Joe Biden to serve as his running mate on the Democratic ticket, was born in Oakland, California, and is eligible for both the vice presidency and presidency under the requirements. The question is not even considered complex, according to constitution lawyers.

Trump built his political career on questioning a political opponent's legitimacy. He was a high-profile force behind the so-called "birther movement" — the lie that questioned whether President Barack Obama, the nation's first Black president, was eligible to serve. Only after mounting pressure during his 2016 campaign did Trump disavow the claims.

Trump's comments landed in a blizzard of other untrue, racist or sexist claims unleashed across social media and conservative after Biden picked Harris, the first Black woman and the first Asian American woman on a major party ticket. The misinformation campaign is built on falsehoods that have circulating less noticeably for months, propelled by Trump supporters, and now the president himself.

"I have no idea if that's right," said Trump, who said he had read a column on the subject earlier Thursday. "I would have thought, I would have assumed, that the Democrats would have checked that out before she gets chosen to run for ."

What we are watching in the rest of the world ...

Israel and the United Arab Emirates announced Thursday they are establishing full diplomatic relations in a U.S.-brokered deal that required Israel to halt its contentious plan to annex occupied West Bank land sought by the Palestinians.

The historic deal delivered a key foreign policy victory to President Donald Trump as he seeks re-election and reflected a changing Middle East in which shared concerns about archenemy Iran have largely overtaken traditional Arab support for the Palestinians.

A spokesman for Palestinian President Mahmoud Abbas said the deal amounts to "treason," and should be reversed.

The agreement makes the UAE the third Arab country, after Egypt and Jordan, to have full diplomatic ties with Israel. They announced it in a joint statement, saying deals between Israel and the UAE were expected in the coming weeks in such areas as tourism, direct flights and embassies.

"Now that the ice has been broken I expect more Arab and Muslim countries will follow the United Arab Emirates," he told reporters in the Oval Office.

A leading terror suspect who has been linked to beheadings of hostages, including two Canadians and a Malaysian, has surrendered after being wounded in battle, officials said Friday.

National police chief Gen. Archie Gamboa said Thursday night that Abu Sayyaf commander Anduljihad Susukan gave up after negotiations with police in southern Davao city, where he was served warrants for at least 23 cases of murder, 6 for attempted murder and 5 for kidnapping.

He is the highest-ranking commander of the small but brutal Abu Sayyaf group to be taken into custody so far this year. The military has been waging a years-long offensive against the Abu Sayyaf, which has been blacklisted by the United States and the Philippines as a terrorist organization for past bombings, ransom kidnappings and beheadings. Many of its gunmen, mostly peasants and desperately poor villagers, have aligned themselves with the Islamic State group.

Security officials have blamed Susukan and his men for playing a role in cross-border kidnappings of tourists and other victims from the Malaysian state of Sabah on Borneo island, including a Malaysian citizen, who was beheaded by the militants in 2015 in their jungle base in southern Sulu province on the day when Malaysia's then-Prime Minister Najib Razak arrived in Manila to attend the Asia Pacific Economic Cooperation summit.

Susukan also helped finance the kidnappings in the south of two Canadian men, who were separately beheaded in Sulu in 2016 after the militants failed to get a huge ransom. Another Abu Sayyaf militant, Ben Yadah, murdered the two Canadians and remains at large, a military officer said.

Susukan surrendered to a Muslim rebel chief after the accidental explosion of his M203 rifle grenade in a gunbattle with troops in Sulu severed his left arm. Military officials had believed he was killed but later learned he was in the custody of Nur Misuari, who leads an armed group which signed a 1996 peace deal with the government.

This report by The Canadian Press was first published on August 14, 2020.