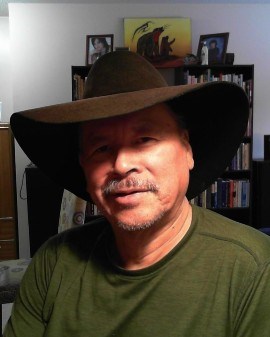 It is with heavy hearts that we announce the passing of our brother, father and friend Patrick as he began his spirit journey on Saturday, April 24, 2021 at the age of 60.  Patrick is the son of Bernadette Nadjiwan and Ambrose Stanley Corbiere.  Patrick is survived by his mother, sister Sharon (Rick), brother Christopher (Pam), and brother Shawn (Jennifer) and nieces Lesley, Summer, Cierra, Maxine, Keisha and Hunter, nephews Eric, Mark and Nodin.  Patrick was a great uncle to Tyler, Haley, Katelyn, Sonny and Jer Bear.   Loving father of Amanda Corbiere and Spencer Corbiere.  Special cousin Gerry, (Janice) daughters Vicky, Little Bean and Laura (Rob).  Also survived by great aunt Elizabeth Panamick and aunt Lavina (Corbiere) Johns and Uncle Hubert Corbiere.  Predeceased by his father Ambrose, sister Stella and brothers Jason and Terrance and aunts Gertrude Pheasant, Ernestine Trudeau and Hilda Nadjiwan.

Patrick was an avid talker!  A champion of First Nation issues.  He had the greatest sense of humour and a personality to go with it!  He will be missed ever so much by cousins in the Trudeau Clan, the Merilainen Clan, the Pheasant Clan and by special friends Moe, Nanabush, Wayne and all who have come to know and work with him.

His daughter wrote, "His spirit is at peace on his journey home now where he will be reunited with all those we've lost and I know wherever he is he is making everyone laugh and sharing those great stories he's known for sharing."

A celebration of life will be held at a later date.  Cremation Services by Simple Wishes of the North. Sudbury.

Provided by: Simple Wishes of the North Inc.