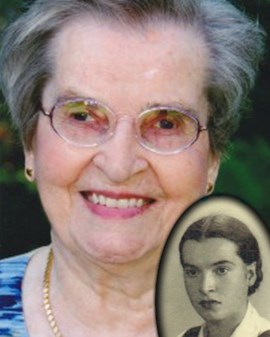 In Loving Memory of Henryka Teresa Gorecki, who passed away peacefully at Extendicare York on January 18, 2021. She was born on July 15, 1921 in Wloclawek, Poland. Daughter of the late Jan and Czeslawa Sadecki. Sister to Jozef and Bogumila (predeceased). Beloved wife of Jozef (Joe) Gorecki (predeceased 1996). Loving mother of daughter Renata (Jorma) and son Stephen (Ellen) both of Lively. Cherished “Babcia” of 5 granddaughters: Sari of Winnipeg MB, Karin (John) of Palmerston North, New Zealand, Liisa (Trevor) of Regina SK, Sabine of Sudbury and Megan (Phil) of Cold Lake AB. Proud “Prababa” of six great-grandchildren: Kaija, Elise, William, Eva, Samuel and Connor. Henryka planned on becoming a nurse and was about to start her schooling in Warsaw when WW2 began with the bombing of the city. She escaped Warsaw with her prayer book as her only possession. Returning home she was then taken to Germany and forced to work on a farm for the duration of the war. After the war she trained and worked as a nursing aide with orphans in a refugee camp until she immigrated to Canada in 1948. She met Joe through mail correspondence; they married the following year and settled in Sudbury where they were active members of the Polish community. Upon Joe’s retirement, summers were spent in Lively and winters in Florida for 20 years. After Joe's death, she lived happily for many years at Meadowbrook retirement village. Henryka's joy of cooking Polish food, her sewn kitchen hand towels, knitted mittens and in later years her colourful crocheted afghans will be missed by all. Many thanks to 2nd floor staff at Extendicare York for the care given to her these past few months. Private family service with internment in the Park Lawn Cemetery mausoleum. Having known hunger during her early years and the war, Henryka's wish was that any donations that may be made in her memory, be made directly to the “Walden Food Bank” via the Sudbury Food Bank web site. https://www.sudburyfoodbank.ca/donate/ . Arrangements have been entrusted with Ranger’s Cremation and Burial Services Ltd.