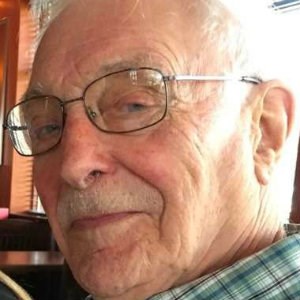 Passed away peacefully on Saturday June 8th at Maison McCulloch Hospice following a brief battle with cancer. He was predeceased by his parents Pearl (Pike) and William Morgan, his sister Thelma (Tellie) Clarke and wife Patricia (Giroux). Stan always bragged about “immigrating” from Newfoundland (before it became part of Canada) to Toronto, Ontario. While in Toronto he met up with and married Eileen. He will be missed by their children Gary (Jan) of Elliot Lake, Bruce of Wahnapitae, Gail (Stephen Mitchell) of Halifax and Cindy (Robert Sisson) of Chesterville. He will not be forgotten and loved by his second family Rod Giroux (Cheryl) of Manitoulin Island, Wendy (Michael Grenon) of Sudbury, and Brent Giroux of Whitby. He was Bompy to many but especially to his 13 grandchildren and 6 great-grandchildren. Also called Skipper by some grand and great grandchildren. Stan was a sportsman, active in his community and enjoyed being around people. As a young man, Stan enjoyed many sports especially soccer and basketball. In Pembroke, he joined the Civitan Club and became flagman at local stock car races. In Espanola, he was a hockey referee, trainer and served on the board of directors. Also, while in Espanola, he was introduced to fishing (Northern Ontario style) by some great neighbours and spent many hours relaxing in the boat. When he moved to Massey, he continued his community involvement as a member of the Arena Board, Fair Board, Medical Board and as a councillor for the Township. Later in life, his interests turned to vacations in warmer climates with his wife and spending time with his grandchildren. He will be dearly missed by many! We would like to express our sincere appreciation to Maison McCulloch Hospice. From the loving welcome and beautiful grounds to the person-centered menus and the extraordinary care and support that the team from Hospice provided to our “Bompy” throughout his stay with you. We thank you from the bottom of our hearts. Donations to the Hospice would be appreciated. At Stan’s request there will be no public visitation or service, cremation will take place. For flowers, donations, or messages of condolence, www.lougheed.org. Arrangements entrusted to the Jackson and Barnard Funeral Home.