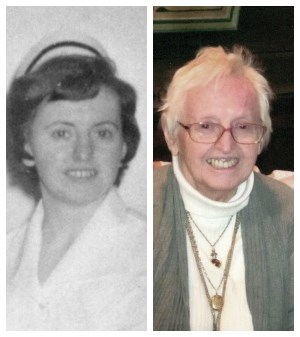 In Loving Memory of Marian Lois Rothe (nee MacKenzie) 80 years. Passed away peacefully on Sunday, March 29th, 2020 at Health Sciences North, Sudbury. She was a devoted and loving wife, mother and grandmother. Beloved wife of 52 years to Dietrich “Dieter” Rothe predeceased in April 2019. She is survived by her son Peter (Kerry Anne) of Waterloo, Ontario, and daughter Suzanne Rothe of Greenfield Park, Quebec. Sadly missed by her grandchildren Connor, Renee, and Rose. Dear sister of Jane O’Neil (Tony) of Wellesley, Nova Scotia, Leona of Halifax, Nova Scotia, Peggy MacKenzie-Young (John) of Portage Lake, Nova Scotia, Judy Ballah-LeBlanc (Bob), of Halifax, Nova Scotia and Carlotta MacInnes (Gordon) of Halifax, Nova Scotia. Marian was born in Christmas Island, Nova Scotia on July 9th, 1939 to Archie Alex and Katie (McMaster) MacKenzie both predeceased. She trained at St. Rita Hospital, in Sydney, Nova Scotia graduating in 1959 as a Registered Nurse. She later earned an Honours in History degree from Laurentian University in 1988, Sudbury. She worked as a nurse in Montreal, Bonavista, Newfoundland and Arichat, Nova Scotia. before settling in Sudbury and marrying Dieter in 1966. Marian published with her father The MacKenzie’s History of Christmas Island Parish and later his Gaelic Song book, her own The Barra Settlement at Grand Narrows 1804 to 1904 and others. She volunteered widely, made hundreds of quilts, wrote and traveled extensively with Dieter throughout their lives. Her life was guided by her faith and her devotion to the Sacred Heart of Jesus. Presently there will be no visitation or service. A family service will be held at a future time. Interment in St. Barra Cemetery in Christmas Island. Donations to the Northern Cancer Foundation or a charity of your choice would be appreciated by the family. Arrangements entrusted to the Jackson and Barnard Funeral Home. For donations and messages of condolence, www.lougheed.org.