All hands are on deck at one Toronto vaccination clinic where surgeons and students alike are working together to inoculate as many people as possible in an effort to contain a tidal wave of new COVID-19 infections.
Apr 16, 2021 2:14 PM By: Canadian Press 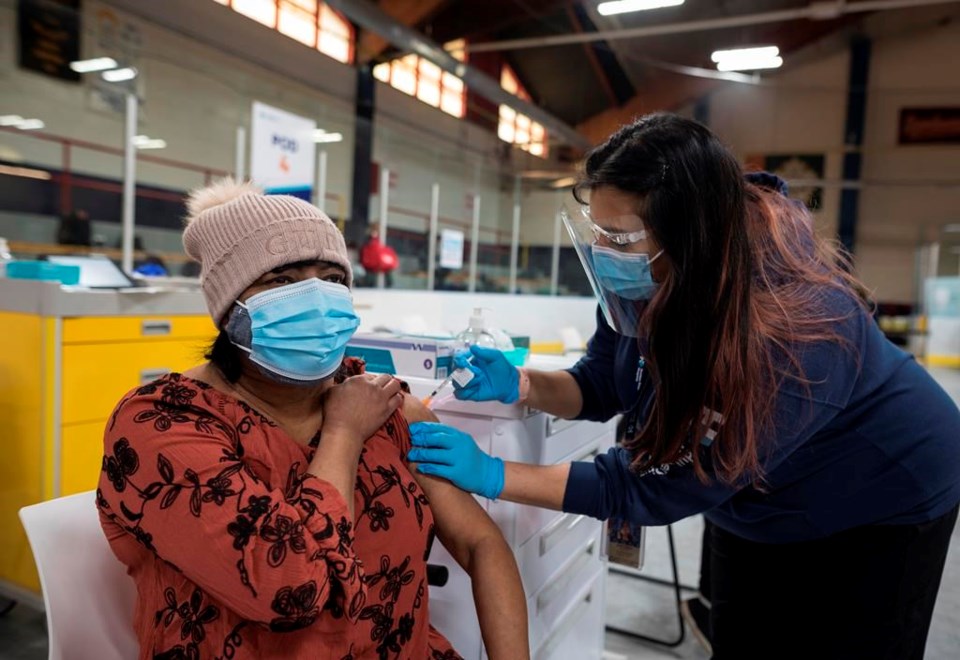 All hands are on deck at one Toronto vaccination clinic where surgeons and students alike are working together to inoculate as many people as possible in an effort to contain a tidal wave of new COVID-19 infections.

Sixty-odd nursing students have been doing a work placement at the Downsview Arena clinic, run by Humber River Hospital, helping to guide clients through the vaccination process, said 27-year-old Jessica Su, who's in her fourth year of nursing school.

"I honestly feel like it's a privilege to be able to help out in the front line and be a part of this moment," she said.

Chatting with those about to receive their shots is one of the highlights, Su said.

"They'll finally be able to feel safer out there and see their grandkids and other family members," she said. "It just means a lot to us when we hear those stories."

She's working at the clinic at a time when it's more critical than ever.

Ontario has thrice broken its record for daily COVID-19 case counts this week, driven by highly contagious variants of the virus. Hospitalizations and ICU admissions are also at an all-time high.

While daunting, the placement has immersed Su in the front lines, teaching her valuable lessons about time management and sanitation, she said.

The clinic, it seems, is happy to have the students, too.

There were mini-graduation ceremonies for them at the arena on Thursday and Friday, where students received cake and kudos.

"It was really lovely to be acknowledged by our managers," Su said. "...None of us are probably going to get a graduation this year because of the pandemic. It's going to be virtual."

Ruben Rodriguez, who manages the clinic, said it was the least they could do to honour the students, who have been there since January.

"That cake was merely a symbol of the recognition they deserve for the amazing job they have done," he said. "The future of nursing is in the right hands."

He said that at first, he was worried the nursing students wouldn't get anything out of the placement, but it turns out it's been beneficial for everyone.

"They told me, 'this has been the best placement I have had. I had to use my critical thinking, my assessment skills, and also my patient relations, communication and education of the patients.'"

Rodriguez said he's also overjoyed to be part of the vaccine drive, after running Humber River Hospital's testing program earlier in the pandemic.

"When we were doing testing, we got to see people concerned with their health waiting for the results," he said.

"And now to see the mental health impact and the emotional impact the vaccines have, not only for the people receiving the vaccines but also for the staff, that's very rewarding."

But the experience can be frustrating at times, too, Rodriguez said.

"It remains a struggle that the supplies are not constant and not at the amount that we need," he said.

But in spite of those setbacks, the experience has been overwhelmingly positive, said Dr. Nathalie Adabachi, a family physician who also works as a surgical assistant at Humber River Hospital and as an investigating coroner in west Toronto.

Non-urgent surgeries have been cancelled or postponed to make room for more COVID-19 patients, freeing up some of Adabachi's time.

She and her colleagues are filling it by consulting with COVID-19 outpatients, helping in the ICU and getting shots in arms.

"The goal is to get as many Canadians vaccinated as quickly as we can," Adabachi said. "And so as a vaccinator, putting the vaccine from arm to arm, you really do feel like you're getting one step closer to that particular goal."

While administering vaccines is part of Adabachi's role as a family physician, it's not one of her primary responsibilities.

But she said she and her coworkers -- including nurses, administrators and students -- are used to working as a team to get things done quickly, so the transition was mostly seamless.

"Doing it in such a large scale actually has been an incredible experience," she said. "To witness firsthand the rush and excitement and relief from patients, as they receive their first doses, it's unlike any other immunization ever."

This report by The Canadian Press was first published April 16, 2021.