MONTREAL — Premier Francois Legault on Friday warned against travelling to Montreal or the Eastern Townships — the two hardest-hit regions in the province for COVID-19 — and urged people who lived in those two hot spots to stay there.
0
Mar 27, 2020 5:23 PM By: Canadian Press 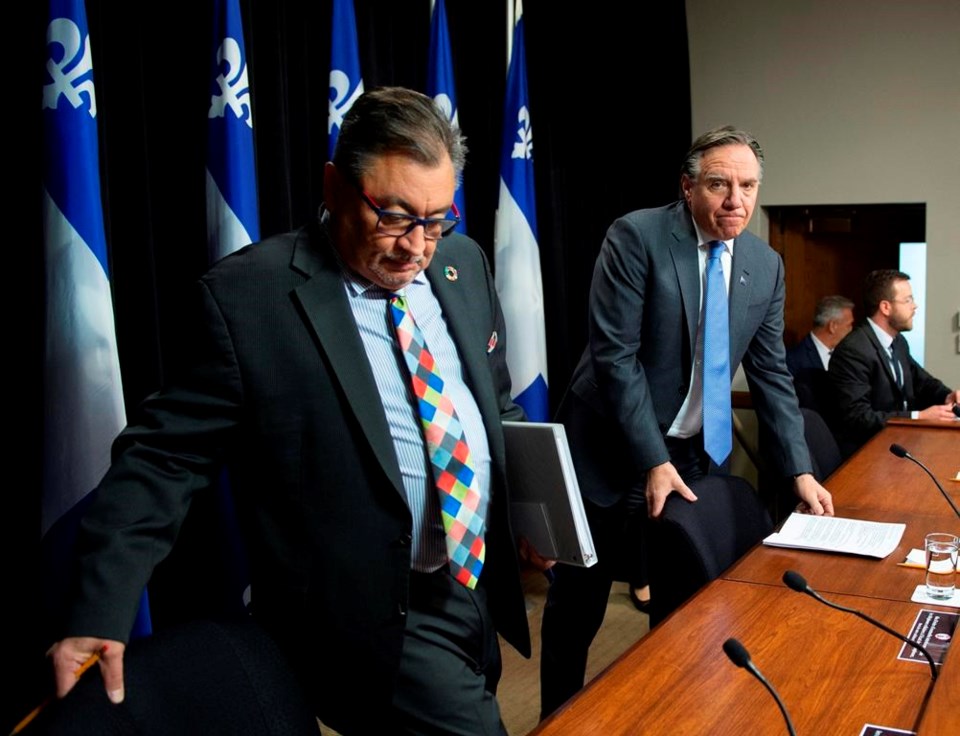 MONTREAL — Premier Francois Legault on Friday warned against travelling to Montreal or the Eastern Townships — the two hardest-hit regions in the province for COVID-19 — and urged people who lived in those two hot spots to stay there.

Legault announced 10 more people had died of the disease in the province, bringing the death toll to 18. Quebec recorded another 392 positive cases compared with the day prior, Legault said, for a total of 2,021.

The spike in cases prompted premier to issue a warning to Quebecers — already told not to travel between regions unless necessary — to avoid Montreal and the Eastern Townships regions, which account for nearly 60 per cent of the province's confirmed cases as of Friday.

"I'm asking people living in Montreal and the Eastern Townships to stay in those regions and people from other regions not to go," Legault said. "They are more infected — they have more cases in (terms of) percentage of the population compared to the rest of Quebec."

Later in the day, Montreal declared a state of emergency at the behest of the province's director of public health.

The state of emergency declaration also gives the city the ability to spend money more easily as well as the authority to order police and firefighters to enforce public health directives, Plante said.

"At this moment, the most vulnerable in our society need us," she told reporters. "The situation in day centres and shelters is very difficult, so it was important for us to find rapid and efficient solutions."

The city plans to open outdoor day centres and shelters with fewer beds for the city's homeless. Plante also wanted to dispel concerns the city was about to restrict the movement of citizens.

"The city is not under lock down nor is it in quarantine," Plante said. "If this happens one day, it'll be at the request of the Government of Quebec and the Health Department, and if it happens, it will be done in a coherent and orderly way — we're not at that point at all."

The province reports that 141 people in Quebec are in hospital, with 50 in intensive care.

Dr. Horacio Arruda, Quebec's director of public health, said it's unclear why Montreal's west-end districts and suburbs are particularly hard hit. He hypothesized that those communities may have more ties to areas such as New York State, which has one of the highest infection rates in the United States.

Mayors in Quebec's popular weekend getaway communities in the Laurentians urged potential visitors to stay away.

The mayors of Mont-Tremblant and Val-David, Que. made the request after many people — including out-of-province visitors — flocked to the communities last weekend.

Mont-Tremblant Mayor Luc Brisebois said Thursday in a statement that all events are cancelled this weekend and implored people with chalets or country homes to choose one residence and stick to it.

"By commuting, you could further spread contamination in the Laurentians region and this is what we want to avoid," Brisebois said.

Earlier Friday, a leader in Montreal's Hasidic Jewish community confirmed a member was the first person to die of COVID-19 in the city.

Max Lieberman, with the Council of Hasidic Jews of Quebec, said the 67-year-old victim started exhibiting flu-like symptoms Sunday, had difficulty breathing Tuesday night and died Wednesday after being put on a ventilator in hospital.

Lieberman said the family had a private, graveside funeral service instead of the more typical large affair given rules forbidding gatherings amid the COVID-19 outbreak.

"Normally there would be hundreds of people, but it was a very small funeral, ten or 12 people," Lieberman said, adding mourners were able to listen to eulogies over the phone.

Lieberman said the community is on edge because many of its members had recently participated in large gatherings for a religious holiday, just prior to the introduction of widespread isolation directives by health authorities.

As each day passes since Purim festivities, Lieberman said he's thankful there hasn't been an uptick of cases.

"With the help of God we'll get over it, hopefully in the next few weeks, and life at one point will be able to return to normal," Lieberman said.

This report by The Canadian Press was first published March 27, 2020.

Ontario coroner calls inquest into death of teen at school for the blind
May 29, 2020 4:00 AM
Toronto mayor says he hopes investigation into woman's death will bring answers
May 28, 2020 8:02 PM

Inspectors wouldn't go into long-term care homes fearing for their safety: Ford
May 28, 2020 7:16 PM
Comments
We welcome your feedback and encourage you to share your thoughts. We ask that you be respectful of others and their points of view, refrain from personal attacks and stay on topic. To learn about our commenting policies and how we moderate, please read our Community Guidelines.