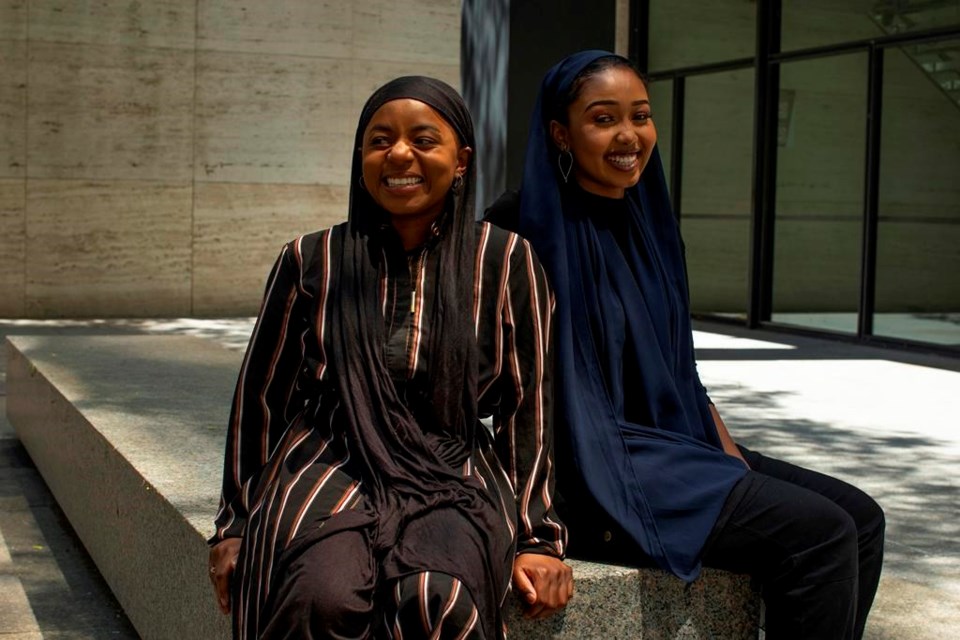 TORONTO — Zimman Yousuf and Imaan Hyman hadn't even left high school before they realized the importance of fighting anti-Black racism in schools.

The women grew up hundreds of kilometres apart — Yousuf in Toronto and Hyman in Winnipeg — but the taunts and discrimination they faced in their school halls were eerily similar.

Both heard teachers tell Black students they wouldn't achieve their dreams and saw themselves ostracized from their peers as a result of racist stereotypes.

Yousuf and Hyman decided to fight back. Last month they teamed up with other young women to launch the Black Muslim Youth Toronto initiative, which aims to highlight racial and institutional inequality across the country and create support for themselves and others.

"It's gonna take more than a village to combat anti-Black racism," Yousuf, 18, said in a recent interview. "We've been fighting for years and we will keep fighting."

Both women said they're haunted by the overt racism they experienced while attending school.

Yousuf recalled students telling her to run when police sirens were heard outside the school, as well as teachers predicting she would not get into her preferred post-secondary program — a prediction that fell flat when she was accepted to the accounting program at the University of Toronto last year.

Hyman's high school memories include overhearing a teacher telling a fellow Black student they would not get far in life and were destined to collect food stamps.

Equally seared in her memory was the time a classmate refused to play with her because of a made-up rumour that she had AIDS.

Hyman, who was the only Black student at her elementary school in Winnipeg, said she spent years trying to be inconspicuous and limit her exposure to stereotypes based on her dark skin.

"I suppressed my anger and even my humour for years," Hyman said. "This way, I wouldn't fall under the stereotypes of being either an angry Black woman or the class clown."

Her eventual move to Toronto was prompted by a desire to live in a more diverse city. Once there, she said she felt free to convert to Islam without judgment.

But Canada's diversity doesn't shield its residents from racism, both women said.

Yousuf said she continues to hear derogatory terms used against students of colour at U of T.

And both she and Hyman said another striking example emerged last month when Ontario Premier Doug Ford told reporters that Canada does not have the same "systemic, deep roots" of racism as the United States.

Ford retracted the remarks after backlash from critics and the public, acknowledging the existence of systemic racism and allocating $1.5 million to organizations that support Black youth and families.

Hyman cited the controversy as "a prime example" of how disconnected governments can be on issues of systemic racism.

For its part, the Ontario government published an Anti-Black Racism Strategy in 2017 — a year before Ford's Progressive Conservatives took office. The Liberal government of the day described the strategy as a road map for addressing racism and improving outcomes for Black communities.

Earlier this week, Ford and Education Minister Stephen Lecce announced the province intended to do away with an educational practice known as streaming, which forces students to commit to taking either applied or academic courses as soon as they enter high school.

The practice has been widely cited as a discriminatory measure that disproportionately funnels racialized and low-income students out of classes that could lead to higher education and does lasting harm to their future prospects.

Lecce cited the racist nature of the practice as the reason for the government's decision, though no details about the plan to scrap streaming have yet been released.

Lindo recalled visiting a classroom and asking Black students if they had ever been called the N-word. To her horror, all the students raised their hands in unison.

Lindo said the onus should be on schools, rather than students, to put a stop to overt racism and create safe spaces for study and play.

"Teachers need to be trained," she said. "Those coming into the system need to be better equipped. We have to change the generation of educators."

Yousuf, Hyman and other members of the youth initiative kicked off their local activism last month with a march to commemorate a 12-year-old Somali girl. Shukri Abdi's 2019 drowning in the United Kingdom has been classified as an accident by police, but deemed suspicious by her family.

Both women said they hope to expand their advocacy further afield in the months ahead.

"Our initiative brings up issues worldwide and also here at home," Yousuf said. "Racial injustices within our institutions exist here in Canada."

This report by the Canadian Press was first published July 8, 2020.