Demonstrators gather to protest treatment of migrant workers amid pandemic

TORONTO — Activists staged a demonstration in front of a government immigration office in Toronto on Sunday to protest what they say is unjust treatment of migrant workers during the COVID-19 pandemic.
Aug 23, 2020 9:42 PM By: Canadian Press 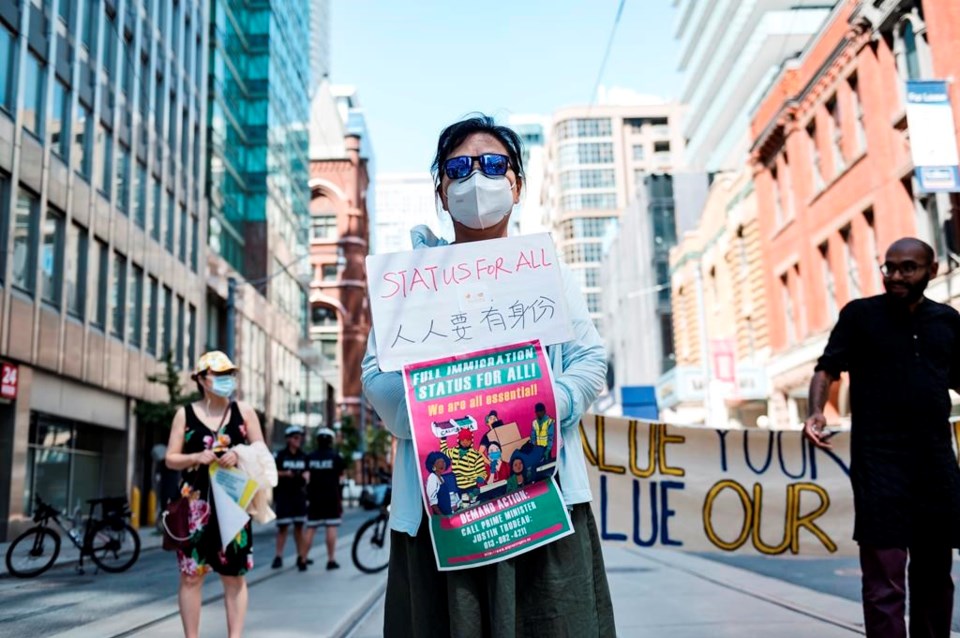 TORONTO — Activists staged a demonstration in front of a government immigration office in Toronto on Sunday to protest what they say is unjust treatment of migrant workers during the COVID-19 pandemic.

The event was organized by the Migrant Workers Alliance for Change, which for months has been advocating for migrant workers to receive the same status and benefits as Canadian citizens.

Syed Hussan, the group's executive director, said the actions are about underlining the unique issues that such workers face, and ensuring they receive equal treatment under the law.

"Migrant workers have lost lives and have lost their livelihoods due to COVID-19," Hussan said.

"If we want a really equal society, everyone should have the same status and opportunities, regardless of whether they were born here."

Demands for equal status — known as "regularization" — have come to a head in recent months as COVID-19 spread throughout several farms in Ontario, highlighting the dangers the pandemic posed to migrant workers.

Hundreds of migrant workers in the province have tested positive for the virus over the past few months and three have died.

Gabriel Flores, a migrant worker who says he was fired from his job after speaking to media about the conditions on farms, told the crowd Sunday that the situation is tilted in favour of employers.

"The employers are given too much power against the workers," Flores said through a translator. "It makes it impossible to defend ourselves."

Another speaker, Marisol Bobadilla, a former temporary foreign worker, expressed her own frustration over the self-censorship migrant workers impose upon themselves in order to keep their jobs.

"We are scared to complain and lose our job, because losing our job means losing a better life for our families."

This report by The Canadian Press was first published August 23, 2020.

Note to readers: This is a corrected story. A previous version carried an incorrect name for the Migrant Workers Alliance for Change.

Ontario seems to be moving away from worst-case scenario in COVID 2nd wave: officials
Oct 29, 2020 9:21 PM
Police north of Toronto seize millions worth of illegal pot, several exotic animals
Oct 29, 2020 9:20 PM
Comments
We welcome your feedback and encourage you to share your thoughts. We ask that you be respectful of others and their points of view, refrain from personal attacks and stay on topic. To learn about our commenting policies and how we moderate, please read our Community Guidelines.