TORONTO — Education workers in some Ontario virus hot spots will be eligible for COVID-19 vaccinations next week, the government announced Wednesday, amid union calls for all education workers to get shots as a third wave of infections surges across
Apr 7, 2021 7:06 PM By: Canadian Press 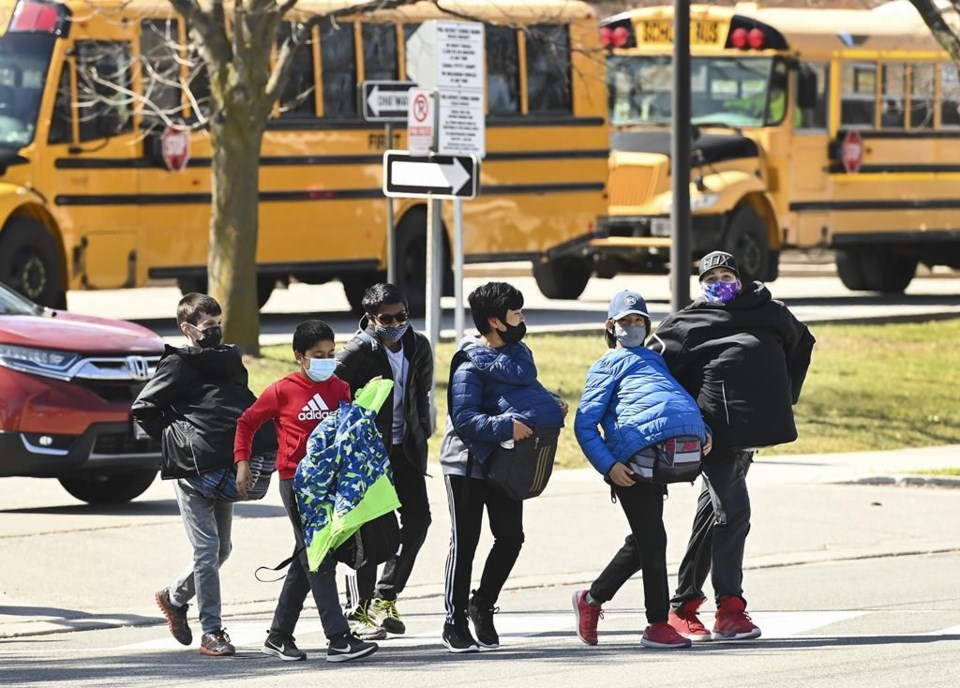 TORONTO — Education workers in some Ontario virus hot spots will be eligible for COVID-19 vaccinations next week, the government announced Wednesday, amid union calls for all education workers to get shots as a third wave of infections surges across the province.

Education Minister Stephen Lecce said any education worker who lives or works in a Toronto or Peel Region postal code identified as having a high rate of infection will be eligible during the April break set to begin next week.

Staff who work directly with special education students can also book shots during that period. The government said staff will become eligible in hot spots in other regions including York, Ottawa, Hamilton, Halton and Durham as supply allows. The plan will later expand across the province.

"We continue to work in partnership with Ministry of Health to get these vaccines into the arms as many staff as possible," Lecce said.

"I just want to assure every worker in the province in our schools, driving our buses and helping to protect our kids: You are going to get access to the vaccine, full stop."

He said how people will be able to book appointments was still being worked out.

The union representing public sector employees applauded the news that education workers in hot spots will be vaccinated.

“Education workers, who are the very soul of our schools, are finally getting the recognition and support they deserve,” said Warren Thomas. “We are thrilled to see our hard-fought advocacy pay off and commend the government for listening to front-line workers.”

The province's commitments stopped short of demands from teachers' unions, who have asked for schools to be closed across the province and vaccinations offered to all education workers until safety can be guaranteed.

"Immediate steps must be taken to ensure the safety of education workers and students in hot spot areas including a temporary move from in-person to virtual learning," said Sam Hammond, president of the Elementary Teachers Federation of Ontario.

He thanked public health officials in Toronto and Guelph, Ont., for moving their schools to virtual learning on Wednesday. He also praised Peel Region's top doctor for shifting to online classes on Tuesday.

Hammond said that about one in four schools in Ontario has an active COVID-19 case but that the true number of infections is probably larger.

"The incidents of cases in schools is likely much higher but because the government has failed to provide sufficient access to asymptomatic testing we simply don't know to what extent."

Lecce said that mandatory asymptomatic testing hasn't been recommended by the province's top doctor, and pointed to targeted, voluntary testing initiatives already offered in some areas.

All of the educational worker unions called for mass vaccinations of school staff as soon as possible. Hammond said that his union was open to mobile immunization clinics vaccinating staff on site.

Laura Walton, president of the Ontario School Board Council of Unions, which represents non-educational staff, said that even with schools closed to in-class learning employees could still be at risk.

"We had seven out of eight custodians (in Thunder Bay, Ont.) contract COVID-19 while not a single student was in the school, yet they still had the (personal-protective equipment), they still were following all of the precautions," said Walton of the last time Ontario closed schools after the winter holidays.

"This idea that if schools are closed everyone is safe and nothing is going to happen is not truthful."

This report by The Canadian Press was first published April 7, 2021.