TORONTO — Ontario's overworked and underpaid personal support workers will soon be receiving government assistance, the province's premier said Thursday as he heaped praise on a group who have been on the front lines of the fight against COVID-19 in
Aug 6, 2020 6:57 PM By: Canadian Press 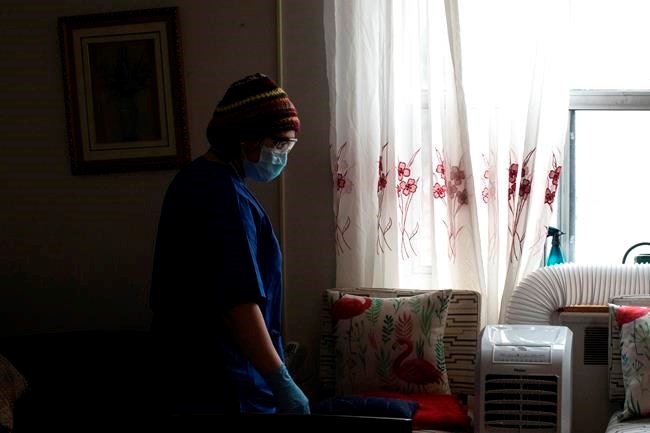 TORONTO — Ontario's overworked and underpaid personal support workers will soon be receiving government assistance, the province's premier said Thursday as he heaped praise on a group who have been on the front lines of the fight against COVID-19 in long-term care homes.

Doug Ford said recent conversations with PSWs at his mother-in-law's long-term care home in Toronto shed light on the conditions many are working under. He said he's aware that many go unpaid for their overtime hours.

"They are grossly underpaid in my opinion," Ford said at his daily news conference. "We're going to sit down and we're going to come up with a solution to support these people."

Ford did not offer an estimate as to when a plan of action might be ready or any measures it could contain.

But personal support workers have figured prominently in the fight against COVID-19 since the outbreak shifted into high gear in Ontario, prompting the government to impose new rules as case numbers soared in long-term care homes and other congregate-living facilities.

In mid-April, nearly a month after a provincial state of emergency was first declared, Ford announced health-care providers including PSWs would be forced to work in only one long-term care facility at once. At the time, many stated they held multiple jobs at more than one home in order to make end's meet.

Any changes Ford puts into effect must address the precarious working conditions and financial instability that many support workers struggle with on a daily basis, according to one health-care union that includes PSWs among its members.

Stewart also called on the government to reverse policies enacted during the COVID-19 crisis, such as wage freezes and a bill that grants the government permission to deny or cancel vacation requests.

The province's official Opposition agreed, with New Democrat Leader Andrea Horwath calling on Ford to back up Thursday's words with immediate action.

"PSWs don't need Ford feigning surprise at how hard they work," she said in a statement. "Staff are paid barely above minimum wage and they're often stuck trying to put together part-time jobs without benefits at several homes just to make ends meet. ... we need to do better for all PSWs across the system because it hurts staff and seniors in nursing homes."

But the Ontario Personal Support Workers Association said it was "very encouraged" by the announcement.

"The OPSWA is looking forward to continuing our work with the government to ensure all Personal Support Workers are encompassed in this promise," Miranda Ferrier, the association's president, said in a written statement.

Meanwhile, Ontario reported 95 new cases of COVID-19 on Thursday, along with one new death.

The number of resolved cases also continued to outpace new ones, with provincial data showing 159 more classified as recovered in the past 24 hours.

Ontario has recorded 39,809 total cases of the novel coronavirus, along with 2,783 deaths.

Ontario Chief Medical Officer of Health Dr. David Williams said he was encouraged by the recent trend, adding he believes daily case loads could fall below 50 as early as next week.

As the provincial tally continued its downward trajectory, however, a southwestern Ontario health unit reported a new cluster linked to a recent boat trip.

Chatham-Kent Public Health said it's identified 12 cases connected to the days-long excursion out of the region, which purportedly involved multiple households.

The public health unit said it is currently working on tracing contacts for the infected patients, but noted that the number is "very large."

"We are still in a pandemic, and the potential for rapid spread of COVID-19 is very real,” regional medical health officer Dr. David Colby said in a statement. "Social circles are a maximum of 10 people for good reason; with everyone else we must physically distance."

This report by The Canadian Press was first published Aug. 6, 2020.

Flu shot campaign first pillar of Ontario fall pandemic preparedness plan: Ford
Sep 22, 2020 2:52 PM
Quebec raises COVID alert level for three more regions, including Laval and Outaouais
Sep 22, 2020 2:13 PM
Comments
We welcome your feedback and encourage you to share your thoughts. We ask that you be respectful of others and their points of view, refrain from personal attacks and stay on topic. To learn about our commenting policies and how we moderate, please read our Community Guidelines.