TORONTO — Mohamed-Aslim Zafis spent his last hours as he did countless ones before — volunteering at a northwest Toronto mosque and helping those in need.
Sep 16, 2020 4:45 PM By: Canadian Press 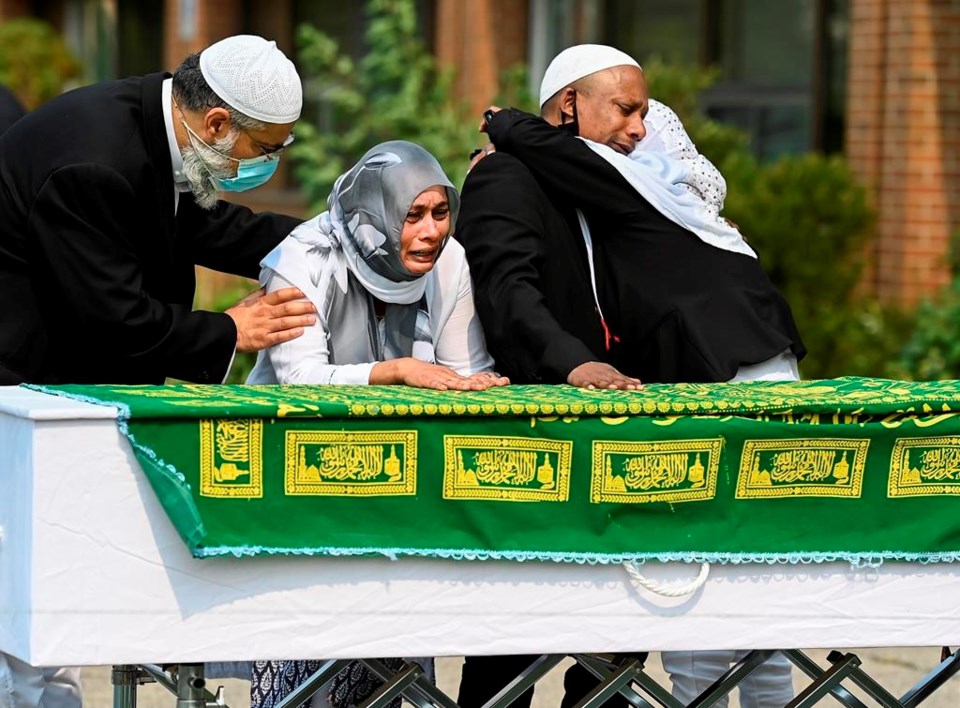 TORONTO — Mohamed-Aslim Zafis spent his last hours as he did countless ones before — volunteering at a northwest Toronto mosque and helping those in need.

Zafis, 58, was remembered by friends and family at his funeral on Wednesday as a "kind, gentle soul" who, even on the day he was killed, handed out food to the hungry and worked to keep his fellow worshippers safe.

"He was an incredible man," Zafis's nephew, Zahir Zafis, said through tears.

"He never had any negative thoughts or words."

Several hundred mourners gathered in the parking lot of the International Muslim Organization in Etobicoke to say goodbye to Zafis, just metres away from where he was stabbed to death on Saturday evening.

The attack — which police have said bears many similarities to another killing just days earlier — happened as Zafis was controlling entry to the mosque.

He had just finished saying the sunset prayers before he returned to his usual post outside the mosque, where he ensured everyone who entered wore a mask and respected COVID-19 physical distancing rules.

Imam Ayman Taher said he chatted with Zafis just minutes before the attack, when they discussed a local Syrian family who had just lost a child. Zafis had prepared food for the family, he told Taher, to help them through the difficult time.

Giving food was important Zafis, his friends said. He spent years volunteering at a nearby food bank, preparing hampers for the hungry, and recently held a drive-through barbecue for children before they returned to school, Taher said.

He also kept candies in his pockets that he gave out to children as a treat.

Zafis was born in Guyana and still has many family members there, his nephews said.

The parking lot at the mosque was a place of love for Zafis, said Mustafa Farooq, the CEO of the National Council of Canadian Muslims.

"It was here in the parking lot he'd sit with his friends and sip Pepsi with lemon slices," Farooq said.

"He'd distribute food to the poor, to the needy, in this parking lot."

Zameer Zafis said his uncle devoted much of his life to his faith.

"He found peace and happiness doing the work of Allah," he said.

"We also ask of you at this time to pray that this individual be brought to justice, but also to forgive him for the sin that he has committed."

The head of the Toronto police homicide squad said Monday they have no evidence Zafis's killing was motivated by hate, but acknowledged it is a possibility. Insp. Hank Idsinga also said police cannot discount the homicide could be the work of a serial killer.

The mosque has urged its worshippers to remain vigilant of their surroundings.

"No one can intimidate us and prevent us from attending our place of worship," Taher said.

"We are taking every measure possible," he said.

This report by The Canadian Press was first published Sept. 16, 2020.

Ontario officials report 335 new COVID-19 cases, three additional deaths
Sep 23, 2020 10:54 AM
Comments
We welcome your feedback and encourage you to share your thoughts. We ask that you be respectful of others and their points of view, refrain from personal attacks and stay on topic. To learn about our commenting policies and how we moderate, please read our Community Guidelines.