TORONTO — A worker shortage could threaten the harvest of some crops across Ontario, groups that advocate for farmers said Wednesday, as Premier Doug Ford acknowledged his government has discussed creating incentives to address the issue.
Jun 3, 2020 4:58 PM By: Canadian Press 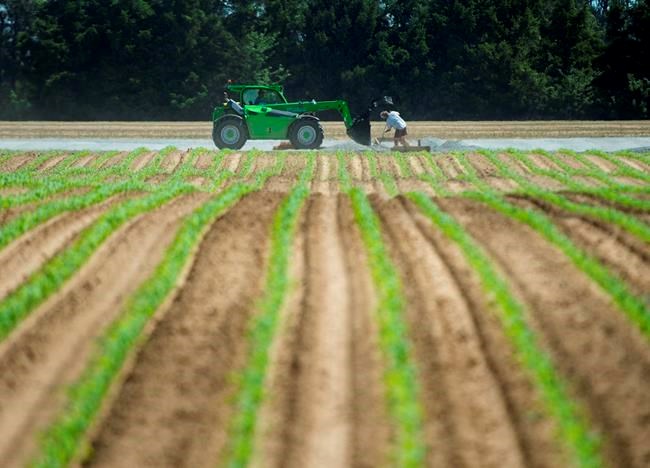 TORONTO — A worker shortage could threaten the harvest of some crops across Ontario, groups that advocate for farmers said Wednesday, as Premier Doug Ford acknowledged his government has discussed creating incentives to address the issue.

The Ontario Federation of Agriculture, the Canada Horticultural Council and the Ontario Greenhouse Vegetable Growers said the shortages exist on many farms across the province because of the pandemic.

The groups are urging the federal and provincial governments to provide resources to farmers to attract local workers and provide greater access to harvest equipment and more personal protective equipment (PPE).

They say COVID-19 has affected the flow of temporary foreign workers into the country despite the federal government deeming them essential several months ago.

"We've become pretty well totally reliant on these workers to be the backbone of fruit and vegetable production in Canada," said Brian Gilroy, the president of the Canada Horticultural Council.

A Statistics Canada report released Wednesday said that while the migrant workers represent less than three per cent of Canada's total workforce, they made up over a quarter of the country's employees in crop production in 2017.

In Ontario, temporary foreign workers represent over 40 per cent of agriculture employees, the report said.

The report also notes that the flow of the migrant workers into the country continues to be affected by the pandemic, in part because of travel restrictions put in place by source countries.

"This may have a particularly strong effect on the agriculture sector, given that the timing of pandemic coincides with the period of highest demand for seasonal agricultural foreign workers who primarily come to Canada in the spring and early summer," the report said.

Last month, the Quebec government appealed to workers who lost their jobs because of COVID-19 to seek out work on local farms to address a labour shortage there.

Premier Francois Legault said the government would make the work more attractive by adding $100 a week to what farmers pay.

On Wednesday, Ford said his government has contemplated creating a similar program, but offered no further details.

"We've had this discussion and even before this pandemic we were short, just in Ontario, over 250,000 workers to fill positions right across this province," he said. "I've talked to many farmers about this."

Ford said the province has provided over $2 million to farmers to help them buy personal protective equipment.

"It's critical for the safety of the food supply chain as well," he said.

A spokeswoman for Ontario's Agriculture Ministry said the province has also partnered with the federal government to spend a million dollars to help farmers recruit and train workers and created a job portal for the agri-food sector that has been visited more than 250,000 times.

Approximately 20,000 migrant workers come to Ontario each year from Mexico, Guatemala and the Caribbean to work on farms and in greenhouses.

The shortages have been exacerbated by the pandemic as dozens of migrant workers have tested positive for the virus and had to self-isolate.

Outbreaks have been reported on farms in Chatham-Kent, Windsor-Essex, Niagara Region and Elgin County.

At least one migrant worker in the province has died of the virus and an outbreak in Norfolk County at Scotlynn Group has seen 184 workers test positive.

The president of the Ontario Federation of Agriculture said the owners of that farm spent hundreds of thousands of dollars isolating their workers in local hotels after they arrived in Canada,but workers later contracted the virus.

"Essentially, they've shut down their asparagus harvesting," Keith Currie said. "So they have now essentially almost lost that crop."

"I've been asking, please make sure that we have adequate access to the proper equipment going forward so we minimize any kind of opportunity for an outbreak during harvest periods," he said.

Gilroy, who owns an apple orchard near Owen Sound, Ont., said data from the horticultural council's members taken earlier this month suggests that just under 80 per cent of temporary foreign workers have been able to come to Ontario this year.

That could spell trouble for berry and asparagus harvests this summer, he said.

"Farmers are very nervous about the investment that's required to grow a crop, and the thought of not having workers available to harvest it is very disconcerting," he said.

He said finding local help isn't always easy because the work is difficult, and also requires some skill and training.

"You can imagine spending eight to 10 hours a day, picking small apples off a tree or harvesting cucumbers — or harvesting almost anything — it's repetitive work," he said.

"While there are many job-matching sites that have been created to pair farmers with potential employees, we have yet to see effective employee-directed incentives be established," spokeswoman Justine Taylor said in a statement.

This report by The Canadian Press was first published June 3, 2020.

Public health poll probes Quebecers' perceptions, conspiracies on COVID-19
Aug 3, 2020 3:15 PM
Comments
We welcome your feedback and encourage you to share your thoughts. We ask that you be respectful of others and their points of view, refrain from personal attacks and stay on topic. To learn about our commenting policies and how we moderate, please read our Community Guidelines.